Kevin Smith’s Masters of the Universe Has Magic and Mayhem… 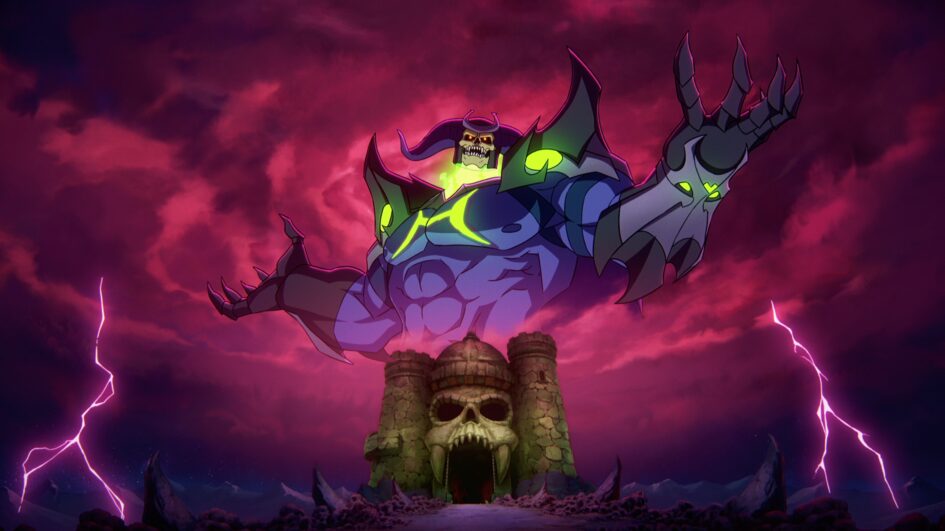 Skeletor (as voiced by Mark Hamill) becomes a god by the conclusion of the fifth episode in the Netflix animated series, Masters of the Universe: Revelation. Photo Courtesy: Netflix © 2021.

Per Matt
…But He-Man’s mostly MIA through Part One (the first five episodes) of the Netflix animated series, Masters of the Universe: Revelation. Sure, he appears in the pilot and through brief flashbacks here and there, but the basis for this reboot seems to be girl power, as the story mostly follows a disillusioned Teela who’s had all she can stomach from the royal family and the secrets therein.

After achieving the Man-At-Arms title to lead Eternia’s Army, she fails to prevent Skeletor from entering Castle Grayskull. Prince Adam sacrifices his life by revealing his He-Man secret in order to save the universe. In doing so, his revelation upsets Teela, who’s got got plenty of demons to spare. Is she still considered a teenager after all these years? Out on her own adventure, she’s joined up with a girlfriend. Together, they take a deep dive into Teela’s personality (as voiced by Sarah Michelle Gellar), where there’s plenty of misunderstood darkness.

As a self-proclaimed Child of the ’80s, I was tickled neon pink that Kevin Smith was interested in resurrecting one of my favorite toy lines as a kid. The original television series was totally cheesy, but fun. It was used mostly to sell merchandise, so it was considered a success. My fanboy heart nearly exploded when Mike Young brought our mighty heroes back to life for some adult-themed adventures. While nothing truly lasts forever, those tales only lasted for two years, but I had hoped there were more stories left to tell.

Apparently, Smith took it upon himself to reimagine the characters, as if they existed today, appearing in this selective sequel. Not sure that’s the direction I would have taken the franchise, but I was definitely hopeful.

Much of what you may have remembered from the original show exists in essence, in order to move the storyline forward. For that to happen, tales are spun from deep within the show’s original mythology, as legends of the franchise receive in-depth stories for the first time. There’s the Council of Elders, the Hall of Wisdom, Preternia (heaven), Subternia (the Land of the Dead) and He-Ro, among others. Since I haven’t returned to that series since I was much younger, I couldn’t remember many of these elements from this world, but they did sound believable.

So many of my favorite action figures, vehicles and playsets are remembered, somehow with an all-new storyline that I’ve mostly enjoyed. However, as the story develops, way too many of them keep getting killed off. That is a major bummer. Themes of reincarnation eventually blossom and what’s left is a shell of nostalgic references, replaced by a woke culture that feels incredibly out of place.

“The end is merely the beginning… and only in death am I truly living.”

The Line of Demarcation separating old-school magic and futuristic technology is paper-thin, here. Mystical energies have died in Eternia and soon the universe will die along with all of its magic, unless the Sword of Power can be reunited from heaven and hell. Lost with it is He-Man and Skeletor. And so is a lot of my interest in this reimagined sequel series.

This show revolves around secrets. Dark secrets. Dangerous secrets. And there’s unlikely alliances, along with new enemies and the occasional frenemies. Good and bad characters are no longer as discernable as black and white. They all seem to lurk within the gray shade, once their leaders disappear. I found that part interesting. The social politics, I could do without.

The voice work; however, is some of the best attributes of the series. Henry Rollins as Tri-Klops, a techno-god leading his cult, was a genius decision. Alan Oppenheimer (as Moss Man) was a great shout-out to the original voice of Skeletor. Kevin Conroy departed Gotham to lend a voice to Mer-Man and Lena Headey brought new depth to Evil-Lyn. Tony Todd, Alicia Silverstone and Phil LaMarr have great moments, as well. The same can’t be said about Griffin Newman’s Orko, Justin Long’s Roboto (If you can’t say anything nice…) or Mark Hamill’s Skeletor’s (via his very familiar Joker persona). I wanted to enjoy Gellar’s voice work so much, but Teela’s tiresome character stood in the way.

There’s also a one-episode aftershow, much like Talking Dead, that goes behind-the-scenes to bring stories from the stars directly to the fans. This was cool and something I’d love to see more through the streamer.

Final Thoughts:
Zombies appear and for the first time ever, Skeletor gets to raise the Sword of Power and become a god (“Skelegod”). After sacrificing his life for the good of the universe, Adam leaves paradise in order to help old friends, only to get stabbed in the back by Skeletor (and potentially get killed a second time within five episodes! I do have high hopes for the storyline to improve in this fan’s mind and for more familiar faces to make more than just cameos. I am enjoying watching this show (at times). I’m just hoping the characters can somehow recover from that doozy of a cliffhanger.

I’m curious if this round of He-Man publicity is Mattel’s thank you to long-time fans of the show, or just a promotion for all-new toys? I’m also curious how long this series can last, as major characters are getting killed off left and right. Just how can it actually survive multiple seasons with a revelation this big? And somehow will it get retconned into the new She-Ra series?

This new version of the Mattel characters feels like it may have evolved from Filmation, although it’s definitely adapted for the modern day. I am hopeful to see where the overall storyline takes these characters and hopefully, there won’t be so many deaths of major characters!