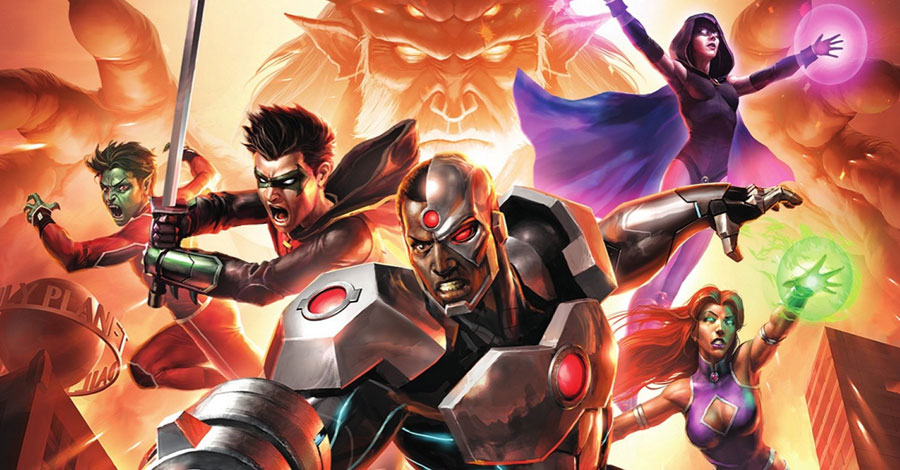 The film takes place in a modified New 52 DC Universe based on Superman and Wonder Woman’s costumes. Making up the Justice League are Batman, Superman, Wonder Woman, Flash and Cyborg. Along for the ride is Robin, Damien Wayne, son of Bruce Wayne and Talia al Ghul.

Damien, having been trained by the League of Assassins, is a ruthless, cold and angry child. He is as calculating as Batman on his worst days, except with no restrictions to murder. Damien would rather kill than capture, preferring a forceful victory. Robin feels he is little more than a cattle prod, directing bystanders out of danger, prompting him to step way out of bounds to end the first scene’s supervillain threat.

Because of this disagreement in combat styles, Batman forces Robin to join the Teen Titans to learn teamwork and here is where the story really begins. This movie is a Titans tale, with a cameo by some of the Justice League. There is little resemblance to the absurd Teen Titans Go, although Robin is still pompous. 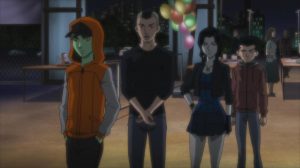 The Titans roster is made up of an adult Starfire, team leader/mentor, and teenage Beast Boy, Blue Beetle and Raven. There is a quick cameo by Nightwing, the former Robin, Dick Grayson. Damien’s introductions with the team are stereotypical posturing, and it is behavior one would expect from a teenager. Yet the interactions, which eventually result in inter-team combat, are hackneyed. They squabble over pettiness.

Due to the vast amount of characters, most get lost or seem like set pieces than heroes. The film focuses on Damien and Raven. We see the transformation of Damien into a team player. The audience is also told Raven’s origin story. Beast Boy and Blue Beetle are relegated to sidekicks on team originally formed as a team of sidekicks. It’s a waste as the voice acting is superb, each Titan portraying the angst and anxieties of their age rather well.

On a trip to an amusement park for a fun team-building excursion, the film uses some pop music during the montage, giving it more of a teen-movie feel. Robin and Beast Boy test their skills on a Dance Dance Revolution-style video game. And when trouble appears, Starfire, Beast Boy and Beetle change into their superhero costumes in a Sailor Moon-inspired transformation sequence that feels way out of place.

The versus between the League and the Titans is short lived. Once the League members regain their composure, the cast teams up against the big threat. There are many missed opportunities for scenes between the Titans and the League, as the movie is so Titan-centric. But with so many characters, it might slow up the pacing.

Overall, the movie was fun, but not quite compelling. Too many characters. Too much teen drama. Weak plot. Highlight: Batman injects himself with a paralyzing serum created to combat Bane, rather than be possessed by demons.

The teenage team coming-together story was trite and oddly presented. This incarnation of the Titans has great potential and DC Animation hints at a sequel in a short post-credits scene. With a greater focus on one set of heroes, the next Titan feature has great promise.