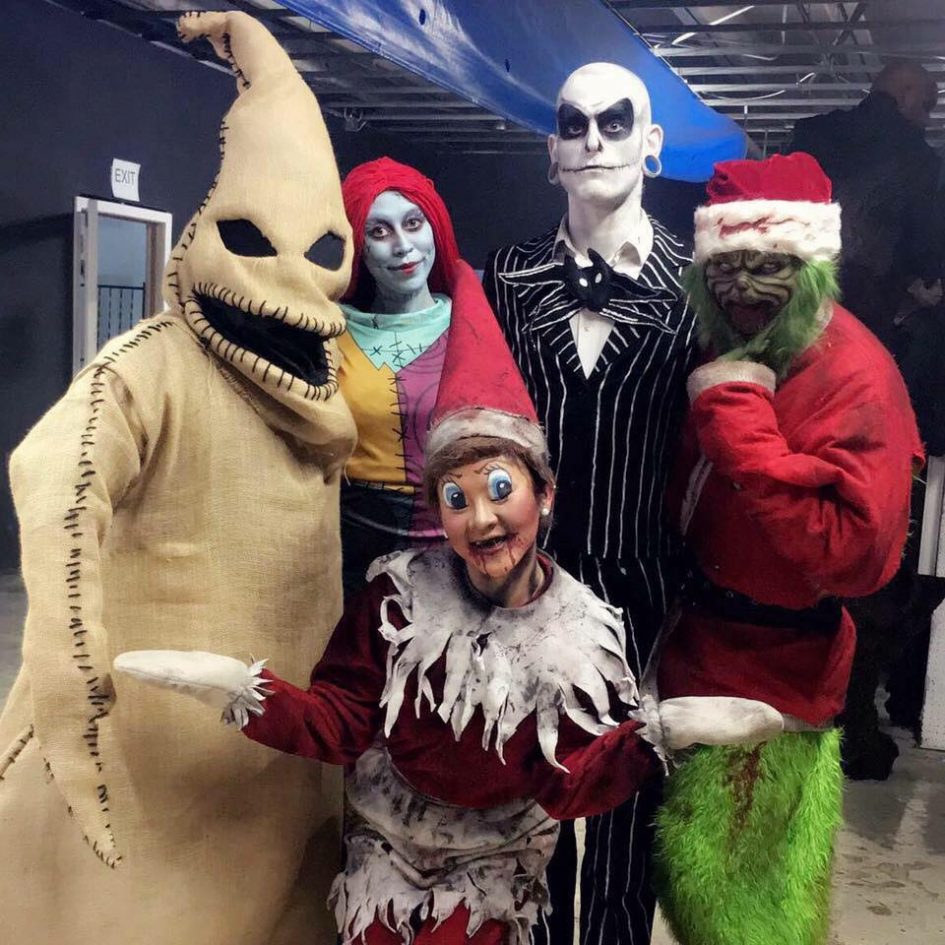 Welcome back to another great blog from #hauntlife. This week I am going to review the recent Krampus Christmas haunt at Nashville Nightmare. As always, when I review Nashville Nightmare, I want everyone to know that I do work for this haunt, so my opinions here may be biased some, but they only reflect myself and not any other person related to Nashville Nightmare.

Yeah, I know: legal jargon and stuff can be boring. But I like being on the up and up when I post reviews of haunted houses.

When I found out what our theme was going to be this year, I was kinda excited. Carroll Moore, one of the main people with Nightmare, told me that the haunt was doing Krampus, but not just any Krampus. He explained that we would be partnering up with several other haunted attractions across the country to put on a national event. Intrigued, I decided to do a little further research on who we would be teaming with. I mean, come on! If you were a member of the Avengers, wouldn’t you want to know more about your newest members? 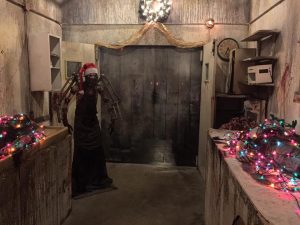 It turns out that we were teamed up with Massive Noise yet again. This talented group was the brains behind our Zombie Apocalypse Live event, back during the summer. Massive Noise works with several haunted houses, including House of Torment, 13th Floor and Terror on the Fox. This company works with each haunt to not only come up with a cohesive story, but also in acquiring props and costumes. While each haunt still retains its own creative control for the most part, the ability to work together and share ideas and props makes the events from Massive Noise truly amazing.

Our “Krampus Haunted Christmas” event brought out many of the creepiest creatures and best sets we have ever produced. As soon as guests entered the property, they were under the ever-watchful eye of the 15-foot-tall Pumpkin King, decked out with his own Santa hat. Not to be outdone by a giant animatronic, scare actors dressed as Jack Skellington, Oogie Boogie and a wisecracking Grinch posed for photos with guests, while a crazed Santa chased them down with his chainsaw. Krampus, himself, standing almost 10 feet tall, roamed the queue line, stirring up screams and bringing chills to all who 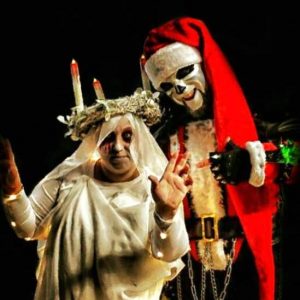 Once inside the building, guests saw a brand new entrance, leading directly into the halls of Ebenezer Scrooge’s manor. Before they could enter, evil elves offered to take their photos with Nashville Nightmare’s resident mascot, Eerie Ghoulsby Von Diabolic, along with his life-sized Elf
on a Shelf. After their photos were done, it was time for Ebenezer to plunge them into the dark halls of his estate. Inside the mansion, guests were accosted by the spirits that haunted Scrooge. Jacob
Marley silently stalked them in the halls. The Ghost of Christmas Past burst through the walls, glowing with the eerie lights of the candles attached to her. The Ghost of Christmas Present blared a warning of things to come. And the Ghost of Christmas Yet To Come awaited visitors in the snow-covered cemetery. But the journey was only just beginning, as now the survivors of our nightmarish Christmas Carol journeyed into the depths of Krampus’ lair. Several lesser minions of Krampus chased down people as they worked their way through the darkened hallways. The Cult of Rudolph, a clan of fanatics covered in reindeer skins, shouted greetings of discomfort. Even the toys came to life in horrific fashion, lashing out with clawed hands and screeching sounds only heard on the seventh level of hell. And just when they thought they were safe, they entered the final lair of Krampus, himself. More devilish elves slithered across the floor like satanic serpents, while Krampus gnashed his teeth, trying to devour the guests before they could escape.

I had the fortune of providing some of the music used inside the haunt, as well as the queue lines. Let me tell you, it is not easy to find good, scary Christmas music. Whenever possible, we want to have a good mix of traditional scary music, along with some energetic grooves. Thank God for Twisted Sister, Alice Cooper and Korn for making some great choices. Their music fits in great with sounds from haunted house staple Midnight Syndicate and some fun songs from The Cryptkeeper. Throw in a few faux commercials and the night is complete! I just wish I had time to reprogram our version of Ralphie from A Christmas Story to say some new lines Carroll Moore wrote up, but there is always next year.

The only thing that was bad about this event was the weather. Friday night, it was extremely cold. I think the temperature got down into the 30s at one point. And the wind cut straight to the bone. Then Saturday came and the temperature at the start of the show was a balmy 70 degrees. I kept an eye on the weather (along with the people in the control rooms), as we were under a severe storm watch. But luckily, the storms held off to right at closing time. Between 10 and 11 p.m. the temperature dropped 30 degrees back to the 40s. Heavy rains began, along with a howling wind that took down one of the set pieces in the parking lot, and was endangering our gigantic Pumpkin King (who we had tied down to the bus behind him, prior to the evening). It seems that all four seasons hit Nashville Nightmare in one weekend. Got to love Tennessee weather! 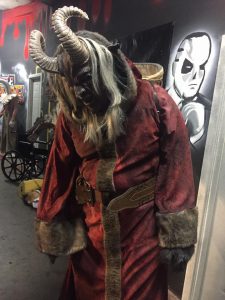 I visited the haunt a week later. All of the Christmas decor was down. The Krampus scene was gutted, leaving an empty room. Everything was back to normal. And it’s a good thing, because in less than a month, Nashville Nightmare will be one of the three haunted houses on the HauntCon 2017 tour. Haunters (both professional and home based) will be in Nashville, TN on January 26th to 30th to attend this yearly event that brings vendors and designers together. During the weekend, Haunted Hell, Nashville Nightmare and Slaughterhouse will all be toured. With that great lineup, I know the attendees will not be disappointed.

The next major public event for Nashville Nightmare will be the annual Valentine’s Day attraction. Can’t give you any details on that, but you know if it is coming from the minds behind the scenes there, it will be fantastic. I will definitely keep you up to speed on the latest changes and information for that event.

So now, I want to wish you all a Merry (belated) Christmas and a Happy New Year. Make a promise to yourself to visit your area haunted attractions in the year 2017. A lot of hard work goes into these events, and most of them only have a few nights to make back their investments. Help them out. Review them. And let me know which ones you think are the best! 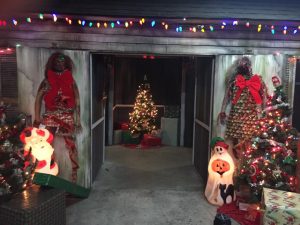