Lamb is Possibly the Best Bizarre Film, Ever

I have watched a ton of movies that many consider to be on the weird side of the aisle. Troma Entertainment would probably be the most famous production company for these kinds of films. But with those movies, you know what you are going to get from the start. You can’t see a movie title like The Toxic Avenger, Tromeo and Juliet or Class of Nuke ‘Em High and think, “I’m sure I am going to get some good, dramatic acting from these young and upcoming stars.” With that in mind, you go in with a predetermined mindset and are prepared for the weird.

A24 Films is a relatively new company on the scene, as it was founded in 2012. But in that short time, they have made a name for themselves among film fans. As a horror fan, I love most of their films that enter into this genre. Midsommar, while not exactly liked by most critics, is one of my all-time favorite horror films. Hereditary is also another dark horror film that has high praise from fans. And The Lighthouse has got to be one of the strangest films ever created. With A24’s plan to release at least one movie every month of the year, you still get some bombs, but very few and far between.

The Icelandic drama, Lamb, is one of the newest films in A24’s portfolio. Directed by Valdimar Jòhannsson and starring Noomi Rapace, Hilmir Snær Guónason and Björn Hlynur Haraldsson, Lamb is the strange tale of a family mourning the loss of a child. One day, María (Rapace) and her husband, Ingvar (Guónason), find that one of their sheep had given birth to a half-lamb, half-human hybrid. Feeling a parental attraction, María and Ingvar take the lamb in as their own child, naming it Ada in honor of their deceased child.

As time goes on, Ignvar’s brother, Pétur (Haraldsson), arrives on the farm. Shocked initially by what he sees, Pétur slowly begins taking more of a softer and loving approach to the lamb. However, the deep attachment María takes for the child causes her to take some drastic actions to protect Ada. And, even worse, another creature stalks the family with unknown motives. 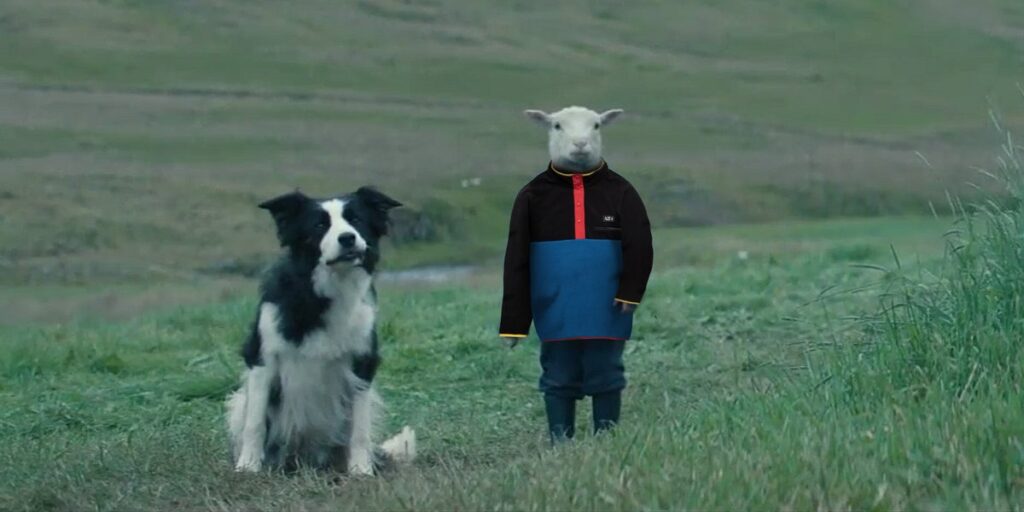 Honestly, I was kinda taken aback when I first saw Lamb. I had not read anything about it, nor had any knowledge about what it was. A friend of mine made a passing comment a couple weeks ago and said, “I can’t wait to hear your take on Lamb.” I assumed that meant it was going to be either really good or really bad. And I admit, I was kinda excited to check it out.

Lamb did not disappoint. The effects used to make Ada look like both a lamb and a small child were flawless. I kept pausing and looking for ways to determine when special effects were being used and when camera angles took precedence. I found it was really well done how they masked the two, blending them into a perfect mix.

As a parent, myself, I can relate to the parents, to a degree. While I have never had the trauma of losing a child (and pray every day I never experience that), I do understand that being presented with this bizarre newborn while grieving may cause a level of attachment that goes beyond what it should. With this trauma, I would probably do the same, placing the love I had for my kid onto this hybrid being. Especially with the child being in the form of a lamb, an animal normally viewed as peaceful, innocent and loving.

Lamb is a very odd film. There is not much of any background music. There is a feeling of dread upon the farm, with the entity stalking the family. Death is just around the corner and shows itself several times. Even with all of that, the movie feels like a heartfelt drama, showing the love María and Ingvar have for the baby lamb. The film feels like a hybrid itself: Not quite a horror film, but not fully a drama. It’s a beautiful blend.

Lamb earns a perfect five out of five stars. It’s a touching drama about nature restoring a family after a great loss. That restoration is not conventional by any stretch of the imagination. And as Lamb continues, it feels like nature, itself, is working against the family. Lamb is a dream wrapped in a nightmare, that plays out in reality.