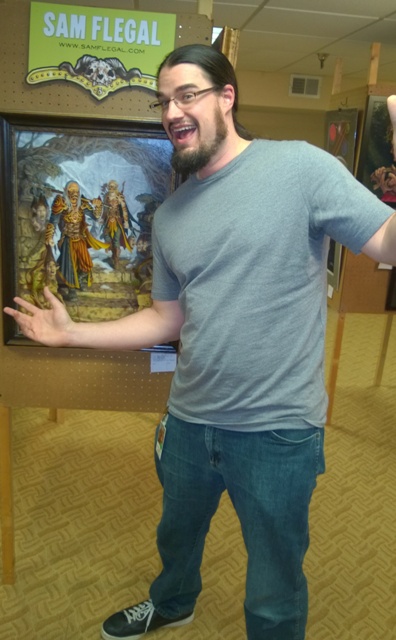 Per Matt
When it comes to Zombies and Norse mythology, Sam Flegal can weave an all-encompassing storyline into his artwork.

Illustrator Sam Flegal was the Artist Guest of Honor recently at Hypericon, Nashville’s premier speculative fiction convention. After attending his panels at different conventions throughout the years, I finally caught up with him to discuss his craft. Topics include Zombies, Geek Culture, Norse mythology and working in the game industry, as well as a preview to a couple of his upcoming projects.

When did you first realize you wanted to become an artist?
– “I guess I’ve always loved to draw. I started drawing when I was 3. I don’t remember it, but as the story goes, my parents tell me I was on an airplane and was being loud and annoying. So, my Dad drew Batman and taught me how to trace on top of his drawings. So, I guess my first real drawing was Batman and Robin. For a lot of years, I’d trace my Dad’s drawings. Then I’d look at his pictures and do my own drawings.”

What are some of your influences?
– “In terms of making it a career, my Mom is an editor and works in publishing. She exposed me to actual working artists, both graphic designers and illustrators. When it was time for school, I wanted to make the next Toy Story — which was very popular at the time. I went into school for computer animation. I took all the foundation courses and then took my first animation class at Mississippi State and hated it. Animation is a lot more like programming, than drawing. It just wasn’t for me. I got my degree in graphic design, worked in graphic design for seven or eight years and I learned I wasn’t happy with what I was doing. I wasn’t drawing any more. I was really into comics and Dungeons and Dragons and Magic: The Gathering as a kid, so I just started drawing again.”

How did you start creating Zombie portraits?
– “Eventually, I started making paintings and going to conventions, but the real turning point was at Hypericon — which is where we are at now — in 2009. I had a few prints and had a few pieces hanging in the art show. I set up a booth and I had a sign that said I’d draw you as a Zombie, for $20, I think. I sold one print and one drawing and did eight Zombie portraits. Maybe there’s something to this Zombie thing. People now know that The Walking Dead is amazing and popular. In 2009, it did not exist. It was right around the time Zombieland was about to come out. Zombies have been popular for so long, but not like they are right now.”

“I was told by an art friend if you want to work in gaming, then Gen Con is the convention to attend. I went to Gen Con and had a bigger sign. I raised the price slightly, so it was actually cheaper to get as a couple. I believe I did 82 Zombie portraits over four days. It was both amazing and crazy. I was staying up ’til 2 or 3 in the morning drawing, sleeping exactly six hours, getting up and drawing again. I was taking people’s pictures and drawing, based on the little picture from the digital camera. One of my friends took pity on me and let me borrow his laptop, over the weekend. That changed my life. At the end, it was kind of emotional for me. I really started to market the Zombie portrait thing and going to lots of conventions. Eventually, it built into such a business that I could afford to quit my day job. This was right around the time my wife and I had my daughter. I became a stay-at-home dad and on the weekends I did conventions. In between naps and feedings, I tried to draw as much as possible. Eventually, I went to a summer camp on art called the Illustration Master Class, where I learned about oil painting and technique. It really opened up my world.”

“For the last three or four years, I’ve been fully professional. I’m now working for game companies, I’m doing card art and all those things I had wanted to do, that had gotten me into art. It was the Zombie portraits that brought me back and turned me around. But now I’m at a point where the Zombie part of my business is dropping a lot and the commissions side is picking up.” 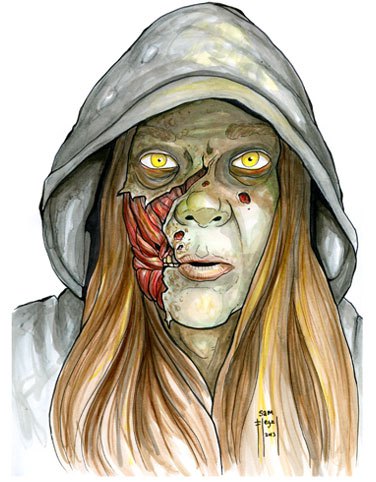 What were some of your Zombie influences?
– “I’ve always loved Night of the Living Dead. There’s just something about that first one. It’s my favorite and I don’t exactly know why. It’s such a depressing and epic film. It’s always colored things for me. Other than that, I really loved Tales From the Crypt when I was younger. The HBO series influenced me a lot.”

What’s your thoughts on the current state of Zombies in pop culture?
– “I think it has to do with Geek Culture. Geeks like to be fringe; Zombies are no longer fringe. So, geeks are moving away from Zombies, but the mainstream likes Zombies, now. I’m now doing Zombie portraits for grandmothers and children, people who you wouldn’t normally think were interested in Zombies. But at conventions, I’ve seen a pretty big shift of people that are kind of tired of it. I don’t know where geeks are moving onto… maybe Doctor Who…”

Tell me a little about your experience working in the game industry.
– “I worked on Legend of the Five Rings, which is a samurai combat card game. I’ve done work for Fantasy Flight, on their Warhammer card games: both Warhammer Fantasy and Warhammer 40k. I used to play 40k and Fantasy, so it’s super-fun to work on them. They have Zombies, so it all ties together. I do some work for role-playing games, as well. Now that I work on games, I play games less often.”

What kind of advice would you give to aspiring artists?
– “You really have to practice and focus on the craft, making art that you love. Don’t try to create art that you think people will want. Spend the time to learn what you’re doing. If you’re a good artist, you can do whatever you want.”

Have you seen any convention-goers cosplaying as any of your game-related characters?
– “No. Though I do occasionally photograph costumes for reference or inspiration, most often at Dragon Con. I attend Dragon Con because they have a great art show. I spend all my time at the art show booth, so I often only see the crazy costumes that walk past me, rather than the whole spectacle of the show.”

Will you be attending Dragon Con this year?
– “Yes. This year, I am doing three panels at Dragon Con: One of them is Making It As An Artist, another one is How To Begin Your Career As An Artist and the panel Anatomy of a Monster: How to Make the Unreal Look Real.”

Binding of Loki by Sam Flegal

You’ve created some great mythological art. How did you get involved with Norse mythology?
– “I love Norse mythology. It’s a big part of my work, right now. Donato Giancola is a mentor of mine and an artist I respect a great deal. He produced a book all about Middle Earth and The Lord of the Rings. He talked about how much he loved the mythology of that world and how he could never create enough pictures from those stories. I got to thinking… I love Norse mythology that same way.”

“It came about at a time when I had just finished a bunch of commissions and didn’t have anything to work on. It was the first time in about two years, when I had time to make a painting for myself. I choked. I suddenly felt I didn’t know what to do, as an artist. Why don’t I do something based on Norse mythology? I did the piece called Odin’s Secrets, which you can see on my Website. Now, it’s one my most popular paintings. I loved making it and researching it. If Donato can do 40 paintings and put a book together, I could do that with Norse mythology. Over the past several years, whenever I have a break in my schedule, I produce something related to Norse mythology. My hope is that over time, I’ll have a body of work that’s significant enough to make a book related to that in some way.”

What are some of your upcoming projects?
– “I’ve just started working on a piece for Hero Games. They actually finished a Kickstarter for Fantasy Hero Complete. If you’re not familiar with Hero Games, they’ve been around for a while. They do the Champions system and they’ve been making role-play games for at least a decade, maybe two. I’m doing the cover for Fantasy Hero Complete and a personal project I’m working on is a painting of Frigga The All-Mother, who is Odin’s wife and sort of the gatekeeper of Asgard, in a way.”

How many conventions do you normally attend each year?
– “There’s a point, at the height of it all, where I was almost doing 30 conventions in a year. Last year I did 18 and this year I’m doing 15. I’d like to stick around at 10 to 15 conventions a year. This weekend, I’m the Artist Guest of Honor at Hypericon. That’s starting to happen more, where I’m the guest at shows. Because I work in game art, I give a lot of panels on how to break into the art industry.”

What upcoming conventions will you be headed to next?
– “In the beginning of August, I’m going to be at FandomFest in Louisville, KY, then things get pretty crazy. I’m going to be at Gen Con, two weeks later I’ll be at Dragon Con and two weeks later I’ll be at IlluXCon. Those last three are three of the biggest-selling conventions of the year and they’re all within six weeks of each other.”