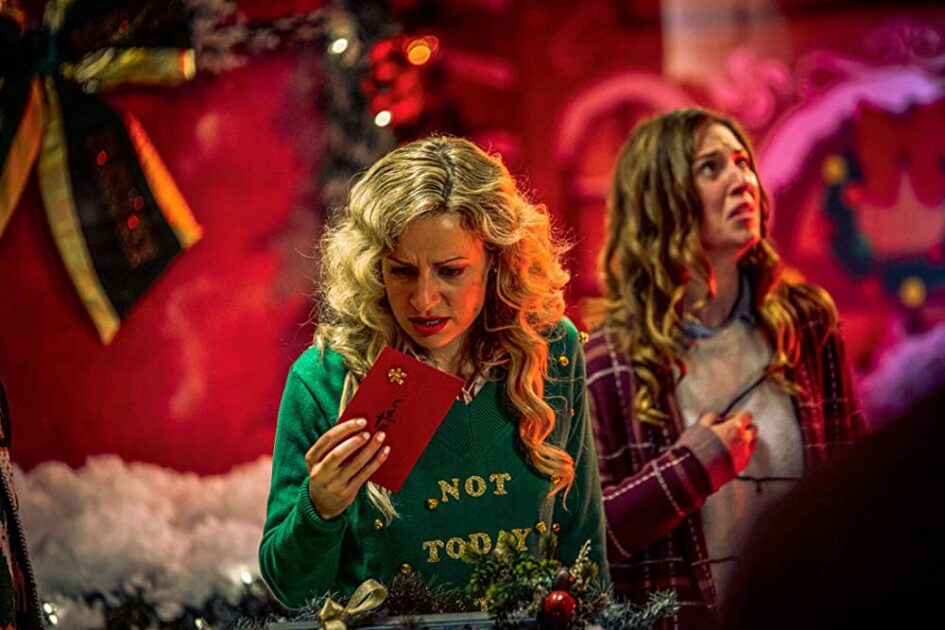 Per Matt
‘Tis the season for some holiday horror. And since Christmas 2020 has disappeared into the past only a handful of hours ago, it’s not too late to send your Letters to Satan Claus. My Guilty Pleasure celebrates the naughty and the nice from this horror comedy.

In the city of Ornaments, life revolves around the winter holiday, 365 days a year. It’s where vaping teen scamps are the biggest problem for the local police department. So, when a little girl accidentally misspells the destination for her Christmas wish list, she gets much more than she bargained for. Years later, Holly Winters has become quite frosty. Up for a major promotion to take over the co-anchor position at her news station, she first has to appear relatable to viewers. And in attending the week-long festival in her hometown, she must face the (literal) demons of her past.

I mean, what’s a small typo among old friends… and enemies?

“Vodka is the only thing getting me through this week.”

Growing up in a small town, I took offense at Ornaments’ portrayal. I cannot stand stereotypes and this one felt just like every other story interpreted by Hollywood. It almost felt like each character was a carbon copy of Dana Carvey’s The Church Lady, from Saturday Night Live. It was super saccharine sweet… sickly so. Sad to say the random murders actually kept my attention, which was sorta nice (in a way).

Plot holes or gaps of logic? There’s plenty. Despite a character playing a guitar while wearing winter decorative mittens during the grand finale, the “performed” music turns from acoustic to electric, and back, without the gloves ever coming off. And as the characters realize the only way to defeat the devil is by keeping the Christmas spirit alive while many needlessly die, I feel like the plot device was stolen from Ghostbusters 2, among other movies.

There’s some dark humor mixed in with the sickly sweet, and in the blink-and-you’ll-miss-it addition of social awareness, two well-known characters appear here with non-binary portrayals. Honestly, I barely noticed it until being reminded by the movie’s IMDb site. That’s just bad writing, whether it’s a last-minute addition to the script or a subtle insert of politics into a holiday film. Not really my cup of tea.

Letters to Satan Claus wasn’t a total waste of time. Viewers could really enjoy it by drinking every time you rolled your eyes at particular plot devices. And paired with Toys of Terror, Syfy has thankfully released two new holiday-based films this month. Both naughty and nice, Letters to Satan Claus offered a decent storyline that kept me amused, ever so briefly, while experiencing some holiday doldrums.