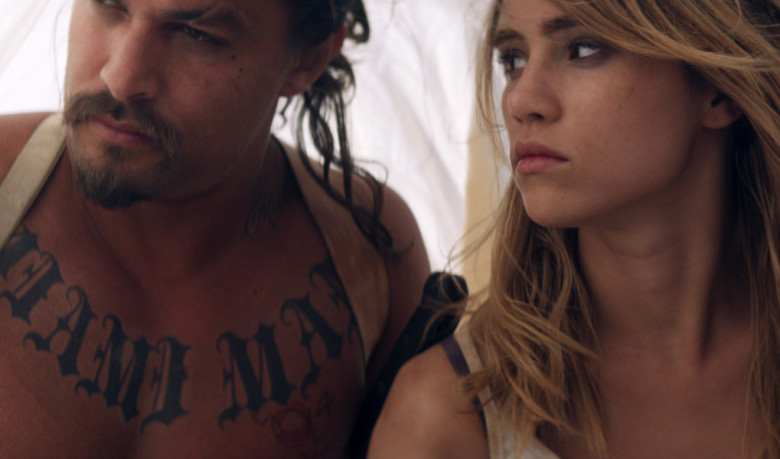 Watching The Bad Batch, I wondered to myself, “Someone funded this film who must have been friends with Jim Carrey, Jason Momoa, Keanu Reeves and Giovanni Ribisi. They must have gone up to the guys and said something like, “Hey, did you guys like Escape from L.A. or Death Race 2000? If so, boy, do I have a film for you.” I can’t imagine another reason why these box-office stars would all agree to this little art film, but I’m glad they did. This isn’t a film everyone will appreciate. It’s a visually interesting narrative about bad people doing bad things. If you are looking for some kind of meaning, I don’t think It’s waiting for you in The Bad Batch.

In the film, Suki Waterhouse stars as Arlen, who has done something to get her cut off from the rest of society. She is disposed somewhere in a gated part of the desert and is fairly quickly attacked by cannibals. They saw off an arm and a leg before she is able to escape. She is saved by mute scavenger played by Jim Carrey. I had no idea that was Carrey, only figuring it out because the old man had such perfect abs. I remember thinking, “When is he working out? This old man, in a dystopian world, is hitting the gym more than me, OK then.” It was literally that one aspect that gave the character away. He takes her to Comfort, which I have to assume is the only city. I’m not really sure. There, its citizens patch her up and she falls into a somewhat comfortable life.

Jason Momoa plays Miami Man, who is the leader of the cannibals, I think? Arlen crushes on him pretty hard because, you know… have you seen Jason Momoa? I mean, sure, cannibalism is evil and all, but I think it’s something a girl can look past when the man in question looks like the king of the Dothraki. However, less forgivable was the cringe-worthy Cuban accent that came out of his mouth, every time he spoke. I also wondered about his gym schedule, what with being a nomadic outsider living in a wasteland. I mean, one would think that would take up most of his time, but I digress. Keanu Reeves is also in this one as the leader of Comfort. His character is sort of like a drug-dealing, tomato-loving Hugh Hefner type, who doesn’t actually seem that bad compared to, say, cannibalistic nomads.

The film has a ’70s exploitation-style vibe to it. It’s a grindhouse cult flick from an up-and-coming director with a visual storytelling style who is begging for a mega budget that will indulge her wild ideas. The Bad Batch is all at once an odd, gruesome, beautiful and stays with you long after you see have seen the film. VICE Creative Director Eddy Moretti, who is an executive producer on this film, dubbed Director Ana Lily Amirpour “the next Tarantino,” and I agree.

The problem with The Bad Batch is it’s a tad short on story. Why is Arlen there? How exactly does the system work? How does one get a job and a place to live in Comfort? If you can overlook all of that, it’s a fun film to watch. The film was carefully designed. Amirpour put a lot of love into creating the wold Arlen is dumped into. It’s expansive and claustrophobic, all at the same time. The early ’90s soundtrack and rave scenes give the film a definite feel as if this story happened years ago, in another reality. Is there plenty of over-the-top symbolism in the movie? Yes, it’s there, but it’s also not to be taken too seriously. Pretentious people will waste time trying to find some kind of symbolic meaning in the film, but horror and cult movie fans will enjoy the film for what it is… fun to watch. If there is a point to this movie, it’s that there are no clear-cut good guys in this film. Trying to relate to their actions isn’t supposed to be easy or make much sense. After all, they are The Bad Batch.

I give The Bad Batch three stars for dystopian world building and Jason Momoa. That’s right, just Jason Momoa. His mere presence is worth at least an extra star. The Bad Bath is a psychedelic neo-Western that exploitation and cult film fans will eat up. The Bad Batch is currently streaming on Netflix.