A Look Back at Season 1 of Daredevil 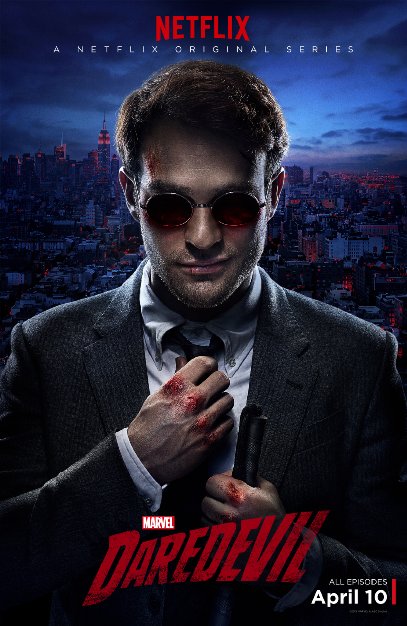 The Marvel Cinematic Universe has seen limitless bounds. Captain America became the first hero to convert from comic book pages to the big screen back in 1944, and since Blade came along in 1998, a superhero trend has escalated in the movie industry to become its own genre. Now, 13 years after the big-screen introduction of Daredevil; near the start of an influx of annual Marvel productions, Matt Murdock’s alter ego is the first to get his own series. In the summer of 2015, Netflix launched its first of four Marvel TV shows, starting with the hero from Hell’s Kitchen. The move to produce Daredevil on the small screen isn’t much of a surprise, since the 2003 Ben Affleck, Jennifer Garner flick was widely considered a flop (rated only a 5.3 on IMDB.com) and other heroes like the Fantastic Four and Spider-Man have gotten quick reboots in just the past few years.

There are several reasons why Daredevil works well as a series, rather than another summer blockbuster. For starters, we get a vivid and complex understanding of multiple characters’ motivations and backstories. Anyone familiar with the Daredevil story knows that Matt Murdoch is as close to an altruist as any of his Marvel counterparts. The very accident that causes his blindness was the same in which he saved a man from being killed by a truck carrying barrels of hazardous chemicals. There are many flashbacks and present-day events that show how Matt’s morals are shaped in such a rough neighborhood. Matt’s relationship with his dad is one of the aspects of his character that can be admired. Though Jack Murdoch, a professional boxer, has many flaws, he does what he believes is right for his son and strives to make him a better person. Taking dives in boxing matches to rig bets for the mob isn’t noble by anyone’s standards, yet it means that he can have the money to care for his son, when his only earnings as a fighter are meager, at best. When Matt tells him after a loss that his opponent was a bum, Jack quickly responds, “Hey, anybody’s got the guts to step into that ring deserves respect. Don’t you ever forget that,” which is both a lesson that everybody is trying to make something of themselves and that nothing comes easy, especially in a fight. Matt and his father have to lean on each other for support, something that works well if the script has an hour to delve into it properly.

This perk also works well by evolving foes and making them less one-dimensional. The Marvel villains almost always get underdeveloped origin stories on the silver screen. Because Daredevil has one of the largest number of adversaries of the Marvel Universe, villains often work together to a similar and well-defined end. Having “The Hand,” an entire faction of deadly ninjas, contribute to a movie plot without whitewashing them would be near impossible. Though they aren’t mentioned by name, the seeds are planted for any Daredevil comic fan to see and will surely play a bigger role in upcoming seasons. The focus truly is on Kingpin, though. Vincent D’Onofrio’s portrayal of Daredevil’s archenemy is glorious. For a man without superpowers, Kingpin is more entertaining and intimidating than almost any Marvel foe has been portrayed in the past 15 years. Viewers also feel sympathy for the man only referred to by his proper name: Wilson Fisk. Just like Matt, he grew up in a violent part of town, had a troubled childhood, and wants to better his city. Unlike Matt, his idea of bettering his city is to rid it of low-level crime and control all illegal operations in Hell’s Kitchen, disguising his motives as a sort of gentrification. The complexity of Wilson Fisk’s character represents everything that is great about Daredevil. He has loving relationships with multiple characters and yet he will personally kill anyone who looks to get between him and his goals.

Another reason Daredevil works on Netflix is because it is gritty, darker and more realistic than the majority of Marvel’s adaptations. Daredevil isn’t a comic hero who fights with laser beams or fireballs. He wins his fights with his bare hands and an excessive training in martial arts. This very much isn’t a show that you watch with your children. You could watch the entirety of the Spider-Man and the X-Men films and see bloodshed maybe a couple of times. The toll that Daredevil takes throughout the season is daunting and almost goes beyond the realm of practicality for someone to survive. It’s a surprise that he doesn’t have his protective suit for the majority of the episodes. The themes also go beyond just having to save the day from formidable enemies. Drug and human trafficking, along with plenty of gruesome deaths puts Daredevil’s story into a more real and higher-stakes game than the movie ever did.

Perhaps the best purpose Daredevil suits television is that both sides of his persona have equal parts of screen time. Matt Murdock, the lawyer, is just as interesting as Daredevil, the hero, and just as important to the story. It took three movies to fully appreciate both Batman and Bruce Wayne, and those six hours still couldn’t equate to the 10 that Matt and Daredevil get in just one season. Working with his friends Foggy Nelson and Karen Page at Nelson and Murdock just goes to show how invested Matt is in true justice. Through the status quo, he realizes that getting things done in a place as corrupt as Hell’s Kitchen requires equal parts litigation and ass kicking. The inner turmoil is present in Matt, who, through the help of Catholic Priest Father Lantom, weighs his doubts with having to hurt enemies to change things. The real story isn’t about the masked hero, but about the struggle the man under the mask faces, because things are too bleak to be solved the righteous way.

Daredevil is one of the highlights that 2015 had to offer for new TV series. It bodes well that Netflix started with a recognizable and successful hero to launch their Marvel shows that will ultimately come together as The Defenders. As for next season, set to stream in late March, Jon Bernthal will be introduced as The Punisher, which is sure to divide and excite fans of the comics and the show. One thing is assured: Daredevil delivers an experience that has outshone some of its best big-screen predecessors.