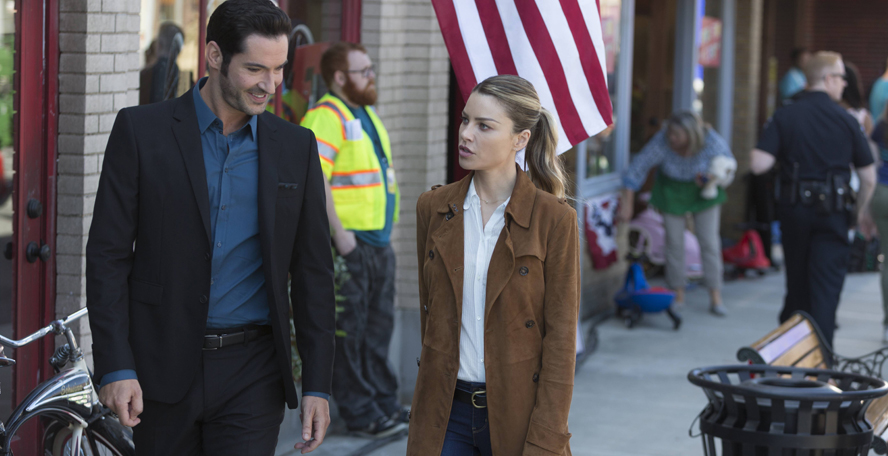 No TV show surprised me more last season than Lucifer. Loosely (very loosely) based on the DC comics character, Lucifer follows Lucifer Morningstar, the devil himself, as he lives a life of luxury in LA. No longer content to be the jailer of hell, Lucifer packed his bags one day and went on sabbatical.

The comic series, Lucifer, crosses paths with other DC comics characters, including Neil Gaiman’s Sandman. Lucifer, the television series, follows Lucifer as he solves crimes with a plucky police detective. That’s right. They turned the devil into Richard Castle. Or Jessica Fletcher. Or whatever murder of the week procedural character you want him to be.

And surprisingly enough, it kind of worked. This is no small part to the performance of Tom Ellis, who is obviously having the time of his life as Satan. The rest of the cast was the perfunctory procedural crew. The partner / love-interest. The partner’s ex. The psychiatrist. The plucky sidekick. It was harmless TV popcorn, elevated by a great lead and the occasional guest star.

Then somewhere, about halfway through the first season, this began to change. A mythology was being built. Why does Lucifer lose his invulnerability when he is around Detective Chloe Decker (Lauren German), his partner? What is happening to hell in Lucifer’s absence? What happened during the police corruption shootout Decker was involved in?

The procedural bits stuck around, but the show would flare to life when these bits and pieces were being teased. It was occasionally bogged down by Decker’s refusal to believe that Lucifer was in fact the devil (Agent Scully Syndrome). But, the season finale seemed to pay it all off, and set-up a big mystery for Season 2. Who is Lucifer’s mother and how did she escape hell?

Unfortunately, Season 2 hit the ground with a bit of a thud. After a cold open where Lucifer and his angelic brother Amenadiel (D.B. Woodside) foil a diamond robbery thinking that their mother has inhabited the jewel thief, we are thrust right back into a by-the-numbers plot straight out of Law & Order or CSI.

The series is always at its best when Lucifer confronts his issues head on, with little to no regard for those around him. His obliviousness to the wants and needs of others and incredible self-absorbancy can be staggering and great fun to watch. However, when that self-focus is on a mystery that the audience is already one step ahead of him on, it gets tedious to watch. We know that his mother won’t be any of these one-off bit players, so watching him focus so hard on it came close to grinding the episode to a halt. Fortunately, it led to one amusing sequence where a Hilary Duff-type teen star starts tearing off her clothes in front of an appalled Lucifer.

Unfortunately, the showrunners also felt the need to restore the status quo, absolving Decker’s ex (Detective Douche, as per Lucifer) of his involvement in at least two officer-involved deaths with nothing more than a throwaway line. This was a character whose arc should have ended in the Season 1 finale, only to return occasionally, not as member of the team.

Also reset was the insufferable, willful disbelief of Detective Decker, regarding the true identity of Lucifer. He has told her literally every episode who he is, and occasionally let lose some surprising displays of manipulation and power. Lucifer spends most of the episode begging her to test his blood, so that she will believe him. This is all ground to a halt by Amenadiel, in a ridiculous scene involving a bulletproof vest and blood packs. I honestly wanted to storm out of the room. This was a sticking point for me in the second half of Season 1, and looks like it will continue to be so.

That’s not say that the premiere didn’t have its moments. We are treated to some interesting moments where it looks like Amenadiel may be losing some of his divinity (his power is slowing down / freezing time, and he loses control at least twice), but more importantly, the last scene of the episode finally, FINALLY, introduces us to Lucifer’s mother, played by Battlestar Galactica’s Tricia Helfer. And in a particular moment of brilliance, Lucifer is performing a cover of All Along the Watchtower, which has a little extra meaning for the BSG fans out there.

The Season 2 premiere played it way too safe. And, I know why. Lucifer was a mid-season replacement. This is its first chance to play with the big boys on network TV. They have to draw in an audience, which means casting a wide net. Probably hoping to catch some of those Castle fans that are looking for a police series that has a sense of fun. Unfortunately, this may not be the episode to do that. A lot of the spark that fueled Season 1 felt like it was missing. Lucifer never really got to let lose and be as cocky and suave as he normally is.

Where the Pilot episode fell into generic plotting, it made up for it with wit and charm. This season opener felt like it had half the charm and maybe a quarter of the wit. Rather than letting Lucifer drive the story along, it felt like he was playing catch up. Hopefully, with his mother back in the picture, things will turn around.