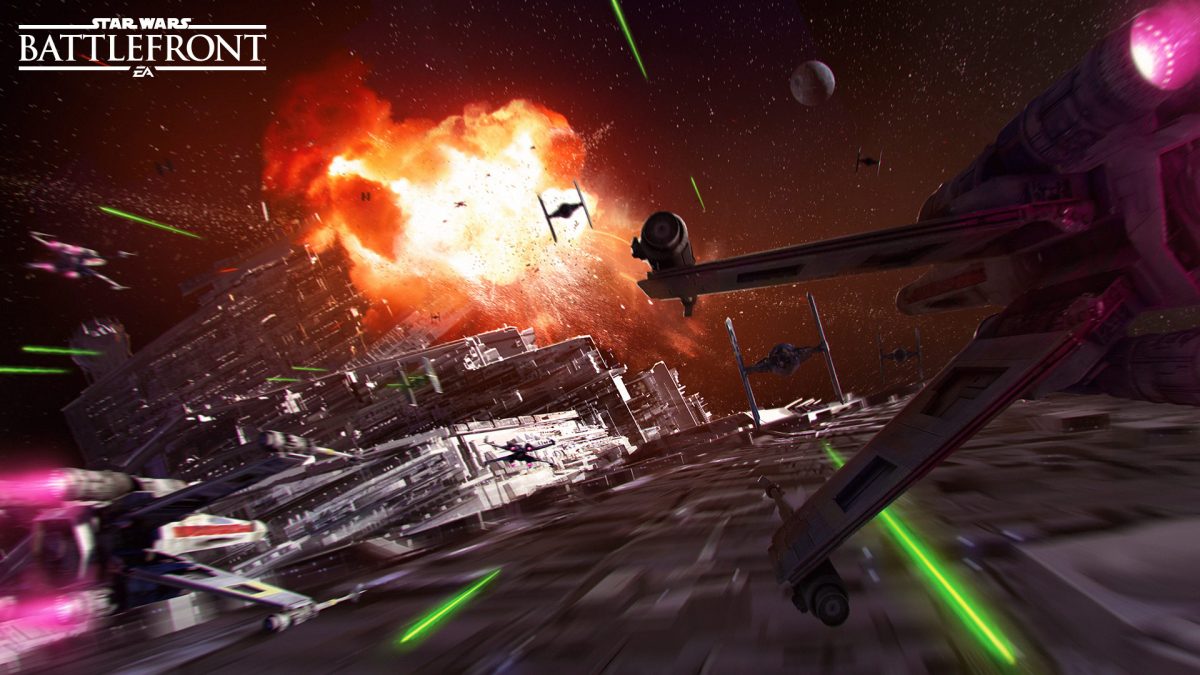 Witness the firepower of my armed and operational cliché title.

Probably the most anticipated (and considerably large in file size) DLC in the Star Wars: Battlefront lineup has been released to season pass holders, and despite having the fewest game modes, it has brought more exciting additions to the game than any prior release. It’s a safe bet that every adult playing this game is in touch with their inner 9-year-old better than ever while playing, and those of us who have actual 9-year-olds can attest to the accuracy of their enthusiasm. We’ve all been waiting for the chance to play this game in the most iconic setting of the franchise — and now we can!

Now, before we blow smoke up Electronic Arts’ typically mediocre ass on this one, let’s handle the gripes. There are no how-to’s involved in the new items, vehicles, sounds, indicators, etc. Sure, some of it is evident, but many things are heat-of-the-action discoveries and never truly set in until you observe someone else playing. Additionally, there seems to be a laziness (which EA is known for) in the lack of application of the DLC expansions to other gameplay. You join either regular games which don’t feature these new worlds, or you join in each expansion’s game-mode roulette. The battle modes have gone untouched for the most part since the game’s release, and the new and praise-worthy skirmish mode is not seeing any growth this round, either. One would hope this is part of a grand plan of future expansion and enhancement in 2017, but one cannot help but assume this is just more of EA’s legendary myopia.

In addition to these shortcomings, there is an imbalance in this expansion, in that the new and very-cool battlestation mode seems to only reward the success of the Rebels, and players proceed through the mode’s three settings: a fighter squadron assault on a Star Destroyer, a hostage-rescue battle inside the Death Star, and the infamous trench run finale made famous in the film. If you play Rebels (still an annoying coin-flip when joining) you get rewarded with advancement through each of these stages. If you’re Empire, you get… nothing. Jack shit. You get to… switch modes and play some other mode! Yay!

This seems clunky, poorly thought through and unexciting in many ways. After playing for several hours, I was never lucky enough to be part of a team who made it all the way to the fun part. In fact, to be honest, if the fate of the galaxy were left up to some of the people I was matched up with as teammates last night, Vader would have experienced a cakewalk.

My child, however, lucked out — even delivered the final explosive blow to the spherical battlestation. It was fun. It was exciting. It exploded in spectacular New Hope Special-Edition fashion.

This is where the praise lies. Battlefront, overall, has been fun and successful, despite its myriad of bone-headed drawbacks. That reality is very much in play with this DLC. Finally, you can battle in space, zooming around with your X-Wing, weaving in and out of debris, taking pot-shots at the Star Destroyer, and exclaiming, “I can’t shake him!” right before you blow up. Finally, you can trot down the catwalks and corridors of the Death Star and clear a room of Stormtroopers, proclaiming that the situation is once again normal — or trudge through the garbage compactor and squeal your best, “Threepio!” in Luke-radio-squawk. Finally, you can utter, “I have you now…” while attempting to zig and zag around the trenches.

The settings are beautiful, the immersion is legit, and the spirit of Star Wars is very much alive in this game, especially with this DLC. Battlefront is now, officially… SO. MUCH. FUN.

Finally, this game has completed its delivery of our childhood dreams and the augmentation of the childhoods of our younglings. Finally, Star Wars: Battlefront is the complete game we’ve been waiting for, even if it’s still got a few wrinkles still to be ironed out of its Jedi robes.