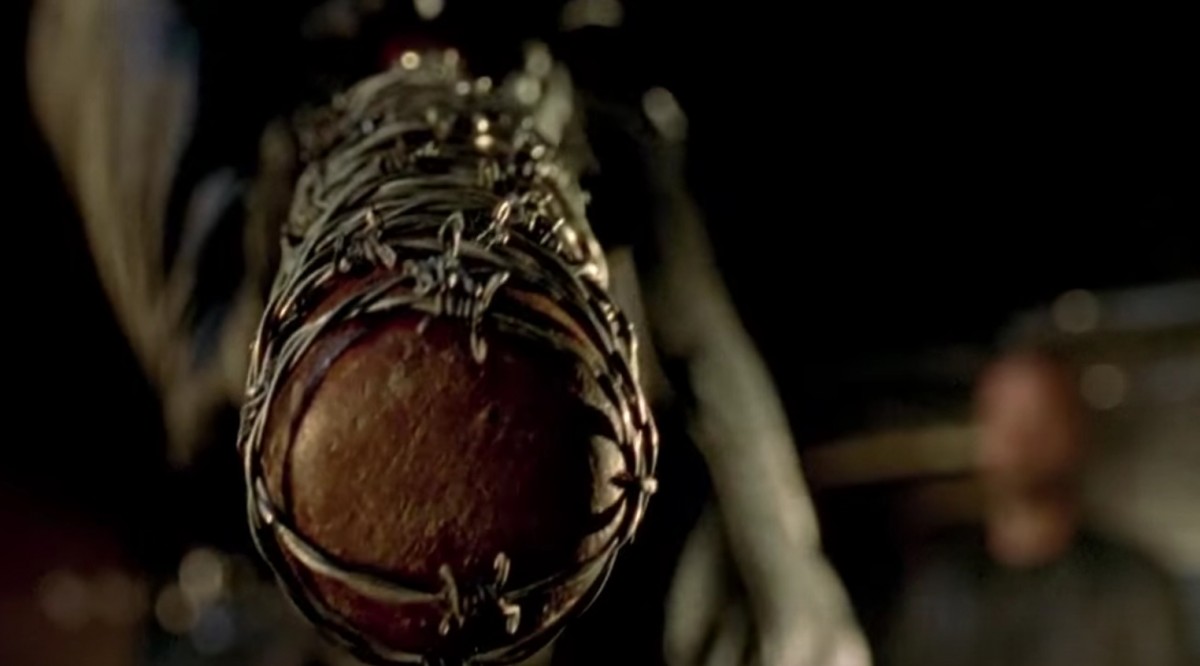 OK. It happened. Negan has made his entrance, and with him, Lucille the “vampire bat.”

In the highly anticipated Season 6 finale of The Walking Dead, we journeyed through a bit of a slow-walk story for an hour and fifteen minutes or so, and then vast acceleration into the bloody inevitability of barbed wire. Closing in a first-person fade to black, similar to what we called right here on ZIMB at the beginning of the show, we’re now left with a summer of speculation. One might even call this the Summer of Spoilers, as it is impossible to discuss this arc without discussing the comic’s canon.

Unless you have amazing earplugs and no Internet access, that canon is the cold, hard fact that Glenn is the victim of Lucille. But this conclusion is not concrete, with a vast many characters present who were either not in the scene (or already dead) in the pages of the show’s pictographic counterpart. So, where are we going from here? It could be argued that anything off-canon in this case would seem cheap and somewhat of a betrayal of a major moment in the story. But then again, the non-comic fan-worshipped jewel of Daryl is in the mix, and there might be no bolder choice in television history than to dash the brains of the grungy heartthrob like so many hot-flash-inducing fan fantasies.

The best part of this situation is the likelihood that even the showrunners and writers are likely not yet decided on the outcome. What better place to be than in observation of the fan buzz while you reach a final decision on the route your story should take? Not since “who shot JR” have there been better puppet strings attached to the audience of a massively successful show.

As far as the rest of the episode is concerned, nothing was terribly remarkable. The road-closure gimmick seemed to get very old, very fast, and the plot was a drag for the most part. Perhaps our knowledge of where things were likely to head created too much anticipation to allow an adequate enjoyment of the buildup, but for most folks, the majority of the finale was just a death march, tempting the DVR-watchers toward their skip buttons.

That last 10 minutes; however, almost makes us forget how and why we ended up face-to-face with Negan — we were just so glad to be there. The fallout, mostly visible through social media, has been the glorious suspension of the story, as well. Almost an afterparty of Internet people-watching.

October is not that far away. It seems like an excruciating wait, but this summer will blow by and we will soon journey back into the world of Rick and his crew, to see where things end up. (And by “things,” we mean various teeth, hair, brains and at least one eyeball…)

If the comics are an indicator, we’re about to enter an era of new factions, eccentric leaders, a badass tiger, the second coming of Jesus, gut-wrenching choices of justice and revenge and then some. Season 7 promises to be phenomenal, if written and played well.