Wrapping up Season 6 of The Walking Dead 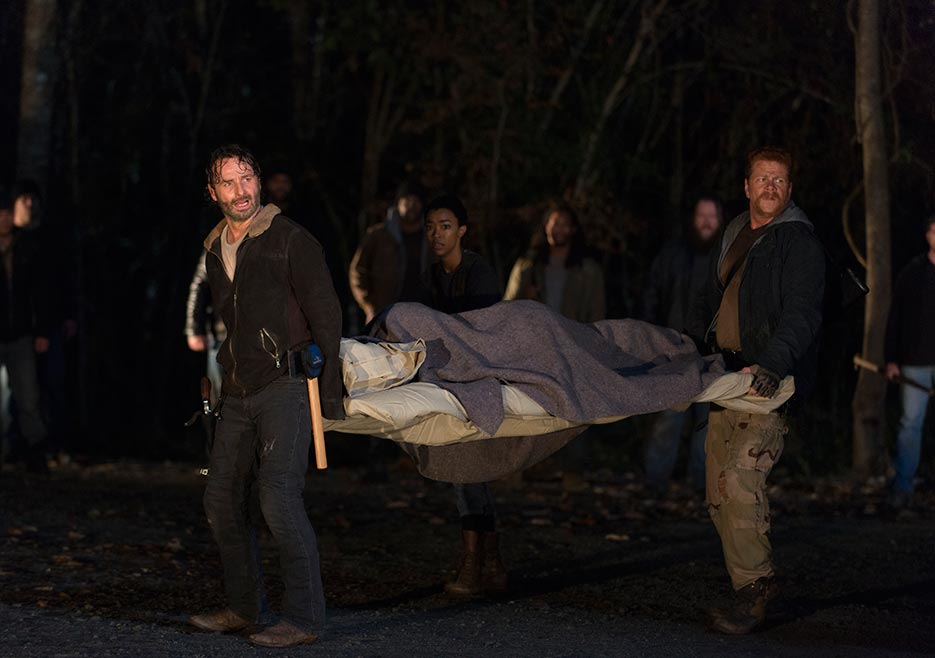 Can we finally exhale, already? After watching the season finale of The Walking Dead, the adrenaline is still flowing!

As Season 6 wraps up, we’re now eagerly anticipating what will happen next to Rick’s Gang. But before we get too far ahead of ourselves, let’s take a look back at what has led up to this moment.

The Next World
Let’s do the time-warp, again! Two months after the previous episode, there’s romance (Rick + Michonne = Richonne), (Tara and Dr. Denise) and a bromance (Daryl and Rick) brewing. Carl’s injury seems to be healing up nicely and unofficially, this episode will forever be known as “Apocalypse and Chill.”

On a supply run, the guys run into Jesus (aka Paul Rovia), who steals their truck and supplies. Michonne joins up with Spencer, while Carl and Enid also enjoy a stroll in the woods. Deanna’s demons are put to bed and the word “family” gets tossed around a whole lot in this episode. Has Rick’s Gang finally become one large, unified group? Only time will tell.

Knots Untie
Rosita actually makes an appearance in the Cold Open, but only to prove that she’s still with Abraham (who’s longing for Sasha). Maggie’s busy at work gardening and Glenn utters his death sentence, “We’re gonna be all right,” and you know what that usually means… Jesus has a sit-down with Rick’s Gang and reveals his settlement has already been trading goods with others.

“Confrontation’s never been something we’ve had trouble with.”

The crew rescues Harlan (a former obstetrician), Freddie and another survivor. Returning to their homefront (The Hilltop Colony), Gregory, their leader, is a bit of a neat freak. After cleaning up, he turns down a bartering deal, while trying to bust a move on Maggie. Rick and the rest stop an attack and The Saviors get a backstory. Then, Rick’s Gang makes a deal that Gregory can’t refuse.

“It’s gonna cost us something.” — The foreshadowing of Glenn’s death.

Not Tomorrow Yet
Back in Alexandria, Rick talks truth to his crew (in probably the first time, ever, all characters have been assembled together), but Morgan objects. Carol is looking for love in all the wrong places, Abraham breaks up with Rosita and battle plans are drawn to fight The Saviors. Things inevitably always get fouled up, but the Hilltop prisoner is released. An early morning gunfight ensues, Glenn and Father Gabriel kill their first non-walkers, Heath leaves the group and Morgan gets crafty, while Carol and Maggie get captured.

The Same Boat
Paula seems to be in charge of this group of Saviors. After getting taken hostage, Carol turns into a helpless victim until she breaks Maggie free (Is her full name really Magnolia?). The entire episode basically explores Carol’s true identity. So, Maggie and Carol are tough. We already knew this. Is Carol really breaking bad? There wasn’t much new revealed in this episode, except everybody calls themselves Negan…

Twice As Far
Now that Rick’s Gang has fully reassembled, this episode feels (and looks) a lot like Groundhog Day. The extra-special touches by the camera operator don’t necessarily help, it only accentuates annoyance. Rosita has moved on quickly, now that Abraham is out of the picture, although she seems more annoyed than in love with Spencer. On a scavenging trip with Denise and Daryl, she blazes her own path. With change, Eugene no longer has a mullet and requires protection by Abraham, which is why he’s promptly taken hostage. Dr. Denise takes an arrow through her eye and Dwight makes a return. After getting a mouthful of D, a gunfight ensues and the bad guys get away. Sasha makes her choice; so does Carol.

East
This is the relationship episode. Johnny Cash depicts Carol’s story in three words: It’s all over. But while the song plays, each of Alexandria’s couples are shown (along with a previous one), so maybe there’s going to be more than one of them breaking up. Daryl’s got cabin fever, Rosita joins a group to find him, while Morgan and Rick search for Carol, who’s more than capable of defending herself. Enid’s still in Alexandria? Funny how some characters disappear entirely into the background.

Catching up with Daryl, the group splits up, so, of course the good guys get caught. Morgan may have made up his mind to abandon Alexandria, Rick returns home alone, Maggie gets a haircut to match her comic book character (and possibly has a miscarriage), while a cliffhanger hints that Daryl gets shot… will his fans riot?

This may have been the most productive (and most exciting) half season, so far. There were far fewer lulls in the storyline, the writers were more creative and in a rare moment of clarity, we applaud Scott M. Gimple’s leadership. For the second time, Carol’s gone. Morgan, once again, is paired up with a domesticated animal. And every time Aaron enters a scene, I imagine an older, taller Topher Grace. Jeffrey Dean Morgan is the perfect embodiment of Negan. We cannot say enough good things about the actor (who may just be the best one on the show, so far). Great scripts by the writer’s room have him playing head games with Rick, which is enjoyable (but excruciating) to watch onscreen, but what kind of relationship — if any — do The Wolves have with The Saviors?

Without having read the graphic novels, we could tell Glenn was slowly getting written out of the show for the past few years, now. So, we called it, but it’s still a guessing game if the TV version will follow along with the comics, but our guess is Mr. Rhee will soon be a bloody mess. Point taken, Mr. Negan. Season 7 can’t arrive soon enough to prove us right. Is it October, yet?