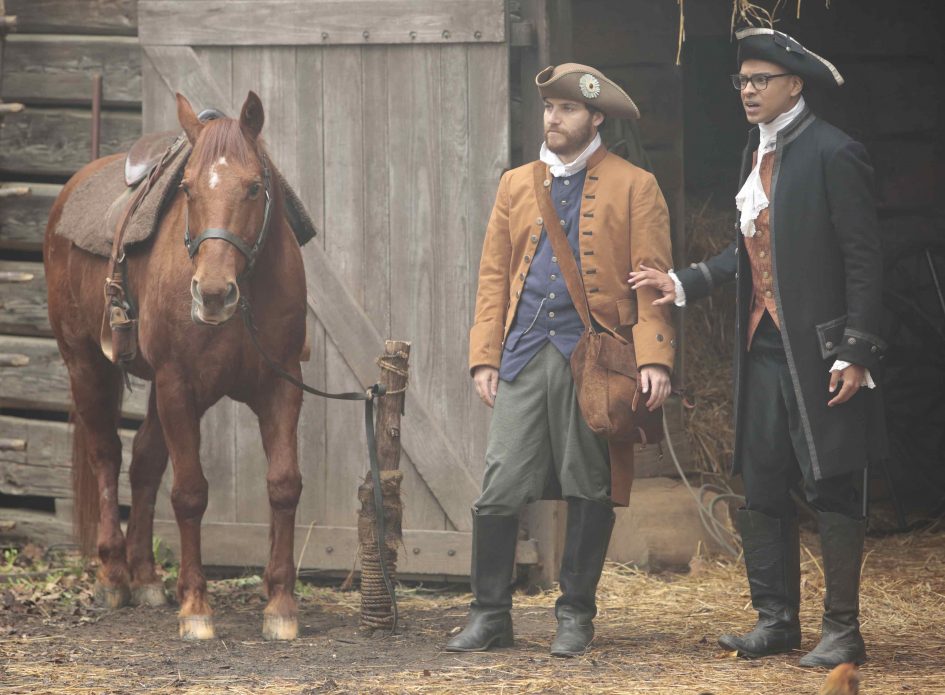 Making History is one of at least four new time-travel series to hit the airwaves this season, and the only one that is intentionally trying to be funny (I’m looking at you, Time After Time marketing campaign). Unfortunately, Making History is not as engaging or clever as one would hope.

The premise, itself, is actually pretty good. Dan (Josh Pally) spends his weekends hanging out with his girlfriend (Leighton Meester)… in 1775. And when he discovers that his weekend excursions may be altering the past, he recruits history professor Chris (Yassir Lester) to go back in time with him to kickstart the American Revolution. There is loads of potential here. This is the type of high-concept comedy that FOX throws out every now and then, with an occasional winner (The Last Man on Earth). It is too bad that the show reverts back to the same two jokes over and over again.

First, Dan likes to dazzle the people of 1775 with pop-culture references. He serenades his girlfriend, Deborah, with “My Heart Will Go On” and convinces Chris to yell “Show me the money!” to a bar full of belligerent founding fathers.

Second, the colonials only seem too aware that their living situation isn’t quite as comfortable as it is in 2016. Jokes about dysentery and the lack of women’s rights are abound.

However, just because the season premiere repeats the two types of jokes over and over doesn’t mean that some of them aren’t funny. Dan always takes a whole ham back with him on his trips, because it is easy to trade and everyone wants some, which makes for a hilarious ham peace offering later in the episode. Meester’s delivery also saves what could have been a thankless role. But other instances, such as the aforementioned “Show me the money!” sequence, fall flat.

The performances are a bit of a mixed bag. Pally is usually quite likable, but seems to be lacking that here. Leighton Meester steals the show as Deborah and Yassir Lester’s Chris is a fine straight man. I feel like there was a fair amount of characterization that was left on the cutting room floor in order to get this pilot down to a broadcast-friendly 21 minutes, and the overall pacing and character motivations suffer for it.

Eventually, it is revealed that Deborah is the daughter of Paul Revere and Dan’s courtship has distracted Paul so much that he neglected to take his famous midnight ride. Dan takes Deborah back to the future (I’m hilarious) with him and Chris stays behind to fight for American Independence, only for Dan and Deborah to find a memorial to him in 2016, very soon after they left (also very reminiscent of Back to the Future). That cliffhanger propels what I imagine will be the overarching story of the show.

Even with the pacing issues and uneven jokes, the premise and overall story could be enough to keep an audience interested, even though I would have much preferred just watching these two guys try to fit into 1775, with no serialized plot.