Feud: Bette and Joan — Let’s Get Ready to Rumble 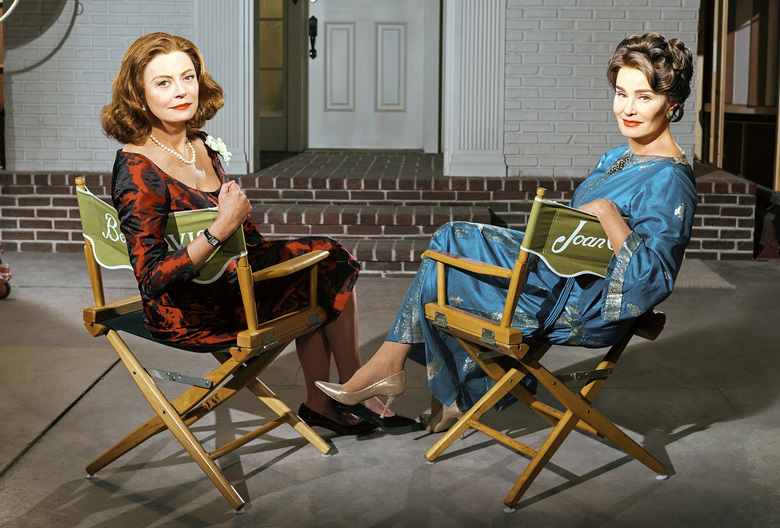 Maybe you aren’t a pop-culture historian and didn’t really know, but Joan Crawford and Bette Davis were archrivals for over 50 years. In case you aren’t in the know, I’ll give you a quick rundown as to why, because Feud focuses only on the circumstances surrounding What Ever Happened to Baby Jane?

It all started in the ’30s about a man, obviously, Franchot Tone. Crawford ended up getting the guy and the two were eventually married. Bette wasn’t exactly happy about that. The pair also fought over film roles, with Crawford normally getting first pick at the very best parts. However, Bette eventually won an Oscar over a role Crawford had turned down. Many people will say it was the Hollywood system that pitted these two against each other, but perhaps they were just… jerks. This isn’t exactly a story focused on two victims, and I somehow doubt the ladies involved would want you to think they were. Feud focuses on Bette and Joan late in their careers, as fading stars in their 50s, intentionally playing on their rivalry in order to, at least one last time, make a great movie.

Director Ryan Murphy is at it again, telling us a non-horror story about the making of a gothic thriller, that at its core is actually just a tad horrifying. This should come as no surprise to fans of Murphy’s American Horror Story. What a great idea Feud is for the sensationalist time we live in. In today’s world, the two stars would be given reality shows where we could watch the vipers dash it out on a weekly basis, but in the ’60s, it was simply whispers in the gossip columns. Feud, like all of Murphy’s work, is beautiful to look at and fun to watch. The problem is the feature tries to both blame the actress’ actions on sexism and ageism, yet continually shows the two actresses acting like children. Quite frankly, the idea that everyone was to blame but the two ladies involved doesn’t quite add up. Nevertheless, the show is entertaining and, at times, quite captivating. No one makes the small screen pop quite like Murphy and the pastel world of the ’60s is like a candy-coated daydream to watch.

Susan Sarandon is a tolerable Bette Davis, but she doesn’t bother going deep into character and attempt that distinctive accent, nor, in my opinion, her overblown way of moving. I don’t really feel as if I’m watching Bette Davis, but an actress reenacting Bette Davis and there is a difference, of course. Jessica Lange makes a slightly more believable Joan, but there still is this wall, so to speak, that separates Lange from Crawford. Murphy likes to stick with the same actors and actresses time and time again. I suggest, occasionally, that he looks outside his circle and recruits new talent. This, again, isn’t to say that Lange and Sarandon aren’t good and decent, and even enjoyable to watch. I just wonder if there weren’t better choices available to take the series to the next level.

Feud is the perfect film for reality TV lovers or cinephiles that get excited about seeing the making of a cult classic unfold onscreen. For those not in the know, I suggest watching in order to get your crash course in How to be a Diva. I give Feud: Bette and Joan a solid three and a half stars for its engaging retelling of one of the greatest celebrity death matches in history.