Batman: The Hero the Public Needs

Few comic book superheroes evoke the imagination of the public like Batman. Each person you ask, young or old, may have a special image of Batman in their heads. For more than 75 years, the Caped Crusader has graced the pages of the comic rack and in the media in various forms. With The Lego Batman Movie, there are multiple forms of the Dark Knight in print and film, yet how does he manage to stay around and remain popular after all these years?

Batman debuted in the comic book world in 1939, on the heels of the breakout success of fellow hero, Superman, the year before. The Dark Knight enjoyed much of the same initial success as the Man of Steel. The journey from page to big screen was quick, predating his 1945 radio guest appearance on the popular Superman radio drama. The character had two multi-part movie serials in 1943 and again in 1949. And for seventeen years, the character was off the air.

Batman made the jump to television in 1966, in the campy live-action series starring Adam West. The ’60s television series mirrored the silliness of the late Golden Age and early Silver Age comic books — stories with ridiculous plots and even crazier gadgets. The television show then went on to influence the comic book stories. Despite the serials and radio drama first appearances, the public had a strong sentiment for this silly ’60s version of Batman. The show’s charming comic book hyperbolic dialogue, visuals and colorful villains throughout the course of three seasons helped solidify the nation’s interpretation of the Caped Crusader for nearly twenty years. Twenty years of syndicated reply helped to reinforce this interpretation. 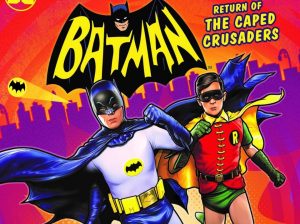 The comics tended to shape the next major media interpretation of Batman with grittier and darker stories in the ’70s and ’80s. Special effects and big budgets allowed for Tim Burton’s 1989 Batman to become another success, spawning multiple sequels. The ’80s to ’90s film franchise died from its excess and self-indulgence — resorting to campier versions of the character and villains. The character was revitalized in Christopher Nolan’s Dark Knight trilogy in 2005. Those films are a darker and more realistic interpretation of the character thus far in live action. And in 2016, Batman was reinterpreted yet again for the eventual Justice League live-action film.

For all the film versions of Batman, there are numerous animated stories, as his early days in the ’70s Super Friends, to the lauded Batman: The Animated Series from the ’90s, to the modern Justice League Action. Even now, the public has accepted a LEGO version of Batman, an amalgam and parody of all that is awesome and silly about the character. There is even an animated movie based on the 1966 Batman live-action series. The animated character has run the gamut from cheesy and campy to incredibly tough and back to over-the-top cartoon.

Seventy-five plus years later, Batman’s popularity remains strong. He’s more ubiquitous than ever before. So, how does he do it? Just as the public has an infinite interpretation of Batman in their mind’s eye, the public has an infinite hunger for the character. The public is willing to accept Batman, in any form, so long as the story is good. And if it’s not, the public knows the next iteration of Batman will be coming soon.