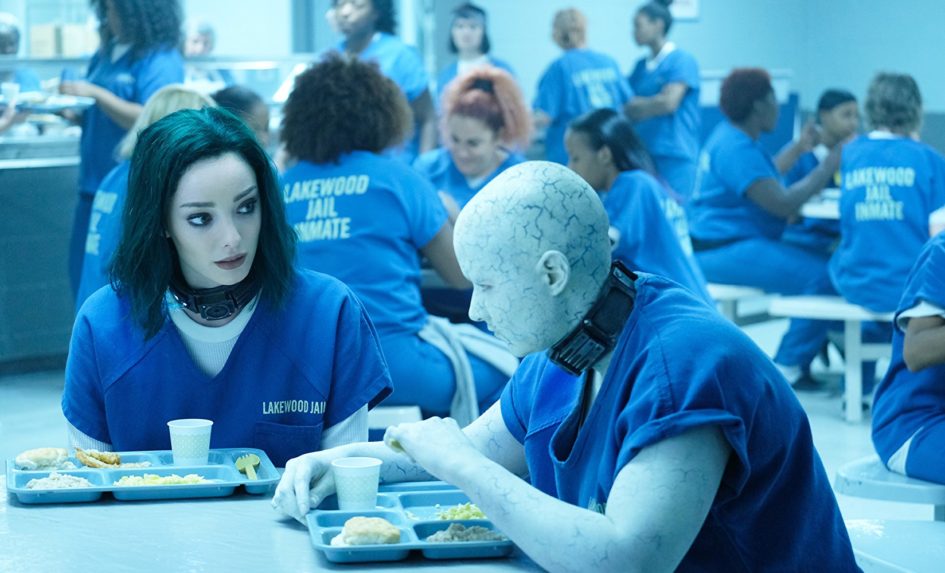 Emma Dumont and Anissa Matlock in The Gifted (2017)

When a television pilot introduces a new series with characters who are, “a couple of freaks, same as you,” I immediately perked up. The Gifted had my full attention. Maybe this wasn’t going to be the generic teeny bopper-outsiders soap opera (where the characters emote for an entire episode) TV show the commercials led me to believe.

Known as the “Marvel action-adventure series” during pre-production, The Gifted tells a story that’s both related to the X-Men film franchise, as well as one that takes place in an alternate reality where those same characters have gone missing. While the tone feels the same (humans are hunting down mutants), this is a TV show that’s primarily focused on a family of “ordinary” human parents who get their lives turned upside down when they discover their children have transformed into mutants.

Many of the movies’ filmmakers returned to work on this TV show, including Bryan Singer, who directed the pilot. Initially, that sounds promising for the series, that so many of the same people who helped create a successful film franchise are involved… until you realize Singer’s overall track record has been recently waning.

In the series premiere, “eXposed,” District Attorney Reed Strucker prosecutes mutants, who are considered deadly and dangerous threats to humankind by the country’s corrupt government. Later that night, while attending a stressful high school dance, his children’s mutant powers are revealed. This leads the mutant task force known as Sentinel Services (in a wink and a nod to fans of the source material) to hunt down the family, attempting to promote peace, while locking up the good guys. Thus, Strucker’s now on the run from the very government agency for which he previously worked. Along the way, he touches base with the Mutant Underground, in hopes of survival.

Thunderbird (John Proudstar), Polaris (Lorna Dane) and Blink (Clarice Fong) all have name recognition from Marvel Comics, but these aren’t the same characters you might have previously read about. Combined with all-new characters specifically created for the series, Showrunner Matt Nix has molded this superhero universe into a powerfully interesting one. Adding to the dynamic is a great Stan Lee cameo (he appears in TV shows now?) in the season premiere.

Jamie Chung’s character, Blink, may not be the most powerful, but she seems to be the most integral to moving along the overall story. She’s my favorite character so far, even though her green contact lenses look super fake. Although briefly seen in Episode 2, the character of Pedro intrigues me the most, as his special powers involve projecting fear toward others. This ability could potentially be incredibly useful while living on the run.

Big themes are addressed, including tolerance for the unknown, acceptance of different people, political activism and the promotion of civil rights. Much like Legion, The Gifted hints at mental health references, but not as blatant. Through two episodes, the small moments are great, like when big sister, Lauren, tries to teach her brother, Andy, how to control his mutant powers or when a character’s ringtone plays the theme to X-Men: The Animated Series, but will they be enough to withhold an interested audience for the long term?

Season 1 is built by only 10 episodes, making this, in essence, a limited series. I fear the storyline will basically follow that of The A-Team from the 1980s. While it was a fun show to watch, rooting for the heroes to escape the pursuing government in different situations week after week, the storyline did grow stale and predictable after a few years. Will these rogue heroes eventually work for the very government they’re running from by Season 5? Or will the series even last more than one year?  Its future may be tied to how it addresses the missing characters (and whether or not it showcases any big-screen crossover storylines).

Overall Thoughts: The Gifted utilizes limited special effects, but they don’t detract from the overall storyline. “Mutie” is a socially unacceptable bad word and passing references are made toward the Brotherhood of Mutants and the Mutant Liberation Front (please have their related characters making crossover appearances in future episodes). How powerful is Andy? How will his powers compare with those of David Haller of Legion? And how many new Marvel TV shows will tout the “most powerful mutant” within the Marvel Comic Universe?

Family gets a different interpretation with this series, as the X-Gene doesn’t discriminate, but all members of this family will go to extreme lengths to help each other out.