The Return of the Living Dead: The Nashville Zombie Walk 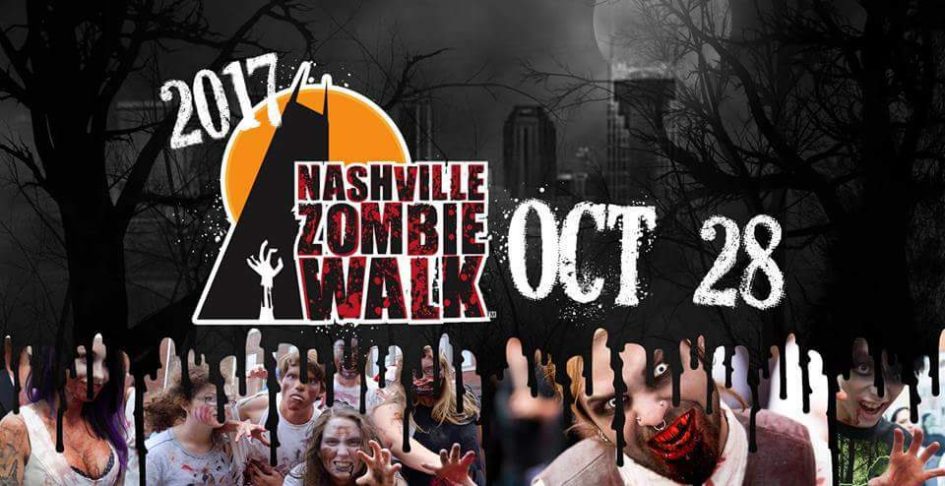 “They’re coming to get you, Barbara.” – Johnny, Night of the Living Dead

It’s amazing how a single phrase like that can usher in a completely new era, but in six words, George Romero and John Russo established what would become a total shift in not only the film industry, but in culture itself. Zombies were resurrected from the dead into something more primal and terrifying than any magical curse or voodoo ritual had ever done on film and it’s in that spirit of terrifying, culture-shifting resurrection that I am proud to officially announce the return of the Nashville Zombie Walk.

Bare with me, though, I’m going to tell you a story first.

If you’ve been following this journey, then you know all about the rise, fall and subsequent revivification of the Nashville Zombie Walk over the last year, but let me just recap for those of you who aren’t familiar. In 2014, the Walk made its final run under the direction of [name redacted] and disappeared without a trace. I spent nearly two years looking for answers as to why no Zombie Walk had occurred and, unsatisfied by lip service and outright stonewalling on the topic, I wrote an article on my blog dragging [name redacted] across the coals for failing Nashville’s horror community by letting such a unique parade die. Within hours of sharing this article on social media, making sure to tag and share with [name redacted] and their fans, I received an email from one of their board members discussing the collapse of the event. After several messages back and forth, the gist of it was, “If you want, you can have it.”

Now, completely clueless as to how to organize anything like this, I began writing articles about my stunted journey to resurrect — or potentially kill — the event I loved so much when Lucas (writer at Zombies In My Blog/The Stump and former producer of the Nashville Zombie Walk) reached out to me to help fill in some of the blanks I was experiencing. This soon led to a partnership in which my ideas and Lucas’ vast array of contacts and expertise have have dug the Zombie Walk out of the shallow grave it was buried in and set it on the road back to Nashville.

So, here’s the moment you’ve all been waiting for, boils and ghouls.

The Nashville Zombie Walk returns from the grave Halloween Weekend (Saturday October 28, 2017 12 pm – 6 pm) in the Gulch area of Nashville. We’ll be leaving around 3 o’clock through The Gulch to Marathon Music Works, where Zombie Walk sponsor Lightning 100 is hosting the Paranormal Rocktivity concert later that evening. We’re planning some music, entertainment and even food trucks at the final destination. It’s not just going to be a Walk, but a complete celebration as the living dead take over Music City and spread some good-natured horror through the streets. We’re also hoping to set a record for food donations for Second Harvest and we’re encouraging everyone who comes — walkers and spectators alike — to bring a nonperishable item or two to contribute. With Thanksgiving barreling down on us by the time the Walk gets here, the contributions will go toward helping those who need it most. In addition to the new route and location, we’re asking people to sign up on the website and let us know they’ll be attending this year. The reason for this is pretty simple: the bigger the numbers, the better the Walk will be in 2018. The people giving us the cash to get the permits and the entertainment want to know how many Zombies and hunters are coming out and, dreamer I am, I’d love to eventually be able to say we had the biggest Zombie Walk in the Southeast, right here in Nashville!

We don’t have an address confirmed yet for the staging area at the start of the event, which is still causing walkers (and me and Lucas) a little bit of stress and I get that. As I’ve explained to a couple of hecklers in the last week, we’re trying to get a deal for some good parking locked down so people don’t have to park miles away from the event and walk to it and, if you’re following us on Facebook at Nashville Zombie Walk, then you’ll be certain to find out all about it as soon as we make the announcement. We should be telling everyone a definite address on Monday or Tuesday at the latest. I’ve also heard some folks upset over the change in location. The event has started out most years in Riverfront Park and has gone up Broadway and looped back around. But this is a new year and a chance to make things fresh and original. After walking the route with Lucas a few weeks ago, I can honestly say that I don’t think anyone will be disappointed.

So like us Facebook, bookmark the Zombie Walk’s homepage, and join us on the 28th when we #makenashvillestrange again!