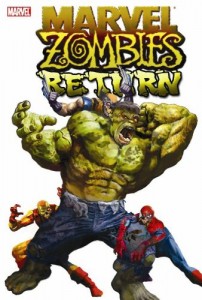 This chapter of the saga follows the conclusion of Marvel Zombies 2, when Spider-Man, Wolverine, Luke Cage, Wasp, Black Panther, Giant-Man get teleported into oblivion. This is actually a parallel or sideways story, instead of a true sequel (similar to those made popular by the TV series, Lost).

When the molecules reassembled his body, all Spider-Man’s previous broken bones and missing body parts were reassembled. In this new reality, he arrives onto a new planet — the uninfected Earth-Z. Book One focuses on zombie Spider-Man, as he unsucessfully attempts to control The Hunger and possibly permanently restore himself… until he’s attacked by The Sinister Six and then Kingpin. Book Two spotlights Giant-Man, as he’s teleported to the moon, he devours Uatu, The Watcher, and gains trans-dimensional teleportation powers, but must find the device-key to unlock The Watcher’s secrets, which is under Tony Stark’s supervision. Book Three focuses on Wolverine, who must stop zombie Wolverine, with the assistance of Kity Pryde and zombie Spider-Man (who believes he has created an antidote to The Hunger to save mankind). Book Four showcases Hulk, who has returned to the moon of Earth-X from exile with friends to battle Zombie Giant-Man and his undead minions. And finally, Book Five quickly details how the other undead heroes perished before setting up the ultimate zed battle royale, a fitting conclusion to this chapter of the saga.

Strenght: Each of the books / chapters are interwoven. I enjoyed that.
Weakness: The ending is a bit ambigous to understand.
WTF Moment: At the conclusion, did any of this really happen? Or is it simply an ouroboros?

Notable Quotes:
– “My Zombie-senses are tingling! They detect the presence of meat!”
– “Only one rule with the Hunger Gospel, and that’s flesh without end.”
– “The multiverse is now my all-you-can-eat buffet!”
– “That Wolverine… is a zombie.”
– “Come inside my lab and I’ll give you the Cliff’s Notes version of the end of the world.”
– “Don’t want to start a new trend: Ninja Zombies.”
– “Thanks for dropping by… we’ve been starved for company!”
– “Hulk is not man! Hulk is Hulk!”