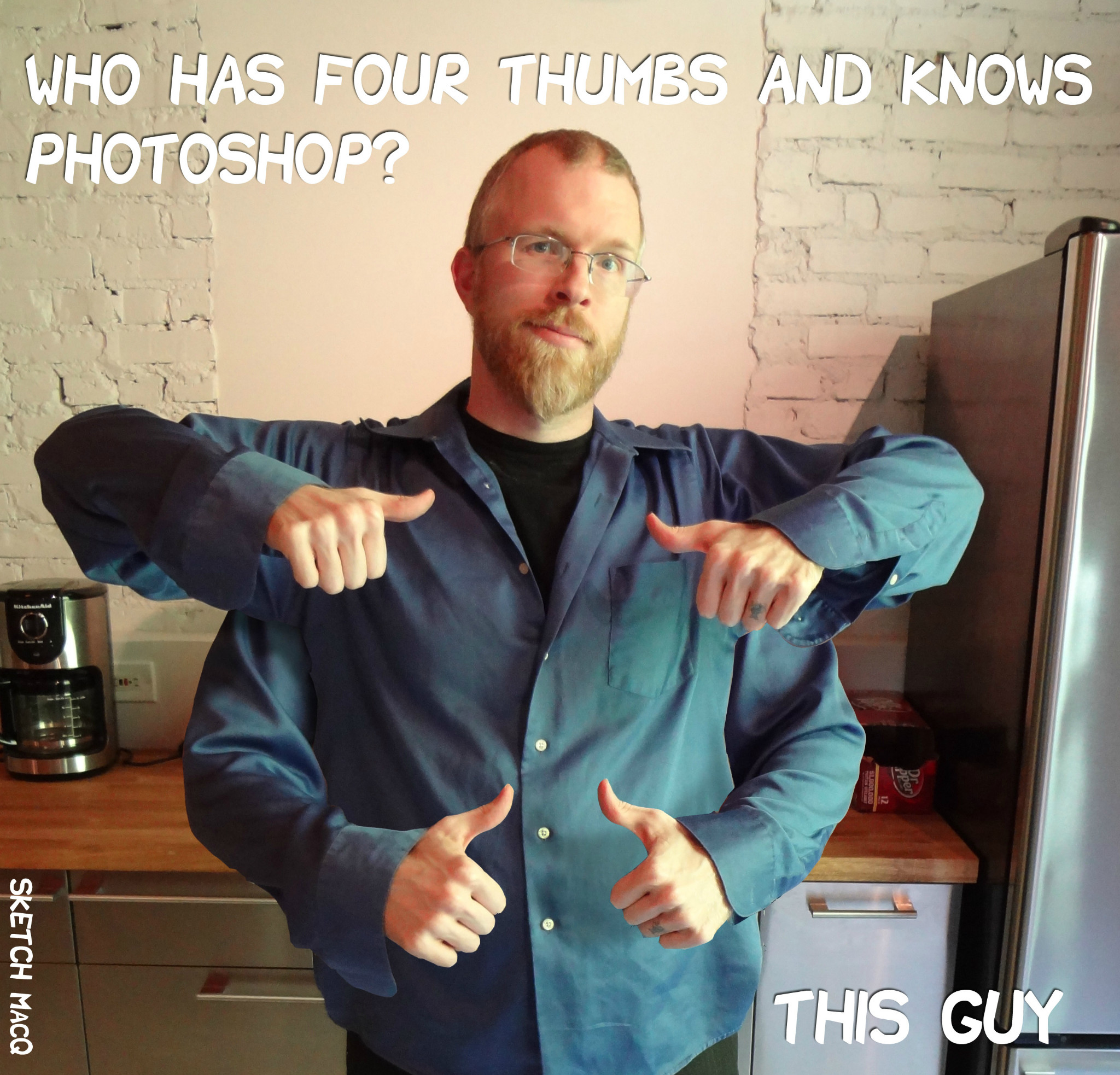 Per Matt
Sketch MacQuinor is the co-Lead Animator of Squidbillies, which airs on the Adult Swim late-night programming block of Cartoon Network. Sketch will be hosting several panels at MomoCon this weekend, but before he makes it to the convention, we got a sneak-preview interview with him. Sketch discusses animating those impoverished hillbilly squids, as well as the Kickstarter campaign behind writing his first book, Hearts and Crafts and spending his down time performing at Renaissance Fairs!

Before working for Squidbillies, was there any sort of doodle that you used to draw or animate just for fun, that led you to wanting to work in the animation field?
– “I experimented with animation in high school for fun and naturally studied it in college. I’ve been having people call me ‘Sketch’ since my freshman year of high school. Like all animators, I just love to draw.”

How did you get your start working in animation?
– “I got into animation by studying it at SCAD. I got a job as a compositor on Aqua Teens. When they were looking for studios in Atlanta to do tests for the proposed Squidbillies project, I was one of the only people in Atlanta who knew how to use Flash and the studio I worked for then wowwed them. I have been a part of Squidbillies since preproduction.”

Could you tell me how you got into working with Williams Street?
– “To clarify, I don’t work for Williams Street. I work for Awesome Inc, who Adult Swim employs to do the animation for Squidbillies and Aqua Teens.”

What is an average day like, as an animator? I’d assume no two days are alike.
– “My studio is generally 10 people, quietly working at their computers, occasionally getting up to interact or to eat things. We’re merged with another studio, Bento Box Atlanta. They’re located a couple of miles away from us and work on Out There, The Awesomes, and probably some other things I never hear about because I don’t work at that location. From what I’m told, their days are usually a big room FULL of animators, wall to wall, quiety working and occasionally getting up to interact or eat things. Also, that’s probably what it’s like at Floyd Country, where they make Archer. Still, you generally have really awesome coworkers and the work isn’t hard.”

How many people generally work in a TV show’s animation department?
– “Depends on the show and the time frame. I could do the animation on a single episode of Squidbillies by myself if I had 12 weeks. We are able to produce them faster, of course with a team of four animators. And we work with the team of compositors (two of them) and that’s after Williams Street sends us the animatic produced by all of their sound people, editors, writers, and producers.”

Is this your first MomoCon? Do you generally attend many conventions, where you can get direct feedback from your work?
– “It might be my fourth or fifth. I attend many conventions, though I’ve started only attending the ones I’m a guest at and don’t have to pay for. Since there’s a convention in Atlanta every three weeks I don’t make the time for them all. I missed Anachrocon last weekend because I went to a friend’s all-day bachelor party on Saturday and Sunday I opted for drawing a webcomic and going to a pajama Oscars party with the missus. The cons that I am attending for certain this year are Momocon and 221B Con (a Sherlock Holmes convention where I’ll be putting on a puppet show). If they remember to invite me this year, AWA (Anime Weekend Atlanta). I will go to DragonCon but because it’s so crowded I’ve resigned myself to not getting into panels and just running around dressed as Freakazoid.”

Who is your favorite Squidbillies character to animate?
– “Squid Satan is great fun because he’s a big, crazy mess of evil snakes. I love Dan Halen, because he’s eloquent and evil. Rusty is adorable.”

Does the animation team of Squidbillies use hand-painted cels or is it all CGI?
– “Nobody uses cels anymore. It’s cheaper and faster to just draw everything in the computer. And we reuse a lot of art, because of the digital format. We still use some of the same eye, mouth, and head art for most of the characters that I originally drew eight years ago during preproduction.

As an animator, do you have much interaction with the other Adult Swim shows? Have you ever sat in to work with any others?
– “I don’t work at Williams Street, but the studios I work for have worked on other shows. I worked for two seasons of Aqua Teen and on the movie. I did a little work on Perfect Hair Forever.”

As a show, is Squidbillies animated any differently than the other shows of Adult Swim?
– “Squidbillies is animated in flash and composited together in After Effects. Most other shows use more complex and expensive setups. The most expensive shows are probably outsourcing some work overseas, like The Simpsons and Family Guy.“

Were there ever any scenes too crazy for late-night TV?
– “That sort of thing gets sorted out before it gets to me by Standards and Practices. This is a team of lawyers who hide behind their desks and say things like, ‘The color of the water in that toilet is too brown. You can make it black like ink if you want, but it can’t look like poopies.’ And this is on the same network where Tim and Eric shoot each other with a diarrhea gun.”

Do the animators ever play pranks on the voice actors of Squidbillies?
– “We don’t get many voice actors at my studio. Well, there’s me, but my work never makes it to Adult Swim shows, so that doesn’t count. As for pranks, well there was once a piece of art in a scene that was done in sprite art style (16 bit/32 bit videogame style). I approached the animator who animated it and told her there was something wrong with her scene. I opened the file I’d prepared for her and the sprite art scene she’d made froze and in drove Turbo Tastic from Wreck-It Ralph. Not really a prank, just a lunch hour invested in a light joke. Sorry, not very exciting. Other studios in the area will give you better stories, I’m sure.”

Do you collect any hand-painted animation cels of past shows?
– “I can’t afford that sort of hobby at present. Squids doesn’t have cels. Since it’s all digital, if you want original art, you have to print it. Sometimes, for fans I’ll sign my favorite design for Squid Satan, that’s a crazy caricature of the voice of Early Cuyler, Unknown Hinson.”

I’ve found it’s difficult to keep my hand-painted cels in great condition. Do you have any storage recommendations?
– “I have none. I doubt they’d display well in the fridge.”

Away from Squidbillies, you like to attend Ren fests. What do you do at them?
– “I used to be a street character, interacting with patrons dressed as a highwayman or an adorable goblin. I still perform at certain festivals, sometimes, but they do eat your weekends up like crazy.”

Would you mind telling me a little about writing your first book, Hearts and Crafts?
– “I wrote it to inspire people to keep hope in love alive. I eventually illustrated it in Flash, the same program we use to animate Squidbillies. I was able to raise most of the costs for it with a Kickstarter and came very close to fulfilling it.”

For More Sketch:
His Webpage: Too Many Ideas