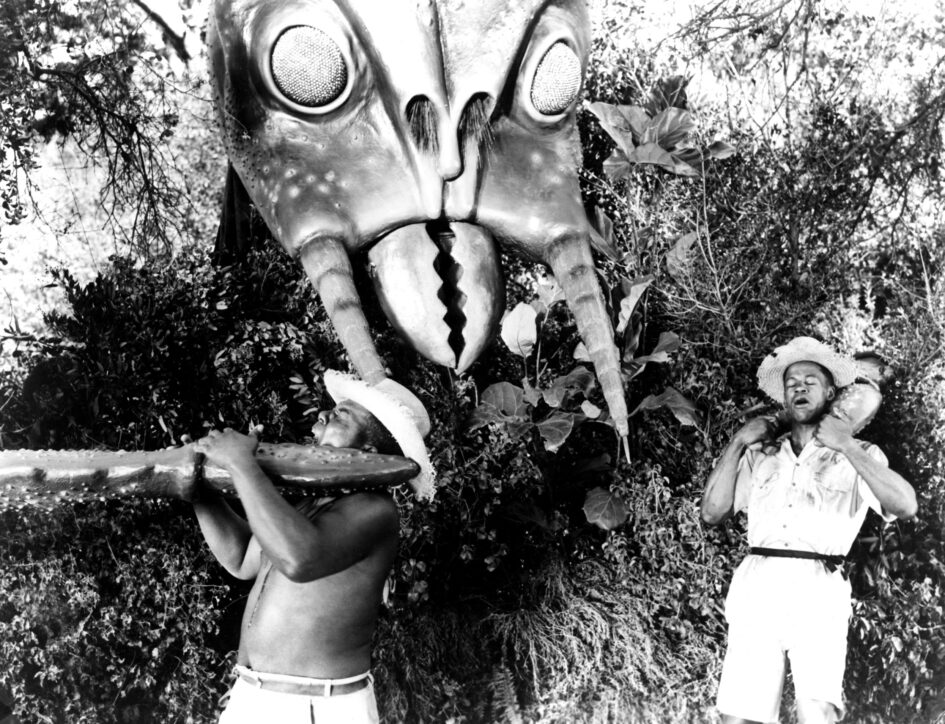 Per Matt
Wasps. I’ve had terrible luck with the insects throughout my life. While I’ve never been stung by a bee (knock on wood), I’ve been stung my many wasps, hornets and the like in different situations. (I’m usually unaware of them until it’s too late.) So, when I discovered the Monster from Green Hell was actually a giant, irradiated killer wasp, I immediately shuddered from each and every time I’ve been stung in the past.

Borrowing a theme from many cult classics of the ’50s, Monster has a sci-fi story, as told during the atomic age. While preparing to send astronauts into orbit, a variety of living creatures are substituted as test subjects and evaluated upon their return. But when a rocket ship veers off course and crash lands in Africa, the government scientists soon learn their circumstances have taken a turn for the worst.

You see, after absorbing cosmic radiation for a couple of days, the pair of space-traveling wasps have mutated into gigantic monsters and the natives are restless. The villagers may be superstitious, but they know better than to fight scientific experiments gone horribly wrong.

Things were much simpler back then, when computers were the size of an entire room and cosmic radiation seemed very scary. It still is, but humanity has learned a thing or two almost 70 years later (don’t even get me started on Van Allen Belts). Green Hell cashes in on a hyped-up fear of the unknown with its storyline, but the true highlight of the film is its stop-motion animation.

The pair of spacefaring wasps never fully reveal themselves, often sneaking around corners (as if that was possible) before striking prey. An encounter with a python didn’t last too long, but it was enjoyable. Unfortunately, this isn’t the work of Ray Harryhausen, but if you enjoy giant creatures in your monster features, you should definitely check this one out!

Available now, The Film Detective has released Kenneth G. Crane’s B-movie as a special-edition Blu-ray and DVD featuring a new 4k transfer, exclusive bonus features and a rare, colorized version of the film’s finale. The restored movie is a blast from the past, which this cinema aficionado enjoyed visiting.

I truly appreciated watching the featurette, “Missouri Born: The Films of Jim Davis.” Not knowing too much about the veteran actor beforehand, I was pleasantly surprised to have recognized him in a couple of projects. Also available on the Blu-ray is commentary with artist/author Stephen R. Bissette and The Men Behind the Monsters, an essay by author Don Stradley featured in a full-color booklet.

The special edition features both widescreen (1.85:1) and full frame (1.33:1) versions of the movie. Monster From Green Hell is available on Blu-ray ($24.95) and DVD ($19.95) as the latest in a series of collaborations between TFD and The Wade Williams Collection.

While I have grown to love genre films that I may have missed watching throughout the years, I am thankful for The Film Detective bringing new life to these cult classics for the digital age. And the perspective of film historians discussing elements of the films’ importance is what I have enjoyed the most — I only wish there were more featurettes included with each release.