Monsters are Everywhere in the Korean TV Series, Sweet Home

As a haunter, I have always been intrigued with horror. I mean, you kinda have to be, in this business. Scary things are just what we do. Immersion is the name of the game for all haunt owners. You have to ensure that your customers leave their “real world” issues at the door. You create a world specific for them, free from those issues we all have. Haunted attractions make movies, starring the paying public.

It has been a thought of mine about what could happen if the horrors we portray in the haunted house were real. If, by some chance, a little magic happened and all the monsters inside became real, how would they react? Would they be ferocious creatures wanting to dine on flesh? Or would they be tame, having no idea what they really were? It’s kind of the idea around aggressive dogs: Were they born aggressive or did they learn the behavior? I know not many of you have stopped to think about it, but while I was watching Sweet Home on Netflix, this thought entered my head.

Sweet Home is a horror television series made in Korea. It is based on a popular webtoon (online comic book) sharing the same name by Kim Kan-bi and Hwang Young-chan. In the show, Cha Hyun-su (Song Kang) is a young man who moves into an apartment complex after a car accident claims the lives of his family. Shortly after moving in, weird things start happening to the people around him. Soon, Cha finds himself fighting for his life as the residents of the complex become bloodthirsty monsters. Only with the help of Pyeon Sang-Wook (Lee Jin-Wook) does Cha and the rest of the non-infected citizens stand a chance at stopping this ever-growing horde of creatures. 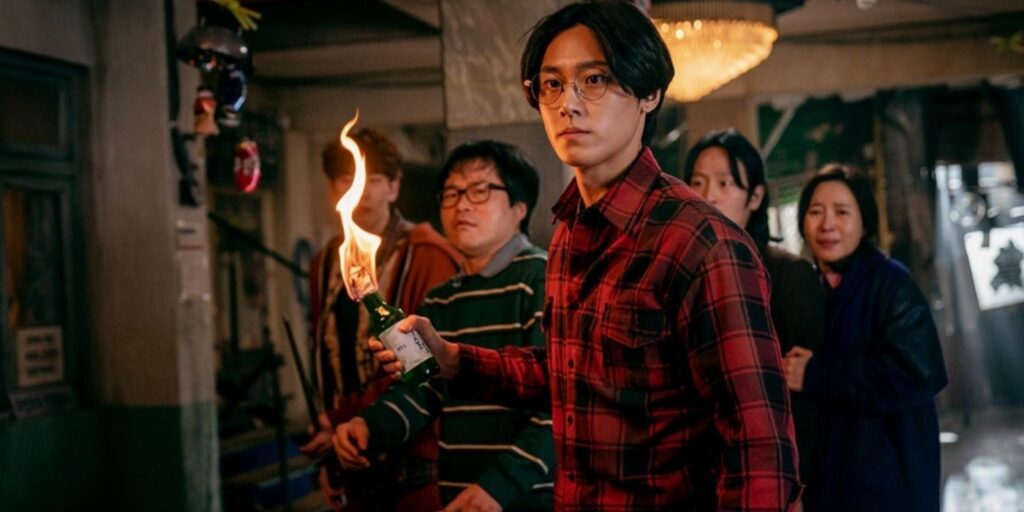 Sweet Home falls into the category of post-apocalyptic survival shows, but it’s somewhat different. In most series I have watched, the “apocalypse” led to Zombies or environmental disasters or something of that sort. Sweet Home is the first television show that I have seen focusing on monsters as the results. It’s refreshing to see someone do something new. Don’t get me wrong: shows like The Walking Dead and Snowpiercer are good. But no other program that I have seen has gone deep into multiple types of monster lore. In only its first season, Sweet Home has broken molds.

So, what kind of monsters can you find in Sweet Home? Before I get into that, I think I should explain what the definition of monster is in this world. Monsters in Sweet Home are human beings who have basically fallen victim to their desires. There is an evil entity that finds these broken people, and corrupts them further. Each of the monsters in the show so far have had their own unique powers and abilities. One of the monsters has incredible speed. Another appears more or less like a spider. And there is even a monster with an extremely long tongue (one that would make Gene Simmons proud). They are incredibly cool to see on the screen, but my favorite has to be the one that I call the Hulk monster. I believe the show labels it as the Steroid Monster (and based off his looks, I agree with that label). He is incredibly large and completely covered in muscles. A mere swat from this guy, and it is lights out forever for you. The show currently features around 11 different monsters in only its first season. So, you know there are going to be tons more before it is all said and done.

What would I do if this fantasy world happened to me in real life? First thing I would do is start looking for the warning signs of people about to change. As the monsters in Sweet Home are former humans, I would want to know if there are any symptoms to look out for. Separating those people from the non-infected would be crucial to helping limit the spread, and knowing who I can trust to not become one of them.

Next, since I would be in an apartment complex, my goal would be to get everyone who is not infected off the upper floors of the building. I would want ground-level access. If we go to the roof, we would be too limited in our escape options. We don’t know yet if monsters can fly, so the roof could be a death trap. Also, creatures like the Steroid Monster could damage support structures, bringing the building down. At least on the ground floor, we could possibly escape before the building collapses. Plus, the ground floor may give us access to the basement and any underground access points that may be there. Those access routes give use more options to escape.

Once I have secured the ground floors, it is time to figure out what we have to work with. I need to know the backgrounds on the people around me. I need to know strengths and weaknesses. Is someone a former Marine? Does someone have engineering experience? Any medics in the group? All of these are things I need to know, so we can be sure to have the right people doing the right jobs. I don’t want the medics on the frontline of an attack, should it happen, but I do want fighters and anyone trained in weapons. Knowing what the skills the people around you have is incredibly important for survival. Beyond them, we need to know what tools, weapons and other essentials we have. We may have to defend ourselves against a multitude of different monsters. It’s not like The Walking Dead, where we just need to destroy their brains. So, having an array of tools and weapons is vital.

Lastly, we have to start trying to communicate with the outside world. I need to know if this is something that is localized to the building or city I am in, or is this a global event. If it is localized, we need to find a way to contact the military or police for assistance. They may not be able to get to us quickly, but letting them know where we are and how many people we have will get us aid sooner than if they don’t know we are there. If this is a global event, then we have to start preparing for venturing outside the building. Finding food, water and medical supplies will greatly increase our chances of surviving this event. The sooner we can get out of the apartment and find these resources, the better our position will become.

I know you came here for a rating of Sweet Home. I give the show five out of five stars. It is the only perfect score I have been able to give to a TV show. It also happens to be the second perfect rating I have given to Korean horror media (the first being Train to Busan). I am hooked on this show, and, as you can see from my “would you survive” segments above, it gave me lots to think about. Be sure to check out this series on Netflix today!