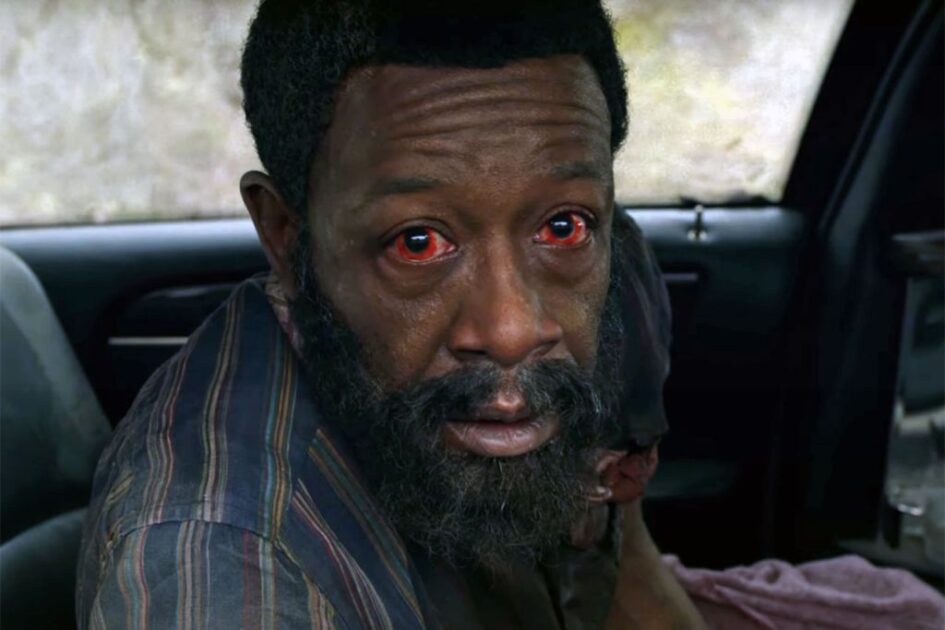 On the verge of death, Morgan Jones fights to save his friends in Fear the Walking Dead's Season 6.

Halloween is near, so naturally it’s time for more Fear!

When last we checked in with Fear, Morgan was critically wounded and his crew was taken hostage by their enemy. As Season 6 begins, Morgan’s looking haggard, eyes bloodshot, limping, not fully recovered from his flesh wound, courtesy of Virginia. He’s all alone and a mysterious bounty hunter has been summoned to hunt him down. “The End is the Beginning” is more than just a season premiere — it’s finally a full transformation for the character.

In past seasons, Morgan’s been an intriguing supporting character (while almost always a loner), but when he was pushed into the spotlight as the leader of a group, the writers never did him any favors, making him more wishy-washy than anything else, which was no fault of actor Lennie James, who’s great; he did everything that was ever asked of him. All it took was six years for the producers to finally get it right. (never-ending eye rolls never end)

For the hundredth time, Morgan has had a change of heart, drastically switching his disposition from the previous season (which is getting very old with this character). It’s as if the writers instantly get bored after writing a few episodes with the character, hoping to experiment with the audience’s reactions. This is one VERY BIG reason why I’m not really a fan of the small-screen Morgan Jones. He may be a little too complicated for the showrunners to figure out. Or maybe he doesn’t actually have a backbone?

Six new characters are introduced in this episode, three of which are killed off in order for Morgan, once again, to make a change (hopefully for the last time).

Bringing in a bounty hunter to the Zombie-infested wild, wild West was a great addition to the show’s setting, which is actually filmed in Texas (there’s such great scenery). I get tickled every time I feel like the show goes out of its way to pay homage to past movies and shows within this underappreciated genre. With an all-new intro, Season 6 quickly made a few introductions to the overall mythology: The undead receive a new nickname (“rotters”), we now know that severed heads can reanimate and gangrene (the decomposition of body tissue) can trick walkers into thinking someone’s already dead… even if they’re not. I guess the smell of death can be a powerful thing.

There’s also a new location added to the storyline. When a hydroelectric dam gave way, at the bottom of its reservoir was a little town that previously stood there. As it can’t be found on any map, Morgan and his newfound friend, Rachel and her recently delivered child (Please stop introducing infants to TWD!) are safe… for now. And since she was named after Morgan, the baby will naturally survive for at least a few seasons.

As he rides away on horseback, wearing a cowboy hat, a heavy coat and a bushy beard, Morgan Jones is now a one-man wrecking crew at the end of the world. But for how long?

“Morgan Jones is dead… and you are dealing with somebody else now.”