My Guilty Pleasure: Attack of the Lederhosen Zombies 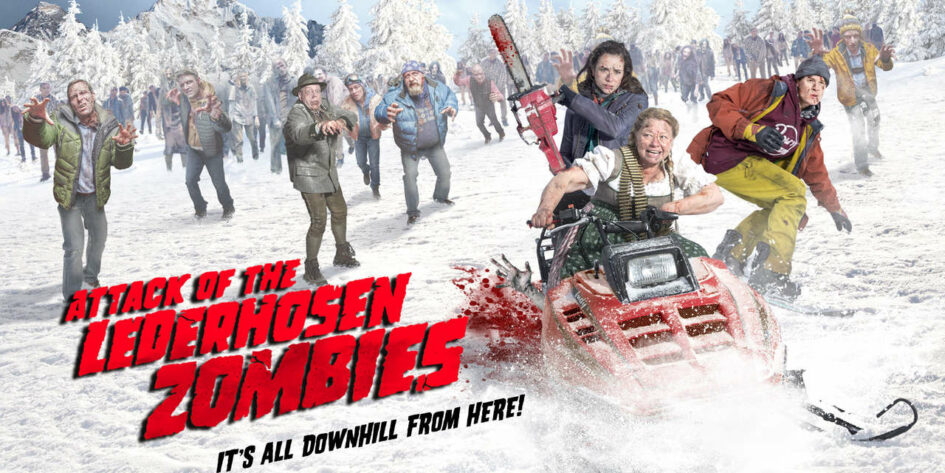 Holiday horror, Zombie comedy or guilty pleasure, Attack of the Lederhosen (or Alpine Zombies, which was used during production) is an undead Austrian movie featuring snowboarders fighting off hordes of the undead on a mountaintop resort. It’s definitely a “Night of the Living Losers,” as the fourth-wall-breaking film is a creature feature with a side of doomsday preppers, which briefly throws in a minor climate-change plot before tackling mutating flesh-eating wildlife.

These nightmare creatures only slow their roll whenever they hear music, so this version of the Zombie Apocalypse is somewhat original, as Danish and German languages, as well as spotty English are all spoken. It’s a yodeling, subtitled foreign language mish-mash that’s down with the sickness. Solanum Plus 10, a high-performance crystalizing fluid, is a sort of toxic waste that turns humans (and the wildlife that comes into contact with it) into a mutant-Zombie hybrid and blood’s the main course at this snow resort’s end-of-the-season happy hour.

Mostly filmed in Italy, this Zom Com was the first Zombie film to come out of Austria. Lederhosen‘s 1.5 hour runtime feels about right, but it still could have been trimmed a bit more by removing the more abrasive eye-rolling moments. With dialogue like, “Don’t dude me,” and “The Zombies are dead meat,” you kinda know what you’re getting yourself into.

Released in 2016, its production values aren’t terrible, but most of the budget feels like it was spent filming the outside stunt-work and scenery, a portion of which was used on the special effects, which border on cheesy and ridiculous, while still being somewhat believable (as far as low-budget foreign horror films go).

For the longest time, I’ve been meaning to write a column that celebrates horror movies, despite their budgets and their quality, including ones you may have never heard about (or wanted to watch). These are my guilty pleasures.

Combining a seasonal life-or-death scenario with Zombies and snow, and writing about it around Christmastime just felt right, even if everything within the film screams “this is just wrong.” It was not difficult to root for the carnage, as Patient Zero belches day-glow-green slime, which is then transmitted with each subsequent attack… even the killer deer have glowing green eyes! How can you not enjoy that?

The secret of the ooze is simply a McGuffin to bring the undead to a remote mountainside resort. It’s a race against time and, spoiler alert, with a whole bunch of ridiculous kills, it never reaches the outside world.

With all my pre-viewing knowledge coming from its brief satellite summary, Attack of the Lederhosen Zombies is basically exactly what I was expecting, but it is also an enjoyable quick viewing on a Sunday morning, while multitasking and attempting to wake up. I don’t think it ever won any awards, but it’s not the worst movie of all time, either.

I look forward to cleaning out my DVR with future guilty pleasures and writing up my reactions from the viewings. Feel free to offer up any suggestions you might have and they might make a future column appearance.