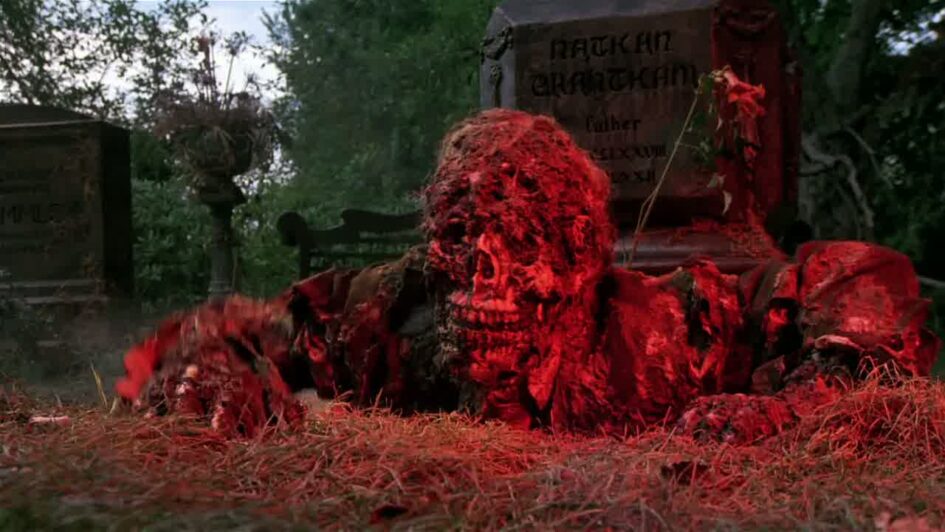 What kind of images instantly come to your mind when Creepshow is mentioned? Not Shudder’s remake, but the movie from the ’80s.

Is it Zombies returning from the grave? A meteorite that brings alien vegetation to a family farm? A homewrecker who challenges how long he can hold his breath? A mysterious 147-year-old-box hidden under the stairs? Or possibly a germophobe gettin’ buggy? Each of these five tales of terror offers full scoops of ’80s nostalgia onto your horror palate.

Why did it take so long for me to finally watch this one? I’ve known about it forever and all its pop-culture references, but until recently, I hadn’t watched the full movie. It’s been patiently awaiting my time, hidden deep within my DVR, originally recorded way back in October during AMC’s FearFest, so I’ve really got no excuse in not having seen it. I mean, pairing filmmaker George Romero with writer Stephen King and special-effects wizard Tom Savini seems like a natural today, just like it did back in the day.

These fear fables feature the big-named actors of Ed Harris, Ted Danson and Leslie Nielson in some nicely dramatic, but smaller-roles than they might have been accustomed, but taking the center stage are nightmare creatures and other creepy-crawly monsters that could make you scared of the dark (well, maybe in the ’80s). All in all, they remind me of reading Fangoria or watching Tales From the Darkside back in the day.

I found it humorous to watch Stephen King’s attempts at acting, but I found it interesting that his “awful anecdote” takes place not too far from Castle Rock. And I was pleasantly surprised that the lurid lexicons featured very little politics, at least compared to Romero’s singular Zombie films and King’s novels. The very cool effect of transitioning from comic book to feature film and vice versa was also a great nod to the feature film’s EC Comics source material, as well.

The special effects of these “jolting tales of horror” still look good, more than 37 years later, although the style and set design feel quite dated. One of these days, I’ll finally get around to watching Greg Nicotero’s remake, which I’m sure crafts updated stories.

While I can’t admit to originally reading the Creepshow comics, I really do miss watching great horror anthology series on television. I hope Nicotero’s adaptation might encourage the creation of other similarly themed series to eventually receive the greenlight.

All in all, this movie feels very ’80s, bringing both the best and the worst of the decade onto the screen. If for some reason you still haven’t watched this one, go ahead and give it a shot and then compare it to the reimagined series.