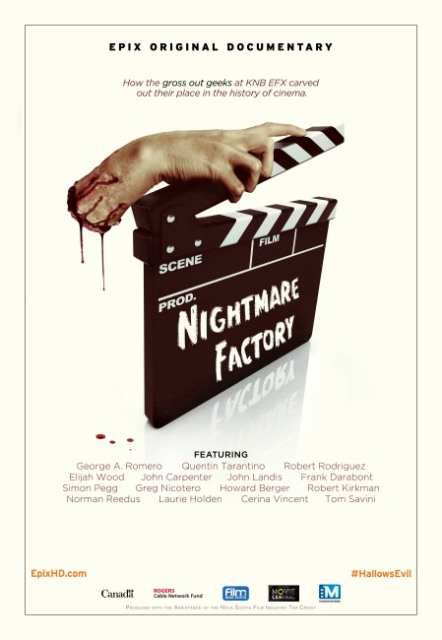 You may recognize Greg Nicotero as one of the creative minds behind AMC’s The Walking Dead, but you may not know that his special-effects studio, the KNB EFX Group, has been the go-to company of many top-notch directors for more than 20 years. Nightmare Factory is a documentary that explores the origins of KNB, which has been hired to work on more than 900 movies and has won many awards throughout the years.

KNB was founded by gore masters Howard Berger, Robert Kurtzman and Greg Nicotero, but the studio’s success was far from guaranteed. In 1989, Nicotero dropped out of medical school in order to give Hollywood a shot. That’s where he met up with Berger and Kurtzman, later becoming one of the most prolific makeup special-effects companies in the world.

Nightmare Factory jumps around quite a bit, beginning with the studio’s origin story, delving deep into Nicotero’s background and working in quite a few horror icons along the way, discussing their favorite horror movies as kids and wrapping up with Tom Savini’s special-effects school.

The majority of the movie focuses on Nicotero, often showcasing home movies filmed with his brother as they were children and his family members even get interviewed to discuss their reenactments. Greg became a horror-movie geek at a very young age, predicting as a kid that he would work with monsters when he grew up. Mission accomplished.

Guest appearances by Quentin Tarantino, Robert Rodriguez, Frank Darabont, Norman Reedus, Elijah Wood, Laurie Holden and Robert Kirkman all compliment Nicotero as being a hard-working perfectionist and KNB being their first choice for special-effects studios to work with on future projects. Many behind-the-scenes videos are shown that were filmed personally by Nicotero, between takes on different movie sets. This could be one reason why Nightmare Factory is not released in HD, but it is entertaining, regardless.

With modern-day blockbusters primarily driven by makeup and special-effects experts, having a studio with the talent and experience of KNB is practically a necessity these days. It’s great to see how the company laid its foundation and grew to become a powerhouse in Hollywood.

Strength: Great behind-the-scenes entertainment.
Weakness: Overall, the documentary feels unfocused.
WTF Moment: As children, Nicotero and his brother randomly met George Romero and were invited to visit the set of Dawn of the Dead.