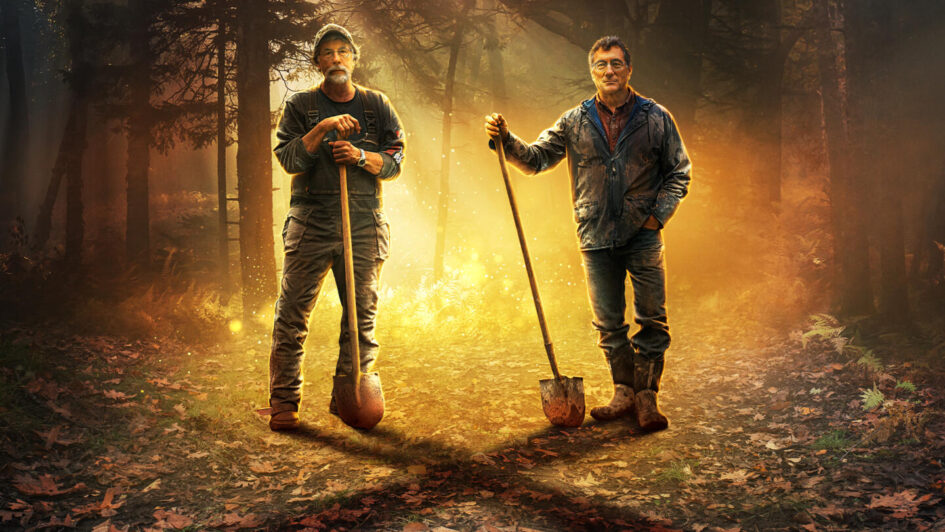 2021 seems like it’ll be momentous for The Curse of Oak Island. There’s a whole lotta hope floating about the treasure hunters as Season 9 begins. Due to the global pandemic, their plans dramatically changed last year, which amounted to nothing more than a tease and the eventual fear that they’re Digging Toward Debt. But this year is different, as new discoveries are made.

According to the 227-year-old legend, there’s gold out there… somewhere. But where could it be? They’ve been searching for quite a while now and no one has seemingly found any evidence of it until now. Answers are hard to find, but after a scrap piece of metal is taken to St. Mary’s University for elemental analysis, its chemical composition reveals pyrite (fool’s gold), copper, silver and actual gold via electron microscope. Could this be rose gold or the ancient tumbaga gold, originally discovered by Spanish conquistadores?

“This is the year that everything seems to be coming together…” until it falls apart before it seemingly starts.

In accordance with the Department of Community, Culture and Heritage guidelines, new government regulations and more supervision is necessary for all treasure hunting this year. And when artifacts of indiginous peoples are discovered, all digging with the exception of a small portion must cease before the Acadia First Nation gives its approval. So, what does this mean for the hunt?

Science has validated their efforts and persistence in the past, but now they must pivot once more, preparing for the unknown. Four acres are currently off limits to digging on an island that they own. They risk losing control of their own land by following the new rules and regulations of Novia Scotia, where the legendary secrets could be out of reach. Or maybe not.

The fellowship continues with digging a series of up to 20 six-inch boreholes within a grid to measure the soil and water to figure out where to place a 10-foot hole to be dug this year. Just like in years past, it will not be easy as more roadblocks appear. Practically all work in the Southeastern corner of The Swamp stops (for now) and the mysterious cobblestone road must be pushed aside.

It doesn’t surprise me that Canada’s bringing tighter oversight and regulations going forward. What does surprise me is how long it took for the government to finally take the action.

For many years, people from all over Europe went out of their way to visit Oak Island, whether they were depositors or searchers. The secrets of the island have prevailed for so long, this crew really doesn’t know what it feels like to have any success overshadowed by something negative.

Here’s to hoping they make some serious progress in Season 9. But I won’t hold my breath with comments like this:

“It almost seems that we can’t miss…”

The Curse of Oak Island may be taking baby steps toward providing some answers and finally revealing the ultimate location of The Money Pit. I mean, they’re finally “going for the gold,” so why not make a major discovery now? The ratings are still pretty good, so I wouldn’t be surprised if this treasure hunt wasn’t extended a little longer.

Mark My Words: When the ratings eventually dip, that is when you can expect something major to be revealed.

We shall wait and watch…