Once Again, Preacher Defies Definition as a TV Show 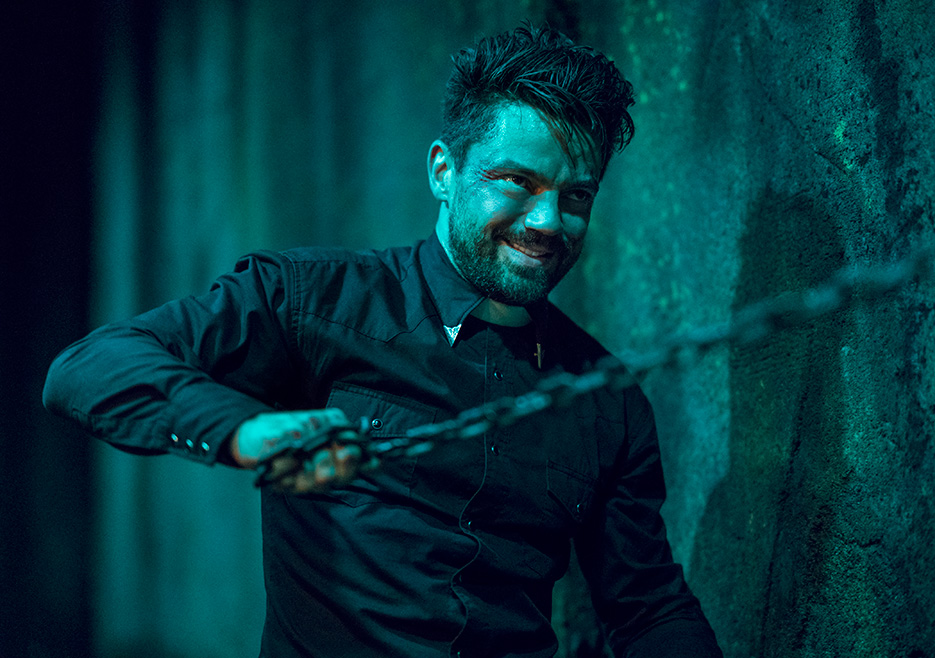 Jesse (Dominic Cooper) releases a lifetime of revenge in the Preacher season finale, The Light Above. Photo by Alfonso Bresciani/AMC/Sony Pictures Television.

Jesse just wants his soul back. Tulip just wants to escape Gran’ma. Cass just wants to be with Tulip. A cult of wannabe vampires just wants everlasting life. Herr Starr just wants Jesse as his Messiah for a new world. Arseface and Hitler just want to escape Hell for good. And Genesis… well, Genesis is laying low (along with God) in Season 3 of Preacher.

While Season 1 defined these characters’ backstories and Season 2 was more of a road trip/buddy story, the rules have changed for the third season. Tulip and Jesse must deal with the repercussions of making blood pacts with Madam L’ Angelle (Jesse’s grandmother). She’s a soul sucker who’s literally made a deal with the devil. God is still missing, but he’s got a plan (and it involves the O’Hare family curse). Cass learns that being a vampire in Angelville is bad for his health. The Allfather is larger than life. So many Humperdoos. Arseface and Hitler battle The Angel of Death and The Saint of Killers for tidbits of screen time, while Satan makes multiple appearances (and gets too much attention).

“You never know what a person’ll say, ’til you ask ’em right.”

As situations change, enemies become friends and friends become frenemies. Debts are paid, characters’ dark sides are revealed and the main focus seems to be centered on monsters and magic. Religious beliefs are turned upside down as The Grail has seemingly nudged the world ever closer toward a global Apocalypse. There really is no highway to Hell, it’s more like a bus stop to oblivion, driven by Distant Vistas Express. And all of these events took place within 10 episodes. Talk about cramming multiple storylines into a short amount of time.

Just when you think you can predict where the ongoing storylines for Preacher are headed, the writers pull a hard turn. The show is that unpredictable. And violent. And bloody outrageous. It’s great, but it just defies definition. Unless you’ve read the comic book source material, then you already know this much.

Of all that’s already been said about the show, it REALLY needs Talking Preacher as an aftershow to help grow its audience, unlike Fear The Walking Dead, which had a built-in audience. If only someone who already has a TV show on the network had plenty of geek cred to really do the show some justice… paging Kevin Smith! He’s already got Comic Book Men and would be perfect for the role. Why isn’t he already hosting the show? Let’s get it going for next year’s Season 4, which has yet to get the greenlight by AMC, but we sure are hoping it happens. Cassidy is held hostage (again), The Saint of Killers is after Custer (again) and The Grail is up to no good (again) as the season ends.

I’m disappointed Arseface (and Hitler) have gotten very little screentime this year after escaping Hell and I can’t believe Jesse still hasn’t apologized or remotely thought about Eugene after sending him there a season ago.

Jesse’s got a tragic family tree tangled up with Gran’ma, who made a pact with Satan. It may have taken him longer than expected, but his vengeance felt well deserved. With Jesse, everything’s complicated. After all these years, he’s still chasing after her shadow, but hopefully next season, that will change. Tulip and Cassidy really are all the family he has, and Jesse has only pushed them away (as well as killed one of them).

On National Comic Book Day, I highly recommend watching the entire series (so far) of Preacher. It’s only three short seasons. If you haven’t caught up on all the madness of the series, you’ll be pleasantly surprised after binging them all. And if you could recommend the show to at least three of your friends, that would only help grow the show and guarantee at least one more season of gory (and somewhat holy) gloriousness.