Book vs. Movie: The House With a Clock in Its Walls

What’s the difference between the movie The House with a Clock in its Walls and the book that it’s based on? Many reviewers are praising this new movie as a fun and spooky movie that parents can see with their kids and still enjoy. But I haven’t been seeing many comparisons with the 1973 novel by John Bellairs. Fortunately, I’m here for you, dear readers.

Much like Goosebumps or Harry Potter, Clock is based off a series of juvenile fiction — so if this film does well, there could be sequels. While Goosebumps got many of my generation into scary stories and Harry Potter introduced its readers to the world of magic, Clock does both. Certainly, the book did for screenwriter/producer of this movie, Eric Kripke (Supernatural, Timeless), who was a fan of the book growing up.

I don’t know if veteran horror director Eli Roth (Hostel, Cabin Fever) grew up with the book, but according to a recent interview, he wanted to make a scary movie that kids could watch. “A lot of my friends have kids now and they want their kids to be into scary movies… this is like a gateway movie… it’s scary and it’s fun.”

It sounds like Roth is prepping a whole new generation to be fans of his movies when they grow up. At the very least, the younger viewers will receive an introduction into the world of horror films.

The younger fans of scary movies will already be familiar with actor Jack Black from the 2015 Goosebumps film.

At first I thought that Clock might have done better to be released in theaters closer to Halloween, but then I saw that Goosebumps 2 was coming out October 12th. It doesn’t matter, we’ve all seen the memes on social media of how people are anxious for Halloween to begin, so a September release is perfectly palatable. Also, with Fantastic Beasts not being released til November 16th, Clock is in theaters for those who want to watch a world of magic.

Speaking of the world of Harry Potter, if there’s a jovial bearded guy besides Hagrid who was going to tell you that you were going to be a wizard… I’d want that person to be Jack Black. He looks like the coolest uncle ever! I think he’s perfectly cast in the role of Uncle Jonathan. The color of Jonathan’s beard in the books might be red, streaked with white, but otherwise his features are pretty close — including Jonathan’s “pot belly.” Jack Black’s demeanor is also on point. He’s fun to be around, but is also caring and comforting toward his nephew, Lewis, who just lost his parents.

There are some smaller differences in Jonathan’s ensemble. He isn’t wearing a kimono when he picks up Lewis… or at any point during the first, or second book. He greets Lewis on the bus with smoking pipe in hand and a bunch of pipe cleaners sticking out of two of his four vest pockets. Between two of the pockets are strung a string of paperclips attached to a gold watch. This is a good way of showing that Jonathan is a practical man, but maybe not a man of means. Although it’s the 1950s and he owns a car and a large house, when they get there “Jonathan lifted the loop of the shoestring that held the gate shut.” Although Lewis calls the house a mansion, it is old and spooky. Because it was owned by another warlock previously, the book makes it sound like (maybe because of magic) regular folks were put off buying the place and Jonathan got a really good deal on it.

Jonathan’s neighbor, Mrs. Zimmerman, is his longtime friend. The two really do call each other names and like to nettle each other — as best friends are want to do. She is a widow and spends much of her time at Jonathan’s house. Cate Blanchette (The Hobbit, Thor: Ragnarok) was an excellent choice to play the character. I have no problem believing her to be a magic-user. Much like Hagrid from Harry Potter, she uses an umbrella for magic — except hers is purple and not pink. Just like myself, she loves the color purple, although she adds purple to all her home decor and her wardrobe. With her purple umbrella she fights a wizard’s duel in the book against antagonist Selena Izard… which we don’t actually get to see. Because everything is written from Lewis’s perspective, he’s out of harm’s way when the sparks really start to fly.

Selena Izard in the movie is played by Renee Elise Goldsberry (Altered Carbon, Hamilton). She’s the wife to the warlock Isaac Izard, who was the previous owner of the house. Isaac is played by Kyle MacLachlan (Twin Peaks, Dune); who we see in the trailer. I think he makes for a great villain, but as a kid, the first thing I saw him in was The Flintstones. I can’t speak to whether he’s accurate to the novel as he is only mentioned and doesn’t actually appear in the book. The main antagonist in the novel is actually his wife, Selena. 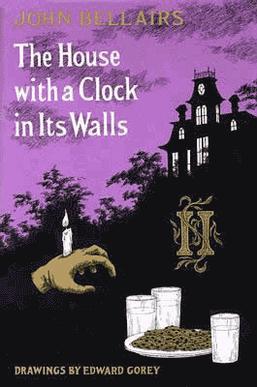 Isaac Izard’s return in the novel is more of a looming threat. It casts a shadow onto the story and the characters. Selena doesn’t even enter the book until about halfway through, during Halloween, no less. I’m glad to see that the movie added a bunch of pumpkins and also creepy dolls to fight. There’s no such fights in the book and the ending is kinda anti-climatic. I also didn’t appreciate in the book that although a Hand of Glory is part of the picture on the front cover, there is virtually no talk about it until the end. It’s kind of insulting to the readers, considering how big a part it plays in the novel’s final confrontation. It would be like if Harry Potter didn’t consistently try to find out the identity of Nicolas Flamel or Hermione Granger never read the passage about the Philosopher’s Stone. I hate when important stuff comes outta left field like that. Because I read and watch a lot of mysteries, I prefer that there be clues and I not be blindsided. But I suppose the main mystery is about the cock in the walls of the house. Where is it? What is it for? What does it do?

“Three gongs. Last time it was four. What happens when it gets down to one?”
“Nothing good, that’s for certain.”

I won’t spoil Isaac Izard’s master plan; you’ll have to read the book or watch the movie to find out. But, in the book, there are no gongs counting down. The clock just keeps ticking somewhere in the walls and protagonists spend the story trying to discover its source.

The last protagonist I have yet to talk about is Lewis. While I have nothing but praise for the cast of the grown-up actors in this feature, the child actors warrant some scrutiny. Physically, Lewis is a departure from his counterpart on page. His dress is different and he doesn’t wear goggles like he’s in a steampunk picture.

The other kids don’t make fun of Lewis because he’s weird, they make fun of him because he’s fat. This film had the opportunity feature a plus-sized actor in a starring role and they passed on the chance. This movie should be like if we were following Neville Longbottom, instead of Harry Potter. I understand that it can be difficult to find and cast child actors. However, while I grew up with The Goonies and Hook, we now live in an age where shows like Stranger Things exist and movies like Super 8, It and Deadpool 2. I guess what I’m saying is that you should be able to cast the right child actor in the right role.

Speaking of child actors and the right roles, I’d like to mention Rose Rita. She’s only mentioned at the end of the first book. In the second book in the series, that I just finished, The Figure in the Shadows, she is described as a tomboy who wears glasses and a beanie hat. She’s a bit taller and stronger than Lewis, and often gets into fights on his behalf. In the movie, she’s played by Vanessa Anne Williams. Because she has an important role in the second book, we’ll have to see what the filmmakers do with the character if there’s a sequel.

Aside from some of the casting, it’s good to see the filmmakers add their own flourish to a novel from the ’70s. While there are moving stained glass windows in the House with a Clock in Its Walls, I didn’t remember reading about a moving topiary or Lovecraftian monster with purple tentacles in the closet. Uncle Jonathan doesn’t throw fireballs from his hands and his trick of changing the playing cards is more subtle. But in a visual medium, you need to add more enchantment to watch on screen. The nighttime scene in the gardens is certainly more mesmerizing when the planets magically seem to come alive.

And we could all do with seeing a little magic on screen… at least until the next installment of Fantastic Beasts from the Wizarding World of Harry Potter.