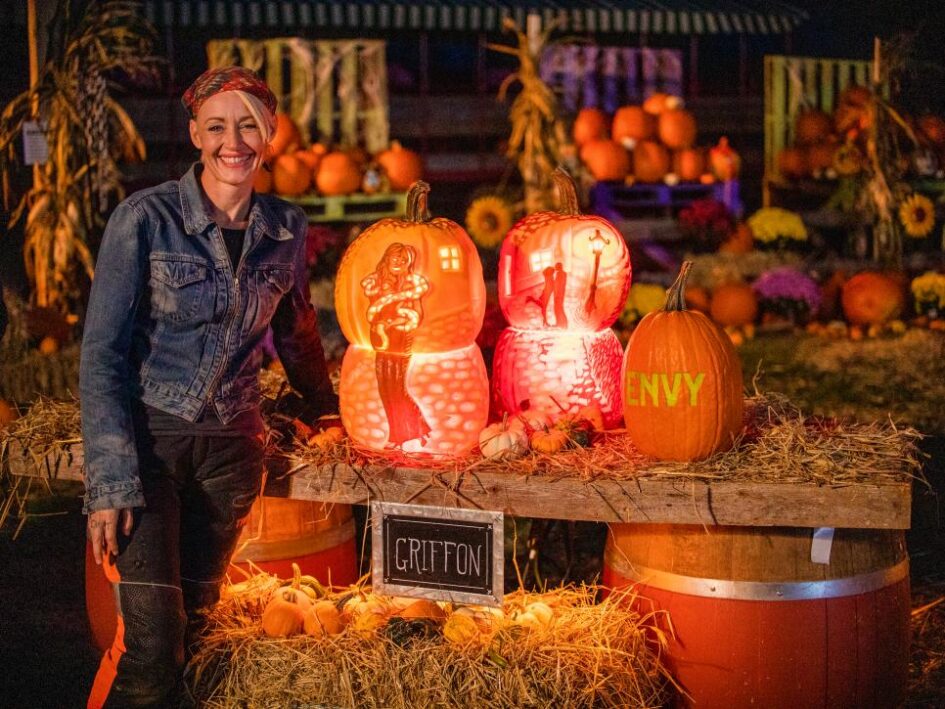 In the near future, looking back onto the year that was 2020 will be unforgettable for all the wrong reasons. With so many unfortunate events transpiring, celebrating Halloween during a global pandemic may not rank high on the list of importance, but it will make for a holiday season unlike any other. As so many haunted houses are being shuttered, movie theaters threaten bankruptcy and politicians recommend a cease-and-desist order for any sort of trick-or-treating with the hopes of containing COVID-19, it’ll be a miracle if the spookiest time of the year isn’t outright cancelled. Good thing the Food Network came up with Outrageous Pumpkins, which proves to be a good inspiration for all the haunters stuck at home, with plenty of time on their hands.

As a gameshow, Pumpkins incorporates a holiday horror theme to the food industry. Through only four episodes, it brings the title of Outrageous Pumpkins Champion and a $25,000 cash treat to the best of the seven competing expert pumpkin carvers. Hosted by Alyson Hannigan (better known for her work in the Buffyverse), judges Ray Villafane (the godfather of pumpkin carving) and Terri Harddin (Imagineer/pumpkin carver) must find the art in the details. Or is it the devil?

Among the contestants are an ice sculptor, a chainsaw artist, a high-school shop teacher, a vegetable sculptor, a special-effects person and a public relations director. With three females invited in the show, that’s technically less than half of the competitors, but in the grand scheme of things, it’s a big deal, as the pumpkin-carving industry is apparently dominated by males. Each of these very skilled artists will incorporate a variety of styles to be used with multiple utensils, including hammers, drills, vegetable peelers, melon ballers, scrubbing pads, clay tools, wire mesh, twine, kindling, power tools, superglue, dry ice, smoke bombs, fake blood, paint, PVC pipes, blowtorches, airbrushes and other vegetables… no tool is really off limits for this reality TV show!

The ultimate goal of this show is not just to highlight sculpting, but to accentuating the jack-o-lantern aspect of Halloween, using the pumpkin as a canvas to paint a three-dimensional picture. The competitors must take chances with their creativity and not waste any time during The Quick Carve and The Big Carve challenges. Speaking of competitors, gamers out there might recognize Griffon Ramsey, formerly of Rooster Teeth (and previously married to Geoff Ramsey). She’s quite creative (and her juggling skills are not too shabby).

“We’re all a little insane here…”

Limiting this new series to only four episodes was a calculated risk that should pay off handsomely for the network. While it premiered a little too early (half-way through September), I’m sure there will be PLENTY of replays that will air before All Hallow’s Eve. And pairing this new show with Halloween Wars and Halloween Baking Championship should give everyone at home some ideas to get into the spooky spirit.

Teaming up, Food Network and the Travel Channel will be premiering many Halloween-themed shows this month, which the latter is dubbing “Ghostober.” As we’re rather limited with the live events in which we can attend this year, we’ll do our best to spotlight the spooky! Stay tuned and stay safe out there!