Genndy Tartakovsky proves that visual storytelling can be an emotional experience in Season 1 of Primal.

Dialogue is overrated, right? When it comes to some filmmakers, they can’t have enough witty conversations, despite the depictions of their paper-thin characters. But when it comes to Genndy Tartakovsky’s skills, he can craft more emotion with practically no dialogue, whatsoever, than anyone else within the industry. And that is why his prehistoric animated adventure, Primal, won three Primetime Emmy Awards for the first half of the show’s initial season, recently.

Not to be confused with the Nicolas Cage live-action feature film of the same name (which was also released in 2019), Season 1 of Primal is self-described by Genndy as a character study through visual storytelling. In it, a caveman (nicknamed Spear, for the weapon which he bears), is decimated when his family is killed by group of hunting dinosaurs. Dealing with his internal struggles to find peace, he hopes to calm his trauma, while also keeping one eye open in the back of his head, as this prehistoric world is very, VERY violent. Spear strikes an unlikely alliance with a medium-sized T-rex (AKA Fang), who also has her babies eaten by a group of larger dinosaurs. Together, man and beast must learn to cohabitate, as they have a lot in common in terms of hunting and personality traits, eventually learning to work together, hoping to prevent their own extinction while fighting against common enemies.

Through no dialogue other than a variety of grunts and growls and quite a few slow moments, paired with some moody atmospheric music, great sound effects and gorgeous animation, Genndy layers simplistic storytelling with multiple details hidden inside. A range of emotions are expressed through only a few facial cues of the characters, including anger, frustration, revenge, sadness and even the consideration of suicide!?! Both human and beast continually re-live their nightmares every day in this less-civilized world.

Apparently, more than a few people recognized the merits of the show’s first half, with the second half of the season beginning on Oct. 4th. At the 2020 Primetime Emmy Awards, Primal won not one, not two, but three Outstanding Individual Achievements in Animation for Storyboard Artist (Genndy Tartakovsky), Art Director (Scott Wills) and Character Designer (Stephen DeStefano). That is an incredible trifecta coming out of only five half-hour-long episodes!

Tartakovsky, who previously brought Samurai Jack (Have We Actually Seen the Last of Samurai Jack?), Star Wars: Clone Wars and Dexter’s Laboratory to Cartoon Network, is waist-deep in oversized monsters (not to mention flying beasts and swimming monsters), blood and guts and prehistoric tragedy that’s really not suitable for children. This is truly a gory depiction of genre animation that adheres pretty tightly to the survival-horror subgenre, but the filmmakers involved have made it feel incredibly new. It’s a good thing Cartoon Network airs the episodes on its age-appropriate Adult Swim programming block.

In Primal‘s hunter vs. hunted world, much like in AMC’s The Walking Dead, the laws of physics sometimes take a backseat to storytelling, as skulls are sometimes too easily crushed or ripped apart (but it definitely looks cool), or the main character may leap hundreds of feet into the air that just isn’t remotely possible. Thunder and lightning are used as effective storytelling tools and a familiar voice actor makes an appearance or two (Tom Kenny). 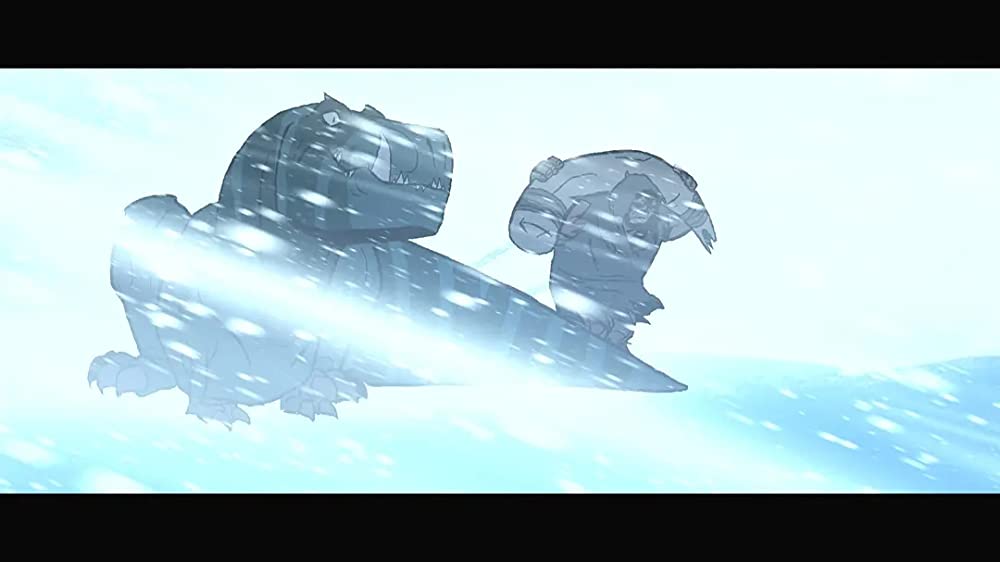 “A Cold Death” was probably my favorite episode of Primal’s first five episodes in Season 1.

Genndy doesn’t crank out a ton of work each year and I keep forgetting how much I truly enjoy and appreciate his work. As a HUGE fan of his Clone Wars and Samurai Jack, I can’t get enough of his quality craft. While it is a violent, bloody series so far that brings about horror elements of Shark Week to mind, there are some incredible creatures scattered throughout, including a pack of wooly mammoths, bat-like creatures and a monstrous spider that would make Shelob wince in terror. At one point, I was even expecting Spear to control his enemies with ropes, mimicking Pickle Rick. I did really enjoy the fifth episode, “Rage of the Ape-Men,” which introduced some sort of tribal council/Thunderdome that could have taken notes from Thor: Ragnarok. As it concludes, Spear’s only friend/foe appears to be dead… but surely this is only a cliffhanger ending?

I kept expecting Spear to eventually discover more of his kind in each episode, but that never happened. Maybe that’s what’s in store for the last half of the season? That could be a great twist.

New episodes will air on Cartoon Network’s Adult Swim late-night block beginning on Oct. 4th with “Plague of Madness.” These next five episodes should hopefully go out with a bang for the series, which has already been renewed for a second season of 10 episodes, that will air next year.