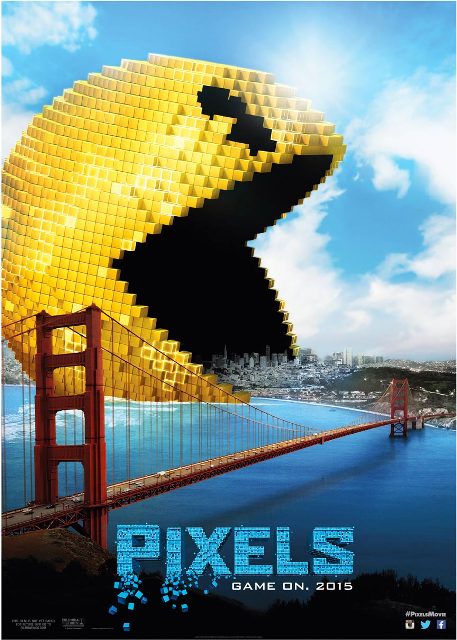 Per Matt
What if NASA sent a message of peace into space, only to be misconstrued as a sign of war by extraterrestrials?

That’s basically the storyline to Pixels, but let’s not focus on the details and get to the heart of the action (much like director Chris Columbus did with this movie). These aliens use classic arcade games as the basis for attacking Earth, which means childhood friends and former video game champions Sam Brenner (Adam Sandler), Eddie Plant (Peter Dinklage) and Ludlow Lamonsoff (Josh Gad) are recruited by President Will Cooper (Kevin James) to defeat the enemies. Will this be Game Over for humanity?

The movie is goofy and there’s plot holes galore, but let’s be real: It’s an Adam Sandler movie. What else are you expecting? Pixels has great nostalgia value for old-school gamers, with Centipede, Galaga, Space Invaders, Arkanoid and Tetris featured prominently throughout the movie, but it’s Pac-Man who steals the show. Much like a recent Bud Light commercial, the reenactment of the ground-breaking video game proved to be the best of the bunch. Toru Iwatani, the creator of Pac-Man, even gets a tip of the hat, in a funny scene. Donkey Kong is featured as the Boss Battle, but pales in comparison.

There’s decent acting by the ensemble, as a whole — with the exception of the illegible and mulleted Peter Dinklage — with Michelle Monaghan a great addition to Sandler’s crew. Be on the lookout for a quick Dan Patrick cameo, as well as a funny gag involving Serena Williams and Martha Stewart, of all people.

While this movie sings the praise of geeks; it’s simultaneously making fun of them. Josh Gad’s Ludlow Lamonsoff is the worst offender, who’s a conspiracy theorist living in his mother’s basement.

The old-school gamer in me enjoyed the movie; although Futurama did it better.

Strength: It’s a throwback to classic video-game culture.
Weakness: Skimpy storyline with stereotypical characters.
WTF Moment: Q*bert doesn’t speak English in his video game. How, or better yet, why Q-Bert speaks English, as well as transform into another character, is beyond me.