Previewing the Half Christmas Beer Fest 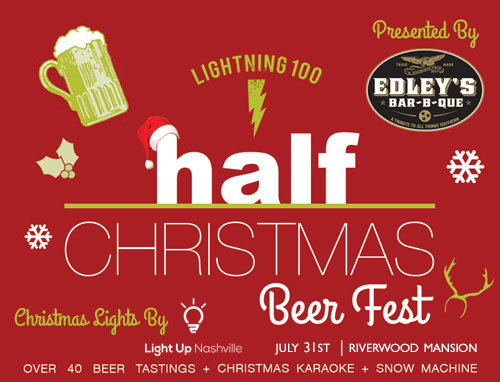 Per Matt
It’s time to get festive, the Half Christmas Beer Fest is almost upon us!

Sponsored by Nashville’s independent radio station, Lightning 100, this event will take place on July 31st from 6 – 10 pm at Riverwood Mansion and hopes to spark some holiday cheer, along with promoting some great craft beer.

Admission includes entry into the beer festival, an 8 oz souvenir glass, unlimited craft-beer tastings and holiday cheer! Make sure to bring your holiday cosplay, prepare to dance to the tunes of the radio station’s DJs, enjoy the snow machine and sing a song during late-night Christmas karaoke.

Previewing the event, Brian J. Waters discusses what we can expect at the Half Christmas Beer Fest.

What is your official role with the event?
– “Senior Elf/Producer.”

How did the Half Christmas Beer Fest get started?
– “Have you ever seen that episode of Workaholics, where they failed to make Half Christmas a legal holiday at their office? Well, it didn’t work when I tried it at Lightning 100 either, so I pitched it as a beer festival. We had the first Half Christmas at Morgan Park in Germantown in 2014. We teamed up with our friends at Riverwood Mansion this year to truly create Christmas in July.”

What can I expect for the Half Christmas Beer Fest as a first-time attendee?
– “Imagine a winter wonderland in July, where people brave the heat for the promise of tasty beverages. The festival will contain crowds of people in Santa costumes, elf ears, cut-off tacky sweaters and Mrs. Claus attire. We will have some special holiday DJ sets from Lightning 100, followed by late-night karaoke.”

This is the second year for the festival. What’s new for 2015?
– “We will have some costume contests for best Santa, Mrs. Claus and original character. We are really excited about having it at Riverwood Mansion and having the professional lightning done by Light Up Nashville. Just imagine the moment when Clark Griswold lights up his home, so much that airplanes can see his house. Everyone will know where East Nashville is that night. We are also hoping for another appearance by Santa, from Santa’s Pub again this year.” 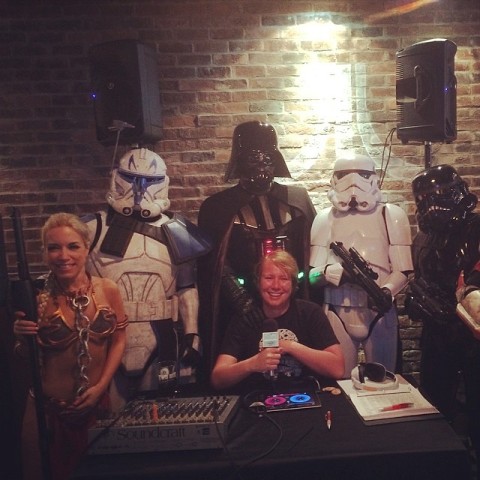 How were the featured breweries chosen for this event?
– “The featured breweries are ones that will have staff members and the brewers attending. Got a question about your favorite beer? Ask the guys that make it. We have also worked several events with them at Lightning 100 and Live On the Green Music Festival.”

Will there be any Christmas-related beers served to guests?
– “It’s very hard to get breweries to provide their winter seasonal beers in July. Figures crossed for next year.”

Is this an inside or outside event?
– “Both. We can fit everyone inside, but if the weather is nice, we will be moving out some of the beer tents outside, to make plenty of space for everyone.”

Do you have any costume recommendations?
– “Everyone wants to be Santa or Mrs. Claus. We had a few good elves and reindeer last year. No one was cousin Eddie, the guys from Workaholics, Ernest, Frosty or even Mr. Heat Miser. Challenge ON!”

How is Lightning 100 involved with this festival?
– “Lightning 100 is producing the festival! Come party with your favorite independent radio station.”

Will Lightning 100 DJs be participating in the festival? If so, who will be attending?
– “Looks like we will get DJ sets from Lt. Dan and Brian the Web Guy. We are working on a few other special guest East Nashville DJs.”