Game of Thrones: Episode Five — A Nest of Vipers 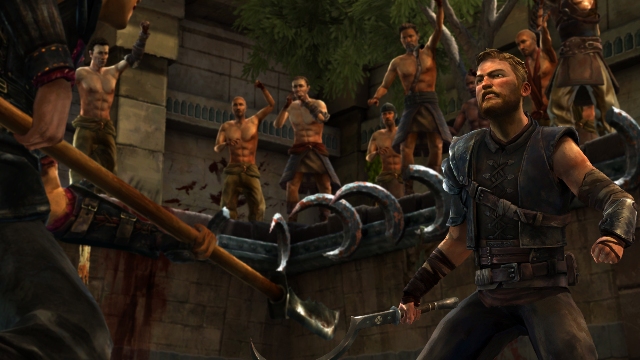 House Forrester has declared war on multiple fronts! There is an internal struggle as a traitor is exposed, as well as evil external forces that threaten the very existence of the entire family tree in Game of Thrones: Episode Five — A Nest of Vipers.

As this episodic point-and-click adventure game begins, Player 1 follows the splintering shambles of House Forrester:
– The hobbled Rodrik tirelessly tries to hold his family together
– Asher deals with Beskha, Mereen and his return from exile
– Sera has caused a controversy after making a scene at the coronation feast
– Gared must deal with his friends bailing on him after abandoning Castle Black

Episode Five continues the sad state of affairs of this family. So far, each episode is dreary, negative and downtrodden. I’ve got to say, it’s been tough to get through this series since all the main characters keep getting killed off. Once you get a vested interest in them, they’re gone.

With that being said, allies are hard to come by for this family, especially with Lord Ramsay slowly killing them all off. After Asher and his crew risk their lives to free Meereen, Daenerys Targaryen denies the use of her Second Sons, instead, providing them a bounty of gold. But before Asher can recruit a crew of pitfighters, he must first defeat Bloodsong (who’s never lost before) in order to gain their respect (and hopefully hire them to fight for his family).

North of the Wall, many dangerous threats that await Sylvi, Cotter, Finn and Gared — many of which I look forward to witnessing — but it’s the Army of the Dead that arrives first. Back at Ironwood, the family traitor is revealed, and sadly, it is Duncan. Asher and his army are ambushed after arriving ashore and the episode ends with a mighty cliffhanger.

Is it remotely possible for this family drama to end with a “Happily, ever after?”

Throughout five episodes of this series, following Asher’s storyline has remained the most enjoyable. All the other primary characters range from annoying to acceptable. In fact, if there was one original character to crossover from the Game of Thrones video-game franchise to the TV series, it could easily be the tag team of Asher and Beskha. Both of these anti-heroes are easy to root for and fun to watch.

All of the achievements and trophies are story related. None are missable.

There was quite a bit of action within this episode, along with many deaths… but never really any dull points. Ramping up the showdown for Episode Six, there’s sure to be more than a few fireworks blowing up by season’s end. And if choosing to sacrifice Rodrick proved to be difficult in this episode, there’s no telling what difficult decisions will be made in the next episode.

Strength: Asher and Beskha are the best characters of the bunch, so far.
Weakness: Sadly, not all of the main characters are enjoyable.
WTF Moment: With so many House Forrester allies being methodically killed off, it’s bad business to be a friend of the family.