Plague of the Dead: The Morningstar Strain 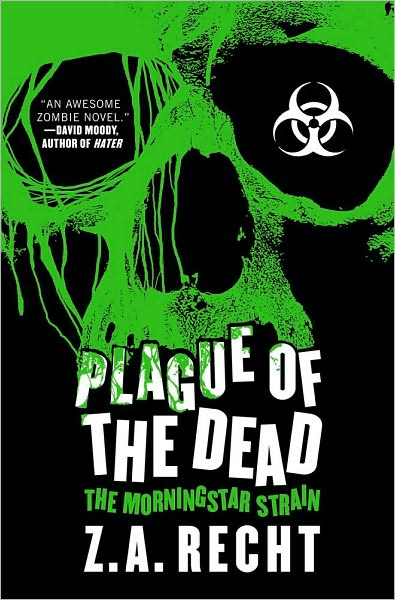 “Odd how tragedy, death and violence brought out the honor in people.”

Spoken like a true soldier, fighting for survival in an undead world. That may have been a throw-away line near the conclusion of the book, but trust me, there’s plenty of tragedy, death and violence in Plague of the Dead: The Morningstar Strain.

When the United States Army tests the complex Morningstar virus — which creates pain and nausea in its mammal hosts, then tissue deterioration and is transmitted via bites — an accidental escape of a test subject puts the entire world on notice for a viral outbreak that can quickly decimate the entire planet’s population.

At the eye of this storm is Lt. Col. Anna Demilio, a virologist working for the U.S. Army Medical Research Institute of Infectious Disease (USAMRIID), who has been researching the virus up until the outbreak. As per many disaster movies, she’s the only person who foresaw the upcoming outbreak and was ignored when she tried to preemptively contain it. But when she leaks classified information to D.C. newswoman Julie Ortiz in hopes of warning people before it’s too late, both are quickly imprisoned and tortured, in hopes of preventing nationwide civil unrest.

Flipping the script, author Z. A. Recht then focuses attention on the frontlines of the battle. Lieutenant General Francis Sherman is a military lifer and takes the undead threat personally. Sherman is continuously haunted by risking the lives of many to save the few and cares deeply about his soldiers. After unsuccessfully cordoning off Africa from the Middle East by blowing up bridges near the Suez Canal, the infected somehow break through the stronghold and threaten the rest of the world.

Morningstar is transmitted via contaminated blood or bites. Most of the infected carriers are “living victims” and have different levels of intelligence, depending on how they were infected. The slower carriers are considered shamblers (the reanimated dead) and the faster ones are known as sprinters (technically still alive, yet to reanimate).

Throughout the many battles with the undead, General Sherman’s soldiers rescue survivors from all over the world, creating an internationally diverse group, which creates humor and tension at all the wrong times. Back in America, a rogue NSA agent frees Demilio and Ortiz and all are hunted down by both the government and the undead. It’s a race against time for humanity’s survival and Plague of the Dead is easy to envision as a haunting disaster movie.

Destruction and wildfires plague many of the major cities, slowly burning away the past to form a grimmer present and even darker tomorrow. It’s easy to feel the desperation and hopelessness of Recht’s characters. Speaking of characters, several have similar names that often get confusing (Darin, Dewon, Denton and Decker). Through all his trials and tribulations, grizzled war veteran General Sherman is the most likable of the bunch. Even though his world may be falling apart around him, he’s continually impressed with the can-do spirit of the survivors, when times are tough. This is when the light shines brightest on the general. With his battlefield techniques and Demilio’s medical knowledge, together, they might just save the entire planet’s population and put an end to this undead uprising.

The conclusion lays out an undead ambush in a small West Coast town, firmly laying the groundwork for the next book, Thunder and Ashes. Author Z.A. Recht has created a masterpiece with his Morningstar Saga, as his trilogy of Zombie books is known. In looking up information about the author, it seems Recht was a former soldier in the U.S. Army, making his storylines feel authentic. I am saddened to report that Zachary Allen Recht passed away in 2009, meaning this trilogy of books will be his oeuvre. Plague of the Dead is definitely one of the best Zombie books I’ve ever read.

Strength: Diverse and believable characters and storylines.
Weakness: The human antagonist predictably survives to returns in the next book.
WTF Moment: Each chapter title is a gruesome-but-fun destruction descriptor.

Notable Quotes:
– “There’s a hellstorm headed this way.”
– “Epidemics on this scale are rarely predictable.”
– “Their screams were drowned out by the roars of the rage-filled infected.”
– “What the razor wire began, the rounds from the soldiers’ rifles finished.”
– “So we’re nothing but close-range snacks for those walking pus-bags out there?”
– “We don’t use sci-fi terms. We prefer to call him a deceased ambulatory viral host.”
– “When you finally know the truth, the temptation to keep it secret starts to nag at you.”
– “We’d be going out into that war zone with one big-ass knife and a couple of sporks to fight with.”