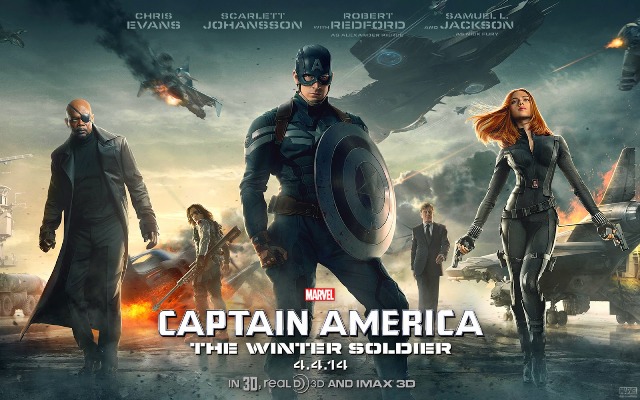 Per Matt
The Marvel Cinematic Universe keeps expanding, getting bigger and better!

As an enthusiastic fan of the big-screen treatments Marvel has created with each of their properties (full disclosure: I’ve only seen bits and pieces of The Incredible Hulk), I was most excited to follow along the further adventures of Steve Rogers. As a fan of alternate-history movies, Captain America: The First Avenger was my favorite of all previous Marvel movies. Co-directors Anthony and Joe Russo blew my expectations away with this modern-day fish-out-of-water tale.

While Iron Man bravely set the tone for all Marvel movies and The Avengers was an enjoyable popcorn flick, The Winter Soldier sets itself apart by developing an espionage story for superheroes. If you could imagine the TV show, 24, filled with comic-book characters, that doesn’t begin to describe the situation of double-crosses, moles and nonstop action provided in The Winter Soldier.

Picking up the pieces after The Battle of New York from The Avengers, Steve Rogers is still struggling to fit in with the 21st century. Cap still doesn’t know who he can trust in this brave new world. An assassination attempt on Director Nick Fury removes him from S.H.I.E.L.D. after he opposes Project Insight’s launching of three Helicarriers designed to take out all current and future terrorists. With Fury out of the way, HYDRA moles reveal their true intentions. S.H.I.E.L.D. has fallen and basically all the heroes on the run.

Can Captain America thwart this terrorist threat before it’s too late?

Captain America: The Winter Soldier has absolutely raised the bar for all future comic-based movies. Other than The Avengers, all previous Marvel Studios films have basically featured one character. The Winter Soldier is truly an ensemble picture. Nick Fury and Black Widow finally get a chance to be highlighted in the ninth Marvel film.

Samuel L. Jackson’s Fury has the most screen time from any previous MCU film and Scarlet Johanssen shines with each of her close-ups, proving her character is more than just a pretty face. Actually, her character is closer to being Cap’s than anyone else. Even though he plays the titular villain, Sebastian Stan’s Winter Soldier doesn’t have much dialogue to speak of, often letting his actions speak louder than words.

Preparing for this movie, I had to watch eight previous episodes of Marvel’s Agents of S.H.I.E.L.D. so I’d be all caught up. Fallout from The Winter Soldier feeds into the TV series, in a great case of interweaving storylines. And with Hydra’s first public appearance of the 21st century, I expect to see more of its agents in upcoming MCU projects, including the upcoming Avengers: Age of Ultron, Guardians of the Galaxy and more episodes of S.H.I.E.L.D.

With the future of S.H.I.E.L.D. uncertain, Marvel’s upcoming films should be even more exciting and full of adventure. I can’t wait to see what happens next for the superheroes on the big screen.