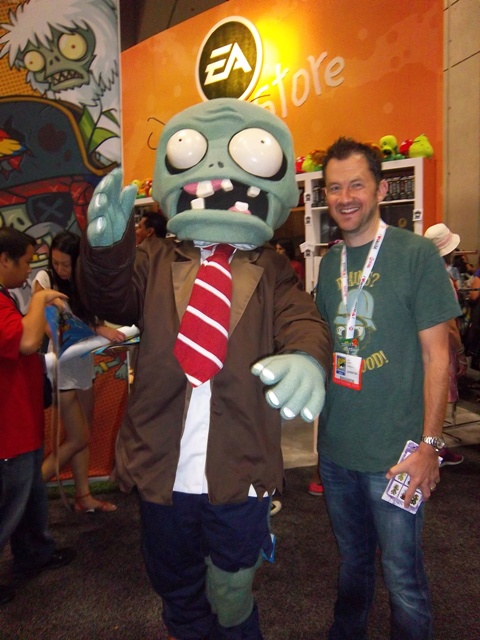 Per Matt
As the Franchise Business Director, Tony Leamer has helped guide Plants Vs. Zombies, as a franchise, for the past two years. Recently, at San Diego Comic-Con 2013, the Plants Vs. Zombies booth had a huge presence, including a photo-op with a PopCap Zombie, exclusive merchandise and plenty of convention freebies. I spoke with Mr. Leamer to discusses the upcoming PvZ sequel that will be distributed for free, EA’s involvement with PopCap and an upcoming third-person shooter based in the same universe.

What is the status for Plants Vs. Zombies 2?
– “We’re currently testing in Australia and New Zealand only and other territories to come very soon.

Will the game model be based on purchasing microtransactions?
– “There will be transactions in the game. There’s a huge amount of gameplay for free. The way we designed the game is to be a great experience… that happens to be free. So, there’s no pay barrier to get in and to have fun with the game. You’ll be able to play and earn almost every single thing in the game, but you could also purchase items, as well. In terms of purchasable items, there are some specific plants you’ll be able to buy. You can either earn keys to access challenge levels, for example, or you can purchase your way through those gates, to access additional content. The core game is free. There’s a massive amount of free gameplay.”

Will players be able to complete the entire game for free?
– “Yes. You can complete the whole game for free. There’s a very small amount of content and only in the form of premium plants, that you can’t earn by playing the game. Everything else you can earn. It’s not pay to win. If you’re good, you play a lot and you can earn your way through, then you’ll be able to play all that stuff. Like I said, the only thing you can’t access in PvZ2, any other way, other than purchase, is a handful of premium plants.”

Was there any fan feedback you may have implemented into the sequel?
– “We know how much people love the game and the franchise, so we wanted to remain true to what the game is all about, which is, first of all: Plants fighting Zombies. But also, we wanted to make it funny. We wanted to do stuff that makes us laugh and we think is going to make other people laugh. That’s really important. We wanted to make it accessible. We wanted to make sure that anything we do — whether it’s Plants Vs. Zombies 2, Plants Vs. Zombies Adventures or Garden Warfare — has that quirky sense of humor that embodies the franchise, but also is accessible, so you can pick it up and have fun right away. It also needs to have depth. It needs to be something that you want to come back and continue to play, continue to enjoy and discover new elements. Those are the things we really kept in mind.”

Will Plants Vs. Zombies 2 have DLC?
– “Yeah. It’s very much a living service. We will be adding new content, which will be free as well. In Plants Vs. Zombies 2, the theme is time travel, so the game will launch with three worlds. We’ll be adding new worlds, new plants, new Zombies, new content very frequently. So, there’s always new stuff to discover and come back to.”

Will Plants Vs. Zombies 2 be available for all platforms?
– “Initially, it will be released on IOS and other platforms to follow.”

What’s the release date?
– “Plants Vs. Zombies 2 will be out this summer. We haven’t said exactly what that date is, but middle of summer… so, you can probably figure it out.”

Can you tell me a little about Garden Warfare?
– “Garden Warfare is a totally different game. It’s a third-person action title set in the world of Plants Vs. Zombies. Again, that same sort of humor, accessibility and depth, but in a third party full-on multiplayer console action title, built upon the Frostbite 3 engine. It’s super robust, super credible, but yet super hilarious, fun and accessible.”

Who are the playable characters in Garden Warfare?
– “You’ll be able to play as either plants or Zombies. 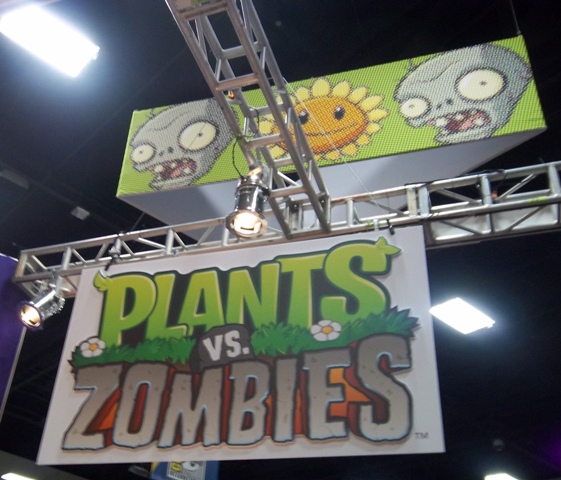 Were both of these games the product of Electronic Arts’ buyout of PopCap?
– “Plants Vs. Zombies 2 has been in the works for a long time, hence our tagline: It’s About Time. We’ve been working on this one for a while, since way before the EA acquisition. We’ve been thinking about it and we tried a lot of different directions for it. We have a saying at PopCap, ‘It’s done when it’s fun.’ That’s why the game is taking so long. We’re really happy with how it’s coming out.”

“Garden Warfare, actually, is one of the things EA encouraged us to sort of think bigger and differently about PvZ, but still in that same ethos that made PvZ an amazing experience that’s so broadly accessible and interesting. When we started thinking about that, we started looking at different genres that might translate well for Plants Vs. Zombies, we really came into that action genre as one. Obviously, there’s a massive audience for it, but it fits the Plants Vs. Zombies character sets really well. If you think about the Sunflower: a great healing-class character; the Peashooter: your infantry guy. When the team was coming up with the initial designs, it really fits in an amazing way.”

Has the EA acquisition changed development in any way?
– “No, not really. EA bought PopCap because PopCap is really good at what PopCap does. They want us to continue making great games in the way that we’ve made them. I think we now have the resources of a much bigger company, which has actually been really great, in terms of the ability to do things like having a big presence at Comic-Con and to get the word out to a much broader audience, EA has been incredibly helpful in that.”

What’s PopCap’s upcoming schedule?
– “We’ll be at gamescom in Germany in a few weeks and then PAX, of course, back in Seattle. PopCap will have a nice presence at PAX and do some fun stuff there.” 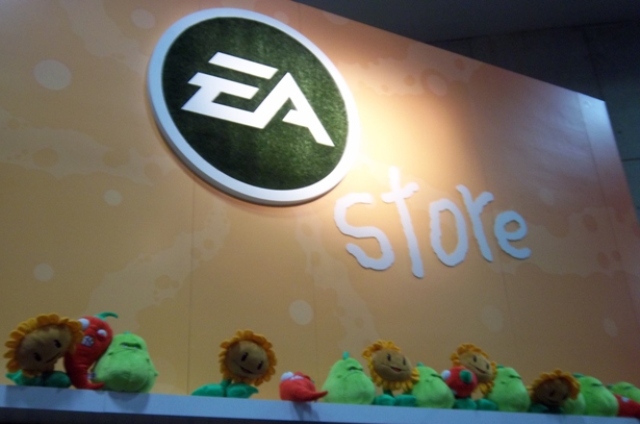