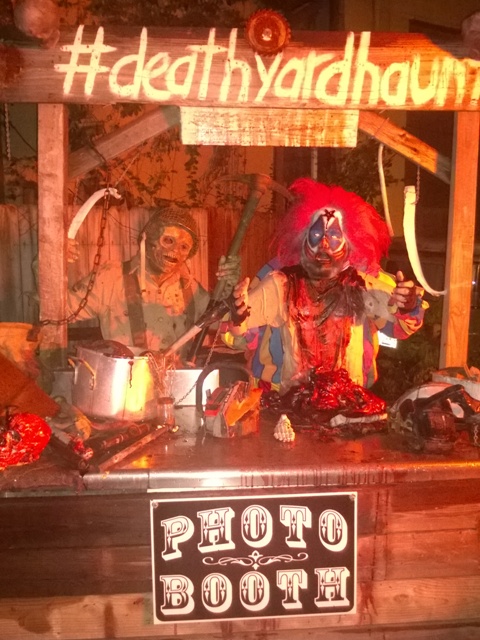 Per Matt
There’s a good possibility that Death Yard Haunted Attraction is actually haunted in real life… but there’s only one way to find out!

Recently, I visited Death Yard and had a blast at the haunted attraction. Not knowing what to expect, I joined a group to help me survive, before getting a shock to my system. I was immediately separated from them at the beginning of the experience and spent the entire time fumbling around in the dark by myself, freaking out the entire time. Apparently, walking down a separate corridor from your group can happen to customers at any time. Don’t expect to be shielded by your friends for the duration of the haunt, because you, too, might find yourself alone in the dark, like I did.

After experiencing the terror of Death Yard, I visited with Death Yard Co-Owner Carroll Moore, who updated me with the details of this year’s haunt:

What’s new for Death Yard in 2015?
– “The whole show is pretty much new. We’ve revamped everything. The horror facility has some new spirits and entities inside it. We have a wandering sister, which is an undead nun, walking around. We’ve got Gutso the Clown outside. We have a World War II soldier searching for Nazi scum outside. Inside, we’ve got a lot of cool, new things as well. I don’t want to give those away,unnecessarily.”

What’s the storyline behind the haunt this year?
– “We have this horror facility, where we house different spirits’ entities and we put them on display for mortals to witness. So, each scene is a different tormented spirit. You get to see their horrific past. Each year we can put in or take out new spirits. It’s actually weird, because we’re getting what we call ‘haunt porn,’ which are antique props. The more we bring it in, the crazier things are happening in the haunted house. The spirits that are traveling with these objects are actually really coming to life. It started off as just a theme for a haunted house, but it’s actually becoming real. We’ve heard a lot of noises and had some strange occurrences.”

Are you saying the place is haunted?
– “I think so. It’s getting to that point. I thought it was just an old building, but some things have happened the past few weeks that have been blowing my mind. We’ve heard footsteps, we’ve had doors opening and closing and music turning itself on… just weird things and the feeling of dread in some spots. I’m in there all the time, but when I’m working by myself, I get this weird feeling. Either this is really scary looking or something’s really in there.”

Have you considered bringing in some ghost hunters?
– “We have. We had the Tennessee Wraith Chasers in there, last year. They didn’t get to do any paranormal investigating, but they came out to meet some fans. We talked about inviting them for a legitimate investigation. We’ll see. We had the haunt cams up for a while and they picked up some orbs. After this season, we’re going to try to find what’s in there.” 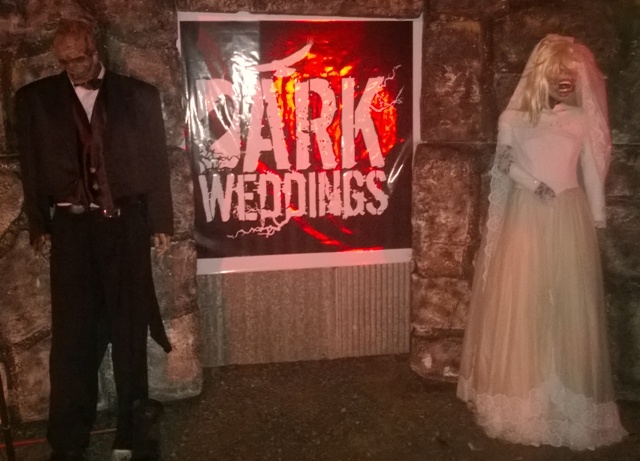 Do you know the history behind this building?
– “They used to build pre-manufactured homes here. I know there’s been a couple of fires on the property, but I don’t know if anyone’s passed away here.”

What can attendees expect from the haunt this year?
– “Expect more realism, the sets are a lot bigger, there’s more actors this year, with 40 to 45 actors within a 10,000 square foot attraction. We’re really trying to bring a different level of attraction to Nashville that’s unique and we’re really enjoying that. We have a different style that’s gritty, grimy, less fantasy and more realistic and people tend to like that. It’s definitely a longer experience than last year. We’ve added a little bit more outdoors and we are really utilizing the space inside the building and keeping people inside there as long as we can, to give them a great, quality show.”

What days will Death Yard be open?
– “We’re open from 8 P.M. to 12 A.M. every Friday and Saturday night in October. We’re also going to be open on Thursday, October 29th.”

Your company is also hosting other types of events throughout the year. Please tell me about them.
– “We’re doing Dark Weddings, which is an elopement-style wedding ceremony. People are actually getting married here on Halloween morning. We’re also doing photo-shoots, music video shoots and an art show in the next couple of weeks with Mickey Masters.”

What’s happening with this year’s Haunt Pink Awareness program?
– “This is our third year for doing the Haunt Pink Awareness breast-cancer campaign. We pick a different recipient every year. This year’s recipient is Tonya Jones. We’re trying to raise a lot of money for her. Hopefully, we’ll bring in the most money, this year, because it’s really cool to see how we can help an individual. People can make donations at the emporium — which is our gift shop — or buy a t-shirt for $20 and we make sure 100 percent goes to her. We also have those for sale at Nashville Nightmare, as well. They’re actually a sponsor, helping us out, this year.”

Is there anything else you’d like to add?
– “We’re just doing different things and that’s what will separate us from everyone else. Hopefully, we can keep trending up. The public wants something fresh and new. We’re thinking about doing some behind-the-scenes tours. Our makeup FX guy, Matt Scott, of Von Grimm Productions, actually held a sock-mask makeup tutorial class a couple weeks ago. We’re going to do more of that, maybe do movie nights for the people who download the free mobile app. We love Death Yard Nation — that’s what we call our fans. We want them to come out, enjoy the attraction and spread the word.”

“Everybody who helps out with this place, from the staff to the actors to the sponsors… Death Yard couldn’t happen without all of them. I’d like to shoot out a sponsor shout-out to: South on Demonbreun Hill, Chocolate F/X, Jolly Ollie’s Pizza & Pub, Montgomery Tree Service, 3D Printing Egg and SFXSI Design. We’re very happy with the crew we have and seeing people show up and leaving happy and excited is awesome.”