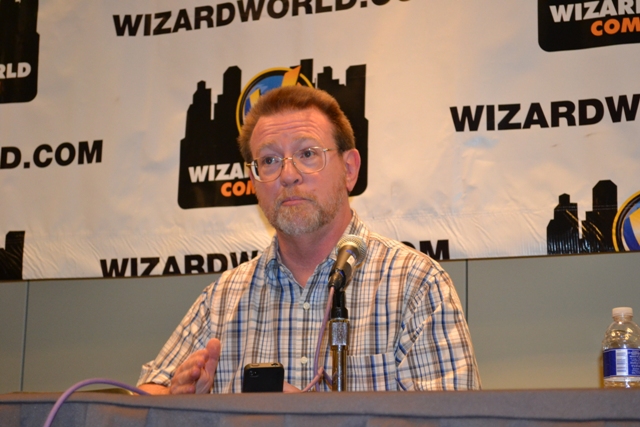 Per Matt
Recognized as one of the best in the superhero and Zombie realms, it may be shocking to reveal that Michael Golden is not a big fan of either comic-book genre.

At Wizard World Comic Con Nashville, we spoke with the writer-artist to discuss his background, working with Larry Hama, his upcoming work with The Micronauts franchise, as well as his interesting connection to The Walking Dead.

Is this your first visit to Nashville?
– “No. I have been here many times. In fact, I was here with the first Wizard show, as well. I’ve been coming here ever since.”

How did you get your start in the comic-book industry?
– “Originally, I was a commercial artist and I am still a commercial graphic designer. In the mid ’70s, I started doing American comic books and very quickly realized I couldn’t make a living at it. I went back to doing commercial work and that’s how I’ve been functioning, ever since. I go back and forth. I love to do comic books and graphic-narrative-oriented material, because I do love to tell stories. I found out that’s my one gift in life — It’s not that I’m an artist. I try real hard at it, but that’s just it: I have to try at it. I never had any trouble telling stories, just ask my mom. She always called me a great little liar.”

What are some of your influences, as an artist and a writer?
– “I would not point a finger at anything in particular. I have my favorites, but I don’t know that they influenced me in any particular way. I tend to draw my references as I need them, on a particular job. Again, I’m a commercial artist. That’s the way I think. If I need something, if I’m stuck, then I will find a way to solve it, by virtue of looking how others have addressed the issues. Does it have any influence on me, after that? Sometimes. Sometimes not.”

I’m guessing you enjoyed comic books while you were growing up?
– “No. Actually, where I grew up, comic books were hard to come by. My mother would buy big boxes of Disney and Archie comics from the Salvation Army, just to keep us quiet on long trips. That was basically it. I don’t remember seeing a superhero comic until just shortly before I came into the industry. I’m not a superhero fan. Never have been.”

Please explain.
– “The concept of superheroes kind of eludes me, even though I’m considered one of the best superhero artists in the business. It’s because I have to think about it; I have to realize what I’m doing. I don’t bring any kind of baggage or prejudices or preconceptions to the table. I learn what makes Batman, Batman; I learn what makes Spider-Man, Spider-Man; but I’ve never really been a fan of any of it.” 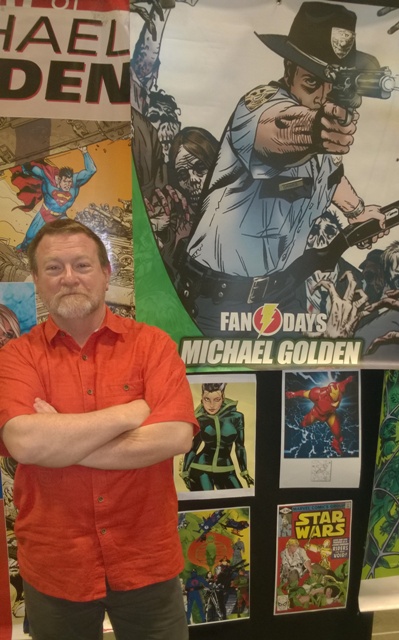 Can you tell me a little about your experience working with Larry Hama?
– “Larry and I have had a long relationship, since I first came into the industry. He’s a great guy and he’s been a great friend. We are associated on a lot of projects, including Bucky O’Hare and the Hasbro properties. We both think of storytelling in the same context and whenever we’ve had the opportunity to work together — like on the G.I. Joe properties — we do it.”

Can you tell me a little about working on The Micronauts franchise?
– “I became attached to the Micronauts project after DC imploded in the late ’70s. They cancelled a lot of books and they fired a lot of people and they let a lot of creative talent go, because they had to restructure. They didn’t go bankrupt, but it was close enough. I was one of the guys who was looking for work, even though I was already moving back toward doing commercial work. In the meantime, Marvel made it very clear that they wanted me working for them. I’d already done a lot of work with them, but they wanted me full time. They also knew I wasn’t a big superhero fan, so they told me about Micronauts, which was a science-fiction adventure. I’ll do science fiction. I don’t have a problem with that. I left DC and went over to Marvel, because they offered me $10 more per page — that means $28 per page — and that led to ongoing work for Marvel, whenever I had the time, for the next 20 years.”

You’re also working on the upcoming Micronauts toy line, as well.
– “Well, yes. My association with Hasbro is ongoing, as it always has been. I think I am going to be doing some ancillary Micronauts stuff with some publishers. My agent mentioned it, but I’m not sure where that’s going and I’ve gotten word through the grapevine that J.J. Abrams — who has the Micronauts movie rights — and his Bad Robot art department would love to have me onboard. I’ve told them, up to this point, that I’m not interested. The reason is because J.J. Abrams makes a damn good movie without somebody else’s baggage being attached. So, if my name were intrinsically attached to a production, my fans and fans of the original Micronauts would have certain expectations and that never works to any property’s benefit… ever. It would be great if they just went in and did it themselves. Hasbro’s got some great talent attached to it. They can do the job.”

Please tell me how you began working for The Walking Dead.
– “Well, I’ve said many times publicly that I’ve never been a horror fan. The whole Zombie craze eluded me. It still does, actually. I’m not quite certain why people would be into that. It’s a little gruesome, as far as I’m concerned and it never occurred to me to be attached to it. Bob Kirkman, who created The Walking Dead, has told me, in no uncertain terms, that he’s a big fan of my comic books. He grew up reading my comic books. I was the first artist to do the first variant for the Wizard shows. From then on, it just sort of snowballed from there.”

“AMC called me up and I’ve done presentation art that was on the Talking Dead show and I’ve done a whole bunch of variant covers. In fact, I’m the only artist who’s done two variant covers for Wizard. I am, in fact, the official Walking Dead artist at the Wizard shows. The actors, like Norman Reedus, Michael Rooker and Scott Wilson — they all know me. We’ve all gone out drinking or out to dinner together and they’ll sign my work whenever people buy it and ask them for autographs. It’s been a fun little gig, because just like with superheroes, I’ve had to learn what people expect and want to see, even though I may not understand the emotional content. Again, in a professional context, it’s been a real challenge, but a satisfying challenge in the sense that the checks have not bounced, yet.”

Surely, it’s been an honor to have done so many of the covers.
– “Well, there’s plenty of guys who have done the variant covers, so I don’t want to roll over their thunder. Some of them are really, really good. I’m the only one who has done two of them and I have done a bunch of variants for Gentle Giant. Everyone seems to be very happy with them, so that’s satisfying.”

What events will you be attending next?
– “I think I’m doing the rest of the Wizard shows, until the end of the year. I’ll be in New York City at the Javits Center and probably a couple of others in between. I think we’re doing Cancun this year, too.”