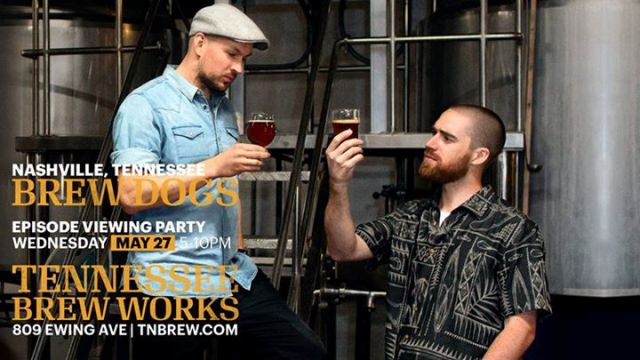 Per Matt
Wherever the Brew Dogs go, the craft beer will flow!

Tomorrow, Wednesday, May 27th, Tennessee Brew Works will host a viewing party from 5 to 10 pm to premiere their Nashville-based television episode. Previously filmed in the Music City during a very heavy February snowstorm, Brew Dogs hosts James Watt and Martin Dickie visited with local brewers and collaborated on a unique craft beer, based on the area.

Watch along with local brewers and craft-beer aficionados before the episode airs nationwide on the Esquire channel. The event is free and open to the public, featuring local beers that were mentioned on the Brew Dog show’s Top 5 list. Proceeds from those kegs (and one from Tennessee Brew Works) will benefit the Tennessee Craft Brewer’s Guild.

The episode will be shown at the brewery at 8 pm and airs nationwide at 9 pm. There will be live music at the event and guests will be on hand to discuss their roles with the Season 3 TV show. 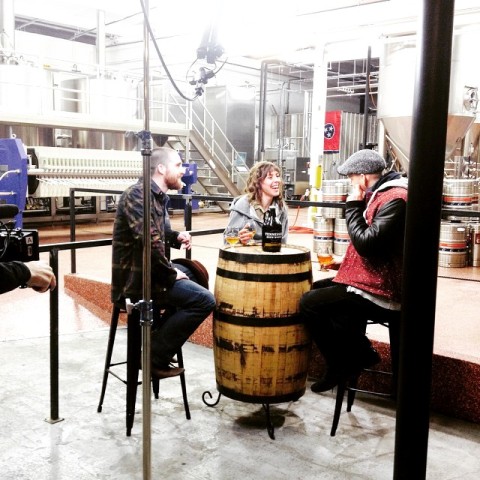 Previewing the big event, Tennessee Brew Works Founder Christian Spears answered a few questions to prepare everyone for the festivities.

What was your initial reaction when told Brew Dogs wanted to visit your brewery?
– “The process of bringing everything together with the Brew Dogs was a long one, which actually began last fall, maybe even late summer (I don’t recall exactly). After a bunch of discussions, interviews, etc, things went quiet for a good while. Then one day, out of the blue, they called and said they were coming within the month. We were excited, anxious, everything you might expect. You have to understand, I love this show and now we’re going to be on it???!!!”

“It was a rough week of filming, though. You might recall that the weather was incredibly bad the week of Feb 20th. The mayor was telling folks to stay indoors and to not leave your homes, unless it was an emergency. Laura was picking me up everyday because her Subaru could get me out of my neighborhood — it was bad out there. (Man, I really need a truck.) Nonetheless, we had a packed house for the filming of the collaboration release. Oh, the things we do for the love of beer. Since then, we’ve really just been concentrating on work. Business has been good, and I don’t think anybody has had an opportunity to stop and reflect on things yet. That’ll change this week I’m sure!”

Who collaborated to create this craft beer?
– “The beer was a collaboration between Brew Dogs, Tennessee Brew Works, Bloomsbury Farm, Jeff Senn Guitars and the Arc & Stones band… think about that for a second.”

Can you preview the Brew Dogs’ small-batch beer?
– “As a bit of a nod to Tennessee’s unusually strict beer ABV/ABW restrictions, they brewed a Session Sage Saison… but, it wasn’t just any old saison… They… well… you’ll have to watch…”

Do you have a time planned for people to discuss working on the episode?
– “I’d suggest talking to a few of the folks following the episode viewing; including Jeff Senn and Laura Burns, who spent a decent amount of time on the actual show.”

Live music will be performed at the event. Do you have a list of performers?
– “Open Jazz Jam Session from 6-8 pm! And, of course, our craft-beer-inspired food menu featuring the culinary creations of Chef Jay Mitchell!”

Do you think this episode will attract new visitors from outside Middle Tennessee?
– “Yes! We certainly hope so! Especially to our wonderful beer community!”

Have you received interest from other productions to film (and brew) at your brewery?
– “We certainly get some inquiry. We’ve actually been in a couple of music videos: the most visible was on CMT with Erik Dylan. Who knows what will happen, once the episode airs. We hope all the breweries get more attention!”

Didn’t Dr. Laura Burns say proceeds from this event will benefit the Tennessee Craft Brewers Guild?
– “So, a bunch of other Nashville breweries were highlighted in the episode, too. During the episode filming at Tennessee Brew Works, the folks from Fat Bottom and Blackstone were having some pints with us (a bunch of the breweries came for support including Cool Springs Brewery, Alliance Brewing out of Knoxville, Yazoo, Czann’s and more) and suggested that we do a big viewing party together. We loved the idea, so we’re putting all of them on tap Wednesday (the five breweries mentioned in the episode) and having some fun! The other breweries kindly donated the kegs, so we’re donating $180 per keg to the Brewer’s Guild. Go Tennessee beer!”