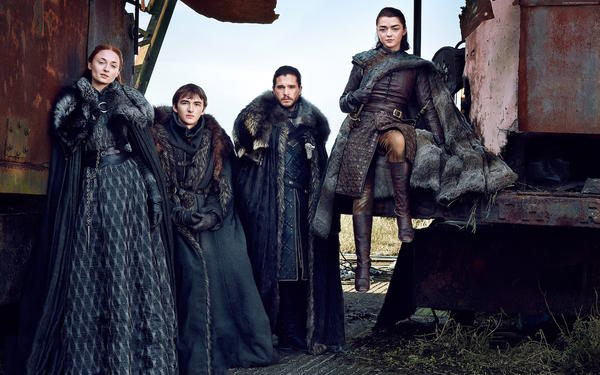 The first two episodes of Game of Thrones‘ final season have aired and it’s an incredibly slow burn of a pace instead of an action-packed dragon-fire scorcher. It seems more of a prologue of the season, rather than what we’ve come to expect from the series. With only four episodes left in the short six-episode season, there is still much to cover to determine the fate of the kingdoms.

WARNING: This post contains spoilers for the final season of Game of Thrones.

Even the epic title opening, depicting a mechanical map of the kingdom, has been scaled down significantly. The title map sequence which previously highlighted all the regions where the story takes place has been limited to mainly Winterfell, home of the Starks, and King’s Landing, home of Queen Cersei. All roads lead to a battle with the Night King and his undead army against the living at Winterfell, with the winners to contend with Cersei.

It felt like most of the two episodes were a reintroduction of the characters, as everyone gathers toward Winterfell to prepare for the eventual Zombie horde. Daenerys and her army arrive in what seems to be a miles-long line of thousands of marching soldiers, topped by a dramatic fly by of her two remaining dragons. She is accompanied by Jon Snow, who, as they arrive, still knows nothing of his true ancestry as the last male heir of the Targaryens, and Daenerys’ nephew. All of this is watched by Arya, Sansa and Bran.

And throughout the episodes, there are plenty of reunions of characters who have long not seen each other or characters who are intricately connected and have yet to interact. I couldn’t help but wryly smile when a now mature Sansa sees Tyrion again or as Arya hugs Jon. And there are cringe-worthy moments as Sam meets Daenerys and realizes she executed his father and brother. There are callbacks galore, painstakingly explained by the writers in the post show, most notably Bran’s confrontation with Jaime’s own line of “the things we do for love” from the very first episode. The episodes are rife with these scenes, almost to the point of being saccharine sweet, or as sweet as anything can get in Westeros.

Yet, for all the feelings of reunion, there is the constant presence of death. They all realize the undead are on the way and they know they will probably die. This bound by inevitable death camaraderie is best portrayed as Jaime, Brienne, Podrick, Tormund, Tyrion and Ser Davos sit around the fire, drinking wine and getting out their last bits of dialogue. A calm before the storm. The writers know you can’t have much dialogue against an army that doesn’t talk.

The best metaphor I could think up was this is the point in the video game where your party has their final interactions before the last battle. Loose plot lines are addressed. Your character can buy all the equipment you may need — there’s time for a mass smithing of dragonglass weaponry and a tally of which characters have Valyrian steel swords. This is the point where you save your game. After this, there are no safe points.