Redbox Rental: Cloudy with a Chance of Meatballs 2 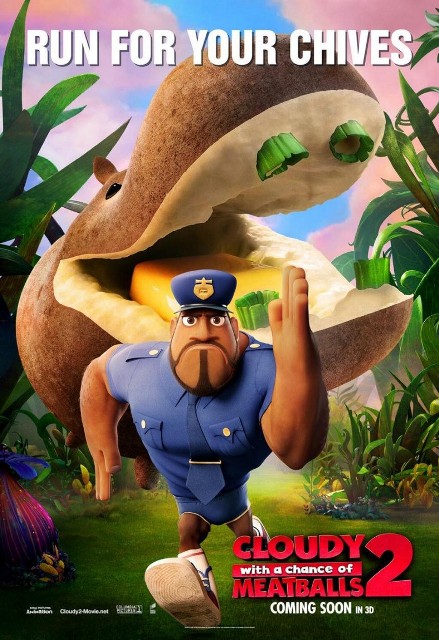 Picking up where the first movie left off, Swallow Falls is a big ole mess. That’s why the United Nations has asked Flint’s hero, Chester V, to help clean it up. In doing so, all residents are temporarily relocated to SanFranJose, where Flint is brought in to perhaps work with his childhood idol, but all is not what it seems with Live Corp. Chester V has grand plans (which are somewhat predictable), but he isn’t revealing those until the final reel.

Although the movie is based on the Barrett’s book series, this sequel centers around an original idea by the filmmakers. Unfortunately, the sequel also uses new directors, who use too much focus on the super-bright colors and characters’ exaggerated, elastic movements instead of fully focusing on hashing out an enjoyable story both children and adults will embrace. Sadly, it’s a visually fun time for the kiddies, but far less fun for the adult crowd. The storyline moves fast and furiously; oftentimes too quick to decipher the many visual and verbal jokes.

Some of the best parts of the movie are spent trying to figure out the names of the combined food creatures. All sorts of fruits, vegetables and meats are featured, including shrimpanzees, flamangos, watermelephants, Cheese Spiders and even Tacodile Supremes! Unfortunately, these creature comforts didn’t get enough airtime.

My biggest complaint was the missing link to the previous movie: Mr. T. Where was he? As Earl Deveraux, Mr. T voiced one of the most-liked characters in the first movie. In the sequel, he feels different, possibly a tad tamed. Terry Crews does a formidable job replacing him, but if the audience can tell something’s different about the character (in a bad way), that’s not a good thing.

Overall, Cloudy 2 highlights too much Chester and not enough things for Flint’s friends to do. The story’s decent, but grows a little tiresome. The movie’s fun, but definitely not recommended viewing on an empty stomach.