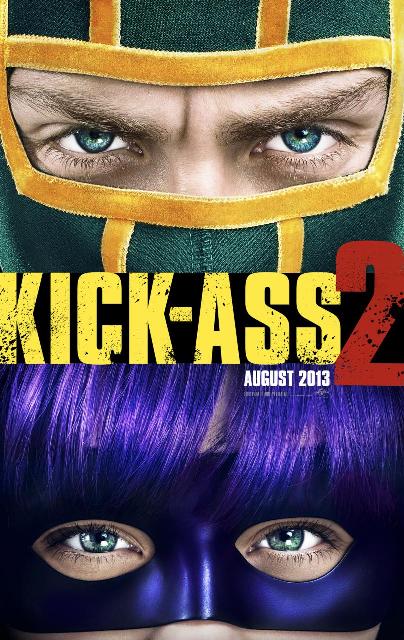 In Kick-Ass 2, Hit-Girl continues the fight for justice as long as there are criminals to take down, but Dave Lizewski’s Kick-Ass has given up being a superhero, citing it as a dangerous occupation. In the meantime, he’s inspired many copycat superheroes to fight for the greater good.

In a twist of fate, Mindy Macready’s Hit-Girl leaves her superheroics behind, transforming into an ordinary high-school Freshman and Kick-Ass returns to prominence. Teaming up with other heroes, the group forms Justice Forever to fight criminals, including The Motherfucker (Christopher Mintz-Plasse, formerly known as good-guy, Red Mist), who buys off common thugs to join his supervillian gang. One of the funniest bits of the movie was when each co-conspirator was given supervillian names.

Eventually, both Kick-Ass and Hit-Girl see eye to eye and reunite, in the name of justice and the climax results in a super(hero) battle royal.

“It’s your life. You’ve got to live it.” – Actual dialogue that represents the overall theme of the move, corresponding to Kick-Ass, Hit-Girl and The Motherfucker.

I loved the music, loved the characters, but the story seemed like nothing new. By the conclusion, both main characters understood who they really were and stopped trying to adopt a false personality (which the audience knew from the very beginning). Somehow, Kick-Ass 2 feels like a mix of Bring It On and Mystery Men.

Seeing the three main actors (Taylor Johnson, Moretz and Mintz-Plasse) was pleasing, but Moretz’s Hit-Girl steals the movie. She owns every scene she’s in and her supporting cast sports some big-name actors, including Donald Faison and John Leguizamo. But it was Jim Carrey who made all the headlines. Playing Colonel Stars and Stripes in an understated role (and a goofy grill), his low-key performance impressed me. But it was his misguided pre-release comments of not supporting the film after the terrible Sandy Hook Elementary School shooting that really turned me off.

Keep your politics out of it. Make up your mind, Carrey: Do you want the support of the Geek Community or not? You can’t have it both ways.

There’s plenty of shaky-cam fight sequences and an open-ended finale (I’d expect nothing less). I was hoping for at least one flashback scene with Nicolas Cage’s Big Daddy, but apparently, it’s included as a deleted scene. There’re talks of a final installment of the trilogy (Kick-Ass 3), but I’m a little hesitant on insisting for another sequel. This one didn’t make a ton of money, so another is iffy.

My franchise wrap-up story would include a pairing of Night Bitch and Hit-Girl on the road, moving from city to city, until they needed help from Kick-Ass. That would be great.

Strength: Real-life superheroes fight to make a difference.
Weakness: Another story where the hero doesn’t want to be super anymore?
WTF Moment: A ridiculous post-credits scene totally jumps the shark!