Vampirella: A Murder of Crows 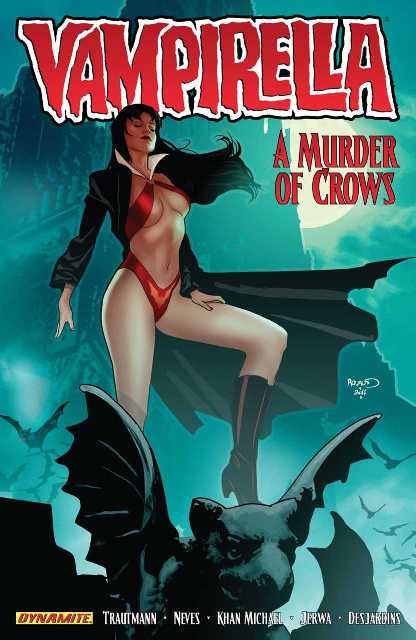 Vampirella: A Murder of Crows is a trade paperback that follows the storyline from the comic series (issues eight through 11), in which Vampirella and her human monster-hunting partner, Sofia Murray, discover a series of bizarre murders. Eventually, they uncover a trio of indestructible demonic assassins, known as the Crow Sisters, who have escaped from Hell and are marking off their checklist of sin, in order to remain on Earth.

From the get-go, Vampirella and Sofia are undermanned, overmatched and must outwit their attackers before it’s too late.

In the companion storyline, The Side Trip, the girls travel overseas, but this is no European Vacation. Faced with assisting Fausto Sabatini, an Italian Exorcist, Vampirella and Sofia will be mentally tested by a demonic spirit (and possibly a human ne’er-do-well in Germany)…

Vampirella, the comic book series, merges horror and fantasy elements with plenty of sexual innuendo to spare. The character’s origins are shrouded in secrecy that even the writers cannot decipher, due to multiple reboots (and ownership changes). That being said, here’s all you need to know: Vampirella has all the powers of a vampire with none of their weaknesses. I guess she’s a sexier version of Marvel Comics’ Blade.

The main storyline was enjoyable, although not much backstory is given. My main gripe lies with the second story — The Side Trip — which feels forced. The grungy art style is a starkly different look that the primary storyline — making it feel out of place. In addition, it’s not a standalone story, there is no conclusion, and it feels like this is only included to lengthen the book. I realize the purpose of this trade paperback is to introduce new readers to these characters, but another short storyline might have been better used.

Speaking of new readers, this was my venture into the Vampirella franchise and I was almost robbed an opportunity to see the titular character in her little red sling suit, which I’ve seen everywhere. I had no clue she regularly wears regular clothes and isn’t always looking like a pin-up model. The only redeeming factor of the second story is finally revealing the character’s outfit, which appears within the last few pages.

Overall, this is a decent introduction to the main characters, but other storyline selections might be better used to judge the series, as a whole.

Notable Quotes:
– “You reek of immortality.”
– “I want to lick their blood from my claws.”
– “You’ve never even seen a horror movie, have you?”
– “We all carry our own demons, day in and day out…”
– “That stench… I’m guessing it’s Eau de Hell, right?”
– “You’re no authority on real and right, tart. You stink of sin and blood.”
– “I should’ve known we’d just end up in the European equivalent of West Virginia.”