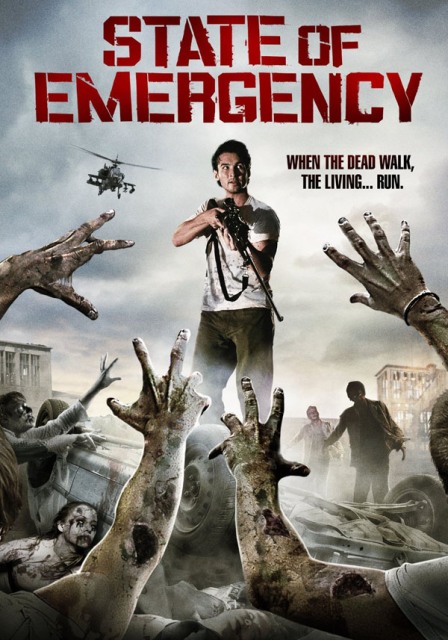 Someone, somewhere surely thought it was a good idea to cash in on the success of AMC’s The Walking Dead and make an ultra-low-budget Zombie movie, without Zombies!

How does that sense to the most logical cinephile? Going against the grain, State of Emergency is that movie. Produced by Clay Bros. Motion Pictures, practically everything about this movie was a bad idea. What were they thinking?

State of Emergency starts off with a bang, then quickly fizzles out. When a chemical facility releases a deadly toxin, residents transform into a Zombie-mutant hybrid. While these aren’t your “classic” Zombies, they’re more like the quick-moving creatures from 28 Days Later, inserted into the storyline of The Crazies. The main difference between these monsters and humans is their glowing red eyes.

Jay Hayden is a loner, who inexplicably leaves decently fortified building to join total strangers in the dark. Doesn’t make sense, but OK.

After introductions are made, the narrative is told as dialogue between characters, so there’s not much going on. People sitting around, talking is neither amusing, nor entertaining. That’s a very boring Zombie Apocalypse.

There’s very few actors involved with this movie, so the bodycount is incredibly limited. That’s not a good outline for a Zombie movie, where carnage (should) happen on a semi-regular basis. Overall, there’s just six Zombies in the entire movie. SIX!

There’s more Zombies on this DVD’s cover art than in the entire movie. Very Misleading. Bad idea, yet again.

When they do make a rare appearance, they’re always alone. Each Zombie is solo, never attacking in hordes or groups. This flick is not very gory, as most explosions happen off camera. State of Emergency does offer low-budget scares, dramatic lighting and a very shaky camera, though.

What seemed like a promising concept was more smoke than substance. The action’s not bad; the story’s not bad. There’s just too much downtime and too much talking going on. Do something, already! State of Emergency is an unremarkable, forgettable Zombie movie.