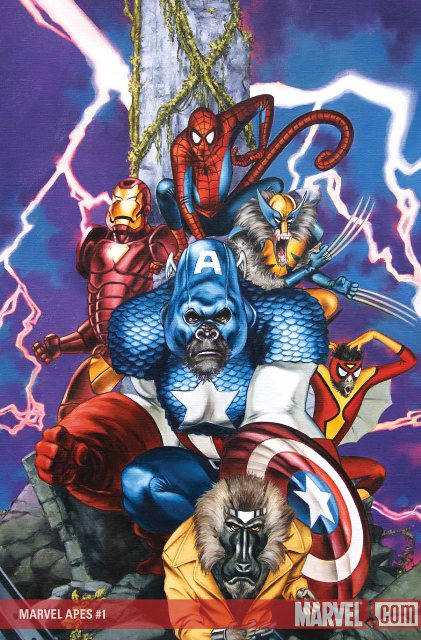 When a lab accident goes horribly wrong, a mutated-man-turned-monkey (Gibbon) and his scientist friend (Dr. Fiona Fitzhugh) are transported to an alternate universe, one ruled by simian versions of the Marvel Universe.

The Marvel Apes storyline takes place in the alternate Marvel Universe where all the superheroes are simians. Imagine Marvel Zombies meets Planet of the Apes.

These outsiders must not only fend off the Ape-vengers, X-Apes and Insimians — this universe’s version of the Avengers, X-Men and Inhumans — but the universe’s super villians as well, all the while hoping to create a vortex to return home.

The Marvel Apes version of Captain America has a narcissistic need for blood… and he’s also a vampire! A vampiric Super Ape? Only in the Marvel Ape-verse.

Summing up the storyline, there are apes in capes, Nazis and vampires! Surprisingly, as a whole, all the pieces work well together.

Besides the main storyline, included in this trade paperback is the Official History of the Marvel Apes Universe, which is quite humorous.

With all the simian-themed puns — and there are many — the biggest laughs are derived not from the character’s jokes, but from the character’s names. While a few have the same name as their human counterparts, the rest have adapted their human names to a simian theme. Thus, The Amazing Spider-Monkey, Iron Mandrill, Juggermonk and Ms. Marvape are but a few. Their names vary from funny to indecipherable.

Also included are a gallery of ape-variant comic books of classic covers.

Notable Quotes:
– “Like taking bananas from a baby.”
– “Everyone has a dark side, Roy. Everyone.”
– “You were always a sanctimonious son of a she-ape!”
– “Is that a banana, or are you just happy to see us?”
– “The mix of vampirism and super-simian serum had a completely unexpected result.”