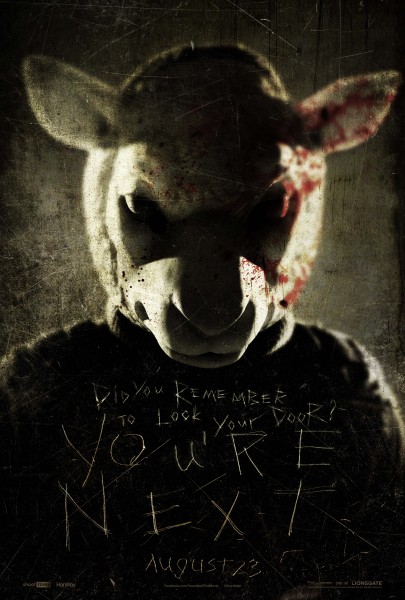 As if there were a more imposing horror-movie title, You’re Next ranks among the best of the best.

But the actual film, on the other hand, doesn’t quite live up to that top billing.

Celebrating their 35th anniversary, Paul and Aubrey Davison have gathered their family of six (along with their significant others) for a dysfunctional family reunion at their isolated cabin in the woods. Before any further backstory can unspool, the group discovers some unwelcome company (both inside and out).

Yes, this is yet another home invasion film, but this one is different: The bad guys sport animal masks fit for a child (although very creepy in this scenario). As if they were chasing prey, the intruders hunt down each of the family members, one by one. No reason is given… until the very end.

Similar to The Purge, You’re Next showcases different horrific scenarios of a home break-in, but this one offers a twist: one of the houseguests holds a secret that could very well spoil the party-crashers’ plans.

Sharni Vinson is superb as Erin, the Aussie co-ed — which could very well be her U.S. breakout role. As the storyline progresses, her secret slowly unravels. Speaking of storyline, it’s paper-thin. There’s really no backstory behind the bickering family, whatsoever. I expected to learn a little about each one as they all gathered ’round the dinner table at the beginning of the movie. But that never happened. Instead, the audience is whisked directly into the non-stop action sequences (which are great, by the way), for the full 95 minutes.

When survival depends on creating weapons out of every-day tools around the house, the characters succeed in finding many sharp objects (and for some reason, there’s lots of butcher knives within this house).

It’s a quick-but-very-bloody movie that makes sure to maintain your attention span — in light of the multiple plot holes. Many of the characters’ deaths are predictable and a few horror stereotypes are employed, as well.

This thriller blends horror and humor, leaving the blades running until there’s nothing left… but a bloody mess.

Strength: Great action, sprinkled with some scares.
Weakness: An extra helping of backstory would be nicely served.
WTF Moment: One plot device is borrowed from a well-known Macaulay Culkin movie!