Reviewing The Walking Dead: A New Frontier From The Gallows 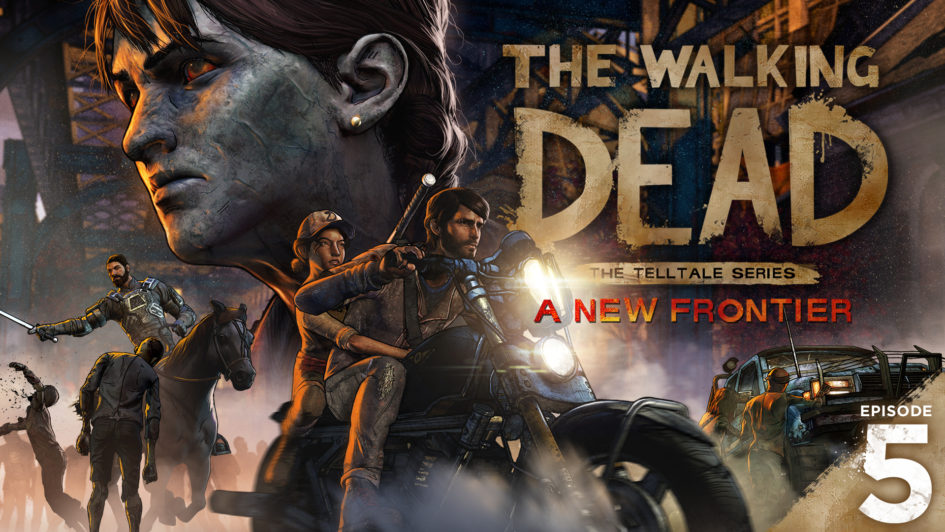 Telltale Games has released “From the Gallows,” the fifth and final episode for their Season 3 story by The Walking Dead: A New Frontier. And today I am going to review it for you here, on #HauntLife.

A couple of weeks ago, I did a full review of the first four episodes in this series. So, if you haven’t had a chance to read that part, be sure to go HERE and look it over.

From that review, you probably already know that I am just not feeling this season of Telltale’s Walking Dead franchise. The storyline just is not working out for me. I know the games are in the comic book universe, which I have some background with, but it felt like it just was not flowing well. As I said, I would wait for Episode 5 to release before I gave my final review. Now that it is out, I will give my final grade.

But first, here is the spoiler warning for what happened using the choices I made in the game. Since the game is swayed by your choices in the game, your mileage my vary.

At the end of Episode 4, Javier and crew raid Richmond to save his brother, David, from execution. However, things go south quickly. In the end, Kate crashes the getaway truck into one of the walls of the town, allowing a Zombie horde to invade.

Kate, as Episode 5 begins (minus a flashback scene), barely escaped from death and is able to find Javier, David and the remainder of their team as the town is infested with walkers. They make their way to one of the buildings in the town with several other citizens and barricade themselves in.

Inside the building, Kate meets a woman named Fern, whose husband Rufus, was bitten by a walker. Fern pulls a gun on Javier, blaming him for the attack on Richmond, but Kate steps in between them. Consumed by guilt, Kate begs Fern to kill her, as she is the reason the wall was breached. Before anything else happens, David enters the room, breaks Fern’s arm, and then kills Rufus with a headshot to prevent him from turning. Seeing the shocked faces of everyone around, David just leaves for the roof.

Javier goes upstairs to speak with David. David explains that he has to do what is best for the group, not a single person. Javier begins scolding him for his actions, then realizes that David has moved to the edge of the roof. Backing off his scolding, Javier is able to talk David down as Kate comes in.

The group comes up with the idea to use a bulldozer to block the hole the walkers are coming in from, in order to save Richmond. With the construction yard being a short distance away, they make a break for it. Along the way, Tripp dies trying to cross a bridge. But the rest of the group make their way to the garage.

Once inside, David and Kate begin arguing. David wants to leave Richmond to the walkers, while Kate, still consumed by guilt, wants to help save the city and the survivors. Gabe sides with his father, while the rest of the group follow Kate. Turning to Javier, Kate gives him an invite sealed with a kiss. Seeing this, David attacks Javier. Javier tries to talk sense into his brother and let him know he loves him, but David is blinded with rage. As he begins choking Javier, Clementine shoots David in the shoulder, wounding him and ending the fight.

The gunshot and fighting gained the attention of walkers, who then begin entering the garage. David grabs his son, Gabe, and escapes, leaving the remaining group to fend for themselves. Narrowly surviving, Javier decides to stay with Kate and help save Richmond.

With Javier and Clementine providing support, Kate drives the bulldozer. Meeting up with Jesus and his team, they are able to lead the herd out of Richmond and plug the hole in the wall. The city of Richmond is safe.

Concerned about his brother and nephew, Javier takes off to find them, along with Clementine. A short search finds David dead and Gabe bitten. Knowing his time is up, Gabe shares a moment with Clementine, both of whom had grown fond of one another. Javier gives Gabe a gun to end his suffering, in a moment that was extremely sad. Javier and Clem return to Richmond to let Kate know of David’s death. Heartbroken, they retrieve his body a few days later. They bury his dog tags and Kate leaves her wedding ring behind on his grave. Javier and Kate then begin what appears to be the start of a relationship together in their new home.

That was a pretty strong ending for this season. I mean, if I was to compare this to a season on the TV show, I would have to say it is right up there with Season 2. David definitely gave me the whole Shane Walsh vibe. He wanted to do what was best to save as many people as he could. But, like Shane (and to paraphrase Andrea), his delivery sucked. Instead of uniting the people behind him, he took things into his own hands, losing his humanity in the process. It made for a very interesting dynamic in the game that became very apparent in this last episode. Like Shane, David was in love with a woman who was in love with another man. Like Shane, David would kill anyone to protect his group. Like Shane, David almost killed his “brother” (Shane was like a brother to Rick) out of anger and jealousy. So much TV Season 2 exists in this season finale.

So, what do I think? Do I think this episode redeemed a rather bland season? No. If I could pull this episode out as a standalone piece, I would give it a solid five out of five. But I am here to judge the whole body of work, and thus all I can still only give The New Frontier three out of five stars. Had the attention to tell an exciting story been evident in the first four episodes, this whole season would have been much better. I would suggest trying this out if you love the Telltale Series or just love The Walking Dead, like me. But I have to give it a “I’ll Pass” vote for anyone else.