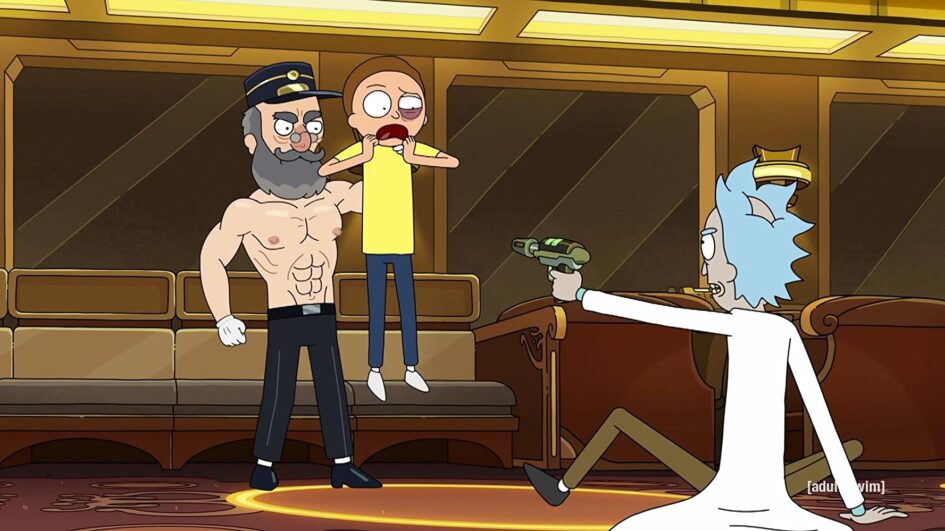 Per Matt
Not quite the storytelling techniques of Save the Cat, but in addition to the bizarre misadventures of mad scientist Rick Sanchez, along with his willingly wishy-washy grandson, Mortimer “Morty” Smith Sr., the first new Rick and Morty episode of 2020, “Never Ricking Morty,” brings something more to Season 4…

Fans of the animated show expect all of the meta, fourth-wall-breaking jokes, searing cynicism, storytelling tropes and from time to time, the self-awareness that mocks the very reasons the show has become popular in the first place. This entire episode offered jokes piled upon jokes, while basically breaking down Dan Harmon’s “The Story Circle,” which he uses religiously when creating new episodes of his television series.

Flashbacks, flash forwards and even some sideways “What If” clips are shown (Were they canon? They could have been!) as Story Master entraps our heroes into an anthology episode. Seemingly based upon Snowpiercer, the episode features minor characters recalling seemingly random stories about Rick and Morty that we, the audience, never knew existed. Multiverse theories abound as the dynamic duo actually become story devices, themselves, eventually leading up to a holy deus ex machina.

Wannabe writers should definitely take note. Having read different themed books, attended a variety of writing classes in college and soaked up every bit of knowledge available at screenwriting conferences, I recognized a lot of the mentioned story elements, plot devices and structure. Canon or not, this incredibly creative story has long been overdue. Will the previous season’s silly stories be counterbalanced by something else entirely as Season 4 winds down?

Having previously won the 2018 Critics’ Choice Award for Best Animated Series, fans have been annoyingly howling for new episodes for what seems like forever. Never knowing what to expect — Remember the April Fool’s Day prank? — on so many different levels, Dan Harmon and Justin Roiland delivered… and then there was the non-functional Story Train link which I’m sure just about everybody hoped would work. Previously, it was just a broken link, but now it simply forwards the viewer to Rick and Morty‘s Adult Swim portal. Never waste a good advertising opportunity!

There’s no telling where the remainder of the season will lead the Smith family, but with so many unresolved plots floating about the show’s multiverse, hopefully we’ll see: More of Tammy and Phoenixperson! A backstory for Professor Poopybutthole! A one-on-one battle between the Mortyest of Mortys and Evil Morty! And absolutely more Blips and Chitz!

Poor Morty continues to experience a high level of emotional trauma this year, so here’s to hoping the character can actually achieve a higher quality of life… but how could that possibly offer a satisfyingly silly storyline? The return of previously missing characters (Morty Jr. perhaps?) could be fun. What about another Pickle Rick adventure? Nah, we’ve waited this long, here’s to something new, not something rehashed from the past.

Now that new episodes have returned, I’ll be paying particular attention to all of the Easter Eggs, while trying to hatch future episode possibilities in my head. Maybe Harmon’s “Story Circle” could branch off into something even bigger and better for next season, as if that’s remotely possible. But definitely bring back more story-writing plot devices for all of the writers out there to enjoy!