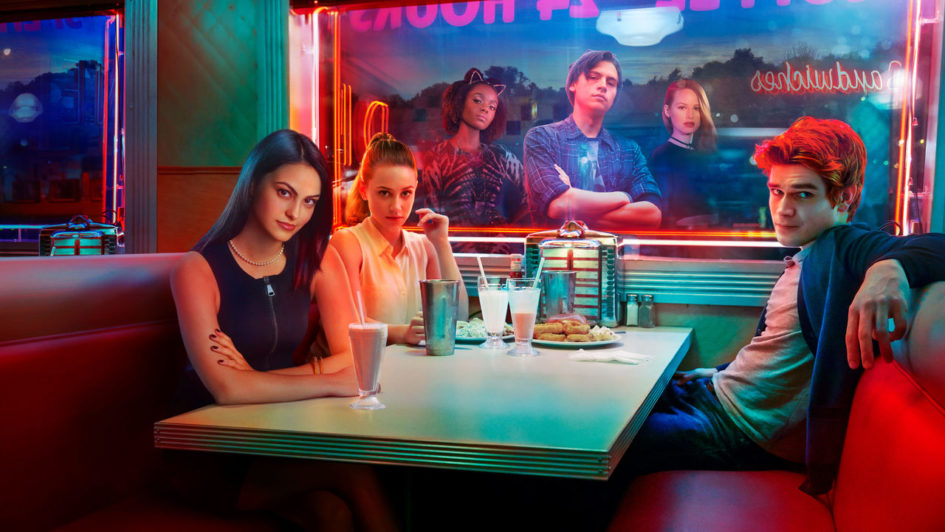 The names Archie and Jughead typically symbolize a small-town Americana that is eternally set in the 1950s, but in CW’s sleeper hit, Riverdale, Archie and the gang are reimagined as a present-day masterpiece. As much as I didn’t want to love this show, the truth is it has become my guilty pleasure. Upon first glance, it seems easy to write off as yet another teen drama, a la 90210. However, the show (and its superb cast) manages a balancing act of the perfect combination of mystery, drama and suspense — no matter how predictable it is at times.

Loosely based on the Archie comic series, titular character Archie Andrews is still the homegrown, redheaded, All-American kid who plays football and the guitar. He is still caught in an angsty love triangle with Betty, literally the girl who lives next door, and Veronica, the pampered daughter of wealthy socialites. However, characters are where the similarities between the Archie comic-verse and Riverdale cease.

Season 1 begins with the grisly murder investigation of one of Riverdale High’s star athletes, the affluent Jason Blossom. His twin, Cheryl, and their family reek of gothic mystery from moment one. It doesn’t take very long to realize that Jason Blossom is a fella who gave a lot of people some pretty strong motives, and further down the rabbit hole you begin to fall. With Season 1 now available on Netflix, it’s an easy binge-watch at only 13 episodes. (You’ll have to catch Season 2 episodes on the CW website or mobile app for now.)

Part of the appeal of this “Dark Archie” universe is the phenomenal job that the show’s writer does of it making it believable. It wouldn’t have nearly the same impact if Archie and his pals were as cliche as their original namesakes. Sure, the gang still hangs out Pop’s 50s-style diner, but it’s to gossip, date, people watch and occasionally partake in dealings with biker gang members from the wrong side of the tracks. With the return of Scream star Skeet Ulrich playing the gang’s leader, I can understand why one would want to turn to a life of crime. Even the show’s characters allude to the fact that the innocent Riverdale is no longer than quiet town it used to be with the murder of Jason Blossom looming above everyone’s heads. Even bereaved sister Cheryl, the queen bee of Riverdale High, waxes and wanes in her temperament following her twin’s death, as one would expect.

The Blossom family adds an element of mystery that makes for some alluring storylines. Their family home is something akin to Crimson Peak, and Cheryl’s borderline creepy obsession with her dearly departed brother hints at a family where things aren’t quite right. Unsurprisingly, they are more intertwined in the town’s history and politics than they let on. I’ll not spoil anything, but I’ll confirm that the eerie sense of dread that Mr. and Mrs. Blossom will leave you with is not unwarranted.

Whether or not you’re familiar with the Archie comic series, Riverdale is a highly entertaining watch. It isn’t exactly kid-friendly, following storylines that include sexual assault, revenge, murder and embezzlement. Throughout all of this, however, Archie and his pals make the best of it, and their friendships and the timeless tale of teenagers struggling to do the right thing is utterly redeeming.