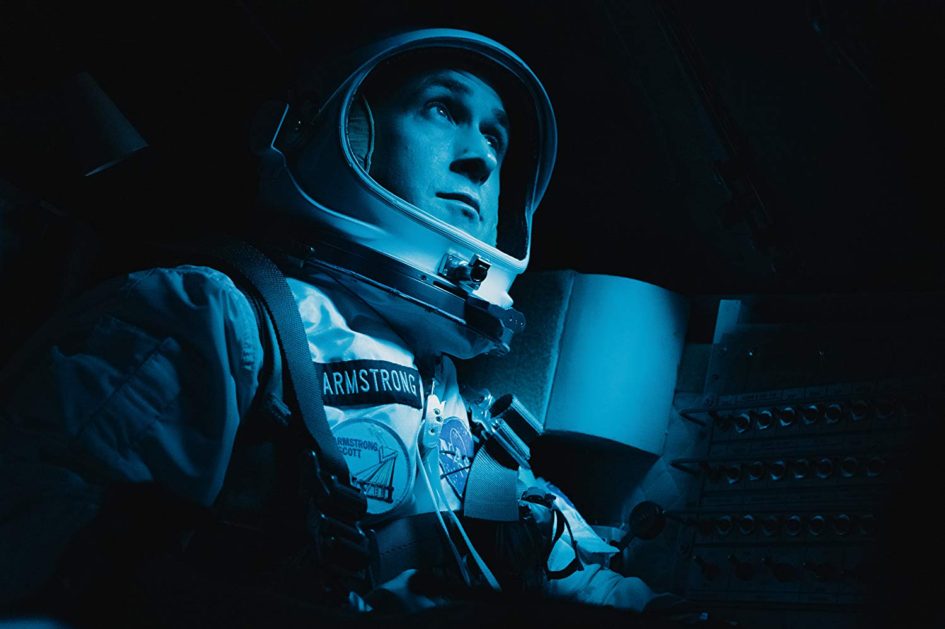 Ryan Gosling looks toward the future and aims for the Moon in First Man.

Per Matt
First Man is being hyped as a critically acclaimed movie that depicts Neil Armstrong’s fated journey in becoming the first man to walk on the moon, but it’s really just a complicated tale about a man who overcomes personal and professional tragedies, while also being emotionally bankrupt.

Over the last few years, my favorite Movies of the Year just happened to involve science fact, along with a healthy dose of science fiction. The Martian and Hidden Figures were well-crafted stories that involved outer space, personal loss and overcoming long odds in order to succeed at the box office among filmgoers. But if you’re expecting First Man to be anything remotely like those previously mentioned films or something like Interstellar or even Gravity, you’re looking for the wrong type of film.

Based on James R. Hansen’s book, First Man: The Life of Neil Armstrong, the film by Director Damien Chazelle starring Ryan Gosling is a biopic that feels like it’s trying really hard not to offend anybody, and that’s a shame, because the subject matter is incredible… and incredibly American. It’s also centered around one of the country’s greatest feats, while not displaying one of the most iconic images imaginable: Planting the American flag on the lunar surface.

Character development is a problem with the main subject matter. Armstrong’s internal turmoil plays a huge role in his characterization here. From the death of his young daughter, to losing his test pilot job, to losing multiple coworkers and friends at NASA due to tragedies, Armstrong (played by Ryan Gosling) never really expresses any emotions other than a blank stare. (The audience doesn’t even get a voice over to express his pain.) He doesn’t discuss the deaths of his family and friends, doesn’t express any negativity whatsoever during his failures at NASA, but just keeps plucking ahead. Also, his wife, Janet Shearon (Cliaire Foy) mostly gets shown in a negative light. Neither character gets much to work with, which may either be the fault of the screenwriters or the original book’s author.

Silence plays a major role in the movie, practically becoming a secondary character both on Earth and in outer space. There’s long stretches (at least they felt long on the screen) of uncomfortable silence, as well as reaction shots from outside the Apollo 11 (There’s no sound in outer space!), looking in on the claustrophobic action.

Unfortunately, the first half to two thirds of the movie employed an unnecessary shaky camera that pulled me out of the movie multiple times (along with a minor case of motion sickness). The rocket scenes were mostly indecipherable, due to shaky steady cams, loud explosions, radio control blasting commands and other random sound effects. Then there’s the whole flag controversy. I never once saw the flag in the movie and that’s a shame, as it was a very important and noteworthy event in history. From what I’ve seen online, Chazelle didn’t want to show it so he wouldn’t offend anybody who wasn’t from the United States. While that may or may not be accurate — I’m still unsure — what is a fact is the main star of this movie hails from Canada and the director was born in France (and currently has French citizenship), so there’s that.

Neil Armstrong may have been a flawed family guy, but he was a brilliant engineer and pilot. There’s lots of great small moments in First Man, but there’s never anything huge that’s noteworthy, pushing the film into my Top 5 Movies of the Year category so far. Instead, the story of an incredible American is somewhat depicted onscreen, even if his greatest personal accomplishment isn’t shown.